The #92 Porsche 911 RSR of Michael Christensen, Kévin Estre and Laurens Vanthoor secured a comprehensive GTE Pro victory in the 86th running of the 24 Hours of Le Mans. In GTE Am, the #77 Dempsey-Proton Racing Porsche 911 RSR of Julien Andlauer, Matt Campbell and Christian Ried made it a double victory for the German marque in its 70th anniversary year. 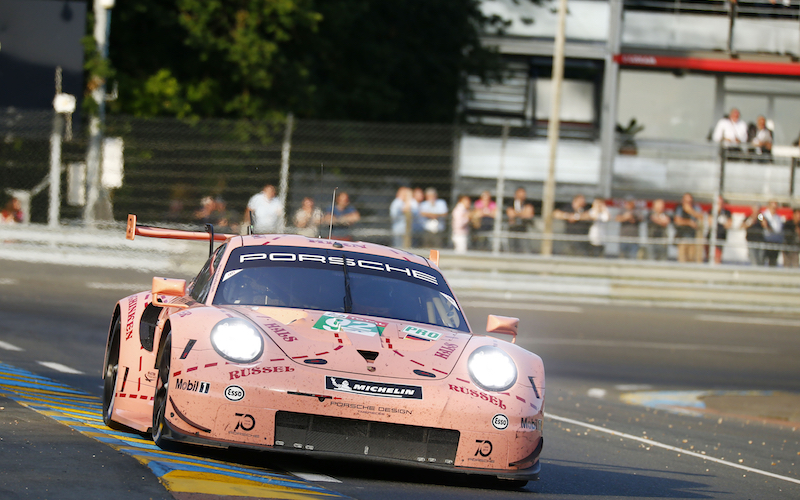 The GTE Pro race had been one of the most hotly anticipated in years, with a total of 17 cars from six different manufacturers set to do battle in an all-out sprint for victory. Porsche had locked out the front row and made an excellent start to the race.

However, a number of interruptions to the racing in the early stages of the 24 Hours allowed Porsche’s GTE Pro competitors, particularly the Fords and the BMWs to stay in check. The Christensen/Estre/Vanthoor trio share just eight Le Mans starts between them, but they put together a flawless performance to take their maiden class wins at Le Mans.

The sister #91 car of Gianmaria Bruni, Richard Lietz and Frédéric Makowiecki finished in second position, but it was troubled throughout Sunday morning by the hard-charging #67 and #68 Ford GTs.

Third place went to the Dirk Müller, Sébastien Bourdais and Joey Hand #68 Ford GT after an excellent battle with the #91 Porsche as the hours ticked down. The Fords evidently had the pace to keep touch with the Porsches, but it was the German cars’ superior straight-line speed that gave them the advantage.

The #82 BMW Team MTEK M8 GTE of Antonio Felix da Cost, Augusto Farfus and Alexander Sims had been battling for a podium position as the race progressed into the evening, but a nasty accident for British driver Sims put paid to the team’s chances on its debut with the new-for-2018 M8 GTE.

Corvette Racing and Aston Martin Racing simply did not have the pace or good fortune to challenge the leaders in GTE Pro, although three of the four cars came through to finish the race. The #64 Corvette C7.R was forced to retire in the early evening due to rear suspension damage. 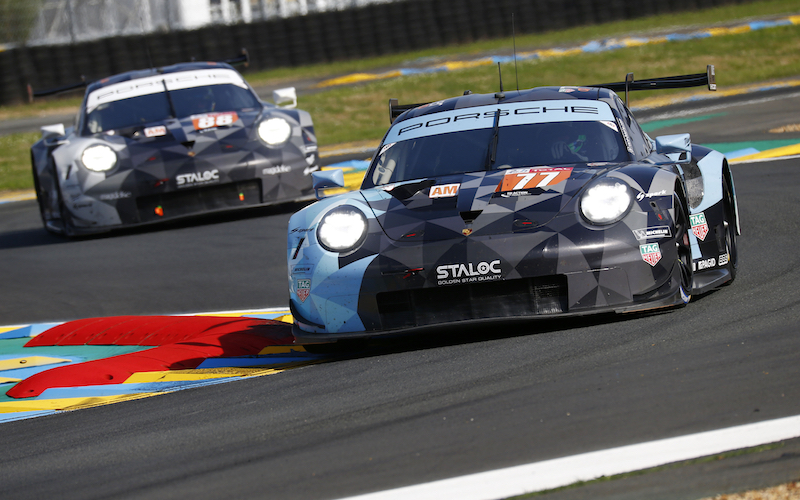 Success for Porsche in the GTE-Am

GTE Am was also a story of Porsche domination, with victory going quite convincingly to the #77 Dempsey-Proton Racing 911 RSR of Christian Ried and Le Mans debutants Julien Andlauer and Matt Campbell.

Much like its GTE Pro cousin, the #77 car looked peerless for much of the race, with its mixture of young and experienced driving talent not putting a foot wrong for 24 hours.

Second position went to the #54 Spirit of Race Ferrari 488 GTE of Giancarlo Fisichella, Thomas Flohr and Franceso Castellaci. The final position on the podium also went to a Ferrari, the #85 Keating Motorsports 488 GTE with Jeroen Bleekemolen, Ben Keating and Luca Stolz behind the wheel.