The sun has risen over the Circuit de la Sarthe and Toyota holds a commanding lead at the head of the Le Mans field. In GTE Pro, the #92 “Pink Pig” of Michael Christensen, Kévin Estre and Laurens Vanthoor leads by a couple of minutes. 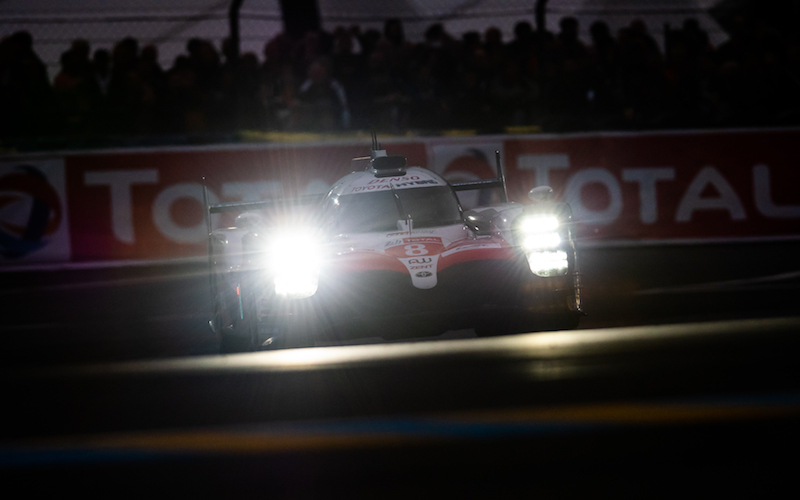 The 86th running of the 24 Hours of Le Mans took another turn as darkness drew in at the Circuit de la Sarthe. The #17 SMP Racing BR01 driven by Matevos Isaakyan, who was in third place at the time and in a position to trouble the works Toyota hybrids should they run into any issues, had a serious off at the Porsche Curves. The Russian driver attempted to remove the rear bodywork so that he could make it back to the pits, but his valiant efforts came to nothing and the team was forced to retire the car.

This left the Beche/Laurent/Menezes #3 Rebellion R13 in third place, and the pair of Toyotas battling it out for the lead up front. The works cars had been battling closely for much of the evening, but it was the #7 TS050 Hybrid of Mike Conway, Kamui Kobayashi and José María López that established an advantage into the night.

The lead grew to over two minutes after the #8 car, driven by Sébastien Buemi, was handed a one-minute stop-go penalty for speeding in a slow zone. However, an outstanding stint by Spaniard Fernando Alonso in the early hours saw the #8 car gradually eat away at its sister car’s lead – at some points by as much as two seconds per lap –, with Buemi subsequently retaking the race lead at dawn. 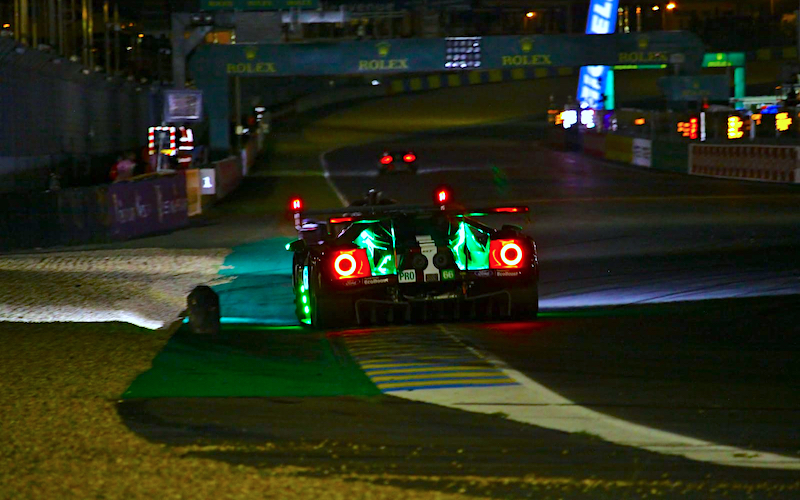 Porsche leads in Le Mans by a couple of minutes

In GTE Pro, the Christensen/Estre/Vanthoor #92 Porsche 911 RSR holds a lead of over two minutes at dawn after in Le Mans running without issue through the darkness hours. The Porsches have been the class of the field in GTE Pro, but both US-entered cars have run into issues, particularly in the case of the now-retired #94 machine.

All other GTE Pro cars bar the #82 BMW Team MTEK M8 are still running, with the #68 Ford GT of Sébastien Bourdais, Joey Hand and Dirk Müller just a handful of seconds behind the second-placed Porsche.

It’s been a relentless drive so far for the #26 G-Drive Racing Oreca, with Russian Roman Rusinov leading the category by a lap on Sunday morning. The #23 Panis Barthez Compétition LIgier JS P217 of Timothé Buret, Julien Canal and Will Stevens has also had an impressive drive so far, and remains in a solid second place with eight hours of the race remaining.

GTE Am has become a battle between the #77 Dempsey-Proton Racing Porsche 911 RSR and the #85 Keating Motorsports Ferrari 488, with the #77 car’s holding a lead of around 2.5 minutes at dawn.

Click here to read what happened in the first six hours