Porsche on top in Free Practice 1

The #2 Porsche 919 Hybrid of Romain Dumas, Marc Lieb and Neel Jani topped the time sheets in the first practice session for Sunday’s 6 Hours of the Nürburgring. G-Drive Racing headed the field in LMP2, while Ferrari and Aston Martin took the honours in GTE Pro and GTE Am. 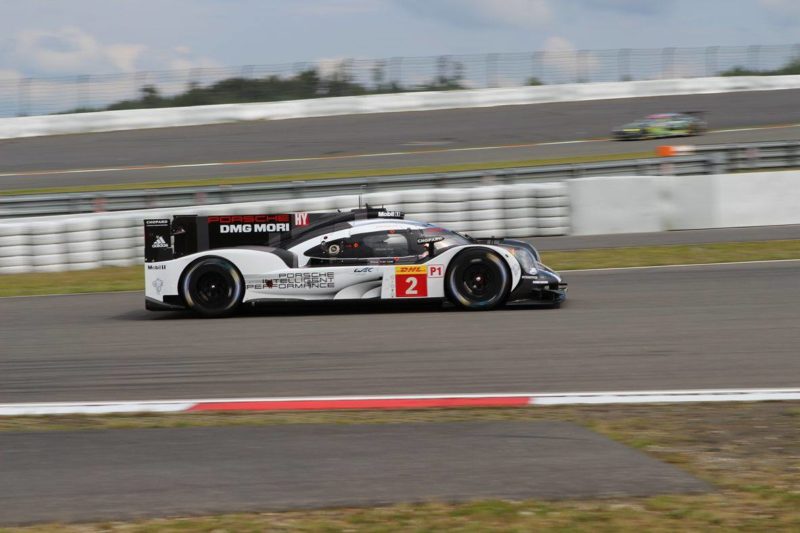 With Thursday’s storms long gone, the weather was sunny and pleasant for the two-hour session. A full course yellow came relatively early on with the Signatech Alpine LMP2 car stranded at turn 1 with suspension issues. Later, the session was ultimately red flagged due to a system failure at race control, with the stewards losing the capability to message teams.

The Audis held the advantage long into FP1, with Oliver Jarvis and then Marcel Fässler going quickest with just eight minutes gone. Fässler’s 1:42.706 held until Lucas di Grassi and then Loic Duval improved after just under an hour. As the session neared its close, Marc Lieb produced a 1:41.703, which proved to be the fastest time of the day.

The #1 car of Bernhard/Hartley/Webber completed the session in second position, just 0.047 seconds down on the sister car. Then came the two Audis 0.2 and 0.5 seconds behind, and the pair of Toyota TS050s with fastest times of 1:42.593 (#5) and 1:43.635 (#6). Further down the LMP1 field, the #13 Rebellion Racing machine of Imperatori/Kraihamer/Tuscher topped the privateer times, just 0.004 seconds ahead of the sister car, with the #4 ByKolles entry only six tenths further behind.

In LMP2, the #26 G-Drive Racing Oreca of Brundle/Rast/Rusinov finished in first position, with Alex Brundle completing the car’s fastest lap on his final tour of the session – a 1:50.748. Rast was the second-quickest driver in the session in the same car.

Second on the time sheets went to the #44 Manor Oreca of Tor Graves, WEC debutant Antonio Pizzonia and Brit Matt Howson. Howson went quickest of all with a 1:51.436. Strakka Racing rounded off the top three, with Johnny Kane going fastest for the British-entered team with a 1:51.469.

In GTE Pro, the #51 AF Corse Ferrar 488 of James Calado and Gianmaria Bruni set the pace, with the British driver going fastest with a 1:58.402. Within six tenths of the leading Ferrari were the pair of revitalised Aston Martin Racing machines. Darren Turner was the fastest man in the #97 machine, posting a 1:58.601, with Nicki Thiim just four tenths behind with a session  best of 1:58.982.

The #98 Aston Martin Racing car of Dalla Lana/Lamy/Lauda was the fastest machine in GTE Am, with the experienced Portuguese driver Lamy the only man under the two-minute barrier with a 1:59.949. Almost a second further back was the #50 Larbre Competition Corvette, with fit again Paolo Ruberti setting its fastest lap time. The #83 AF Corse Ferrari 458 Italia rounded off the top three with a session best of 2:00.890 at the hands of Emannuel Collard.