Porsche leads at halfway in Japan 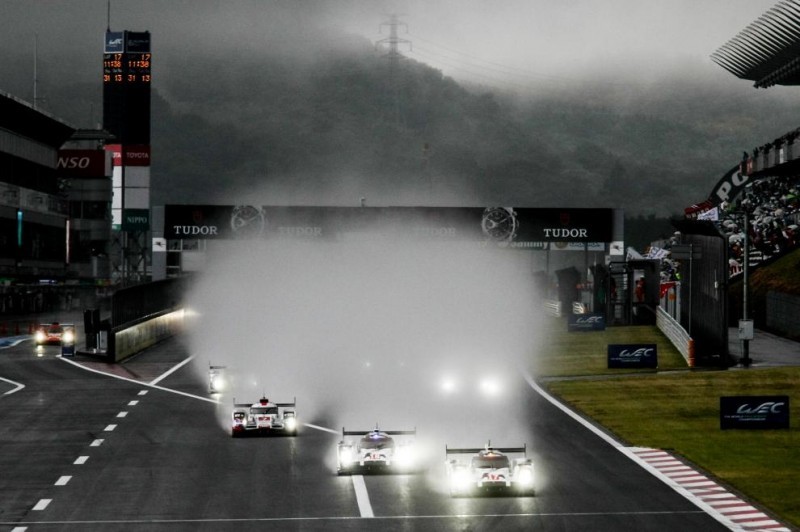 The weather has been the dominating factor at the 6 Hours of Fuji so far. Before the race had even started, the race director Eduardo Freitas announced that it would begin under safety car conditions. The rain brought back memories of the 2013 race, in which not a single green-flag lap was completed.

The safety car phase lasted for 17 laps or 40 minutes, but then the 31 cars were unleashed onto the Fuji circuit. In LMP1, battle commenced between the Audis and the Porsches, with Toyota closer to the front of the pack in damp conditions. Marcel Fässler and Mark Webber set off on a cut-throat battle for the lead, exchanging places almost every lap. The Porsches appeared to have the edge as the track dried, with firstly Romain Dumas then Marc Lieb making their way to the front of the field in the course of the first three hours.

Full wet tyres were the only option for the prototypes in the first couple of hours, but with the track drying the race engineers have been forced to make a decision on when to change to intermediates. Toyota were the first to blink, trying out slicks on the delayed #2 car, but the conditions were still too wet for the compound to work. The threat of further rain is also very real, meaning that the LMP1 race battle hangs very much in the balance.

In LMP2, Nick Tandy once again proved his credentials with a stunningly quick drive in the #47 KCMG Oreca to lead at halfway. The #36 Signatech-Alpine had made the early running in the hands of Paul-Loup Chatin, but a hard-charging Tandy took over the lead after the second round of pit stops.

GTE Pro has been about Porsche versus Ferrari. The #71 machine with James Calado behind the wheel led early on, but he was overtaken through the first round of pit stops by Toni Vilander in the #51 car. The Finn held his lead at the halfway stage, ahead of the two works Porsches.

In GTE Am, an impressive, but incident-packed stint by Patrick Demspey in the rainy conditions put the #77 Dempsey-Proton Porsche in a solid position early on in the race. Marco Seefried continued to lead at the halfway point, with the #72 and #83 Ferraris chasing hard behind.