The ACO turned up the excitement levels for next month’s 24 Hours of Le Mans even further last week by revealing some aerial shots of the brand-new Arnage complex. WEC-Magazin has been on the road to find out exactly what kind of views await spectators from the new enclosure. 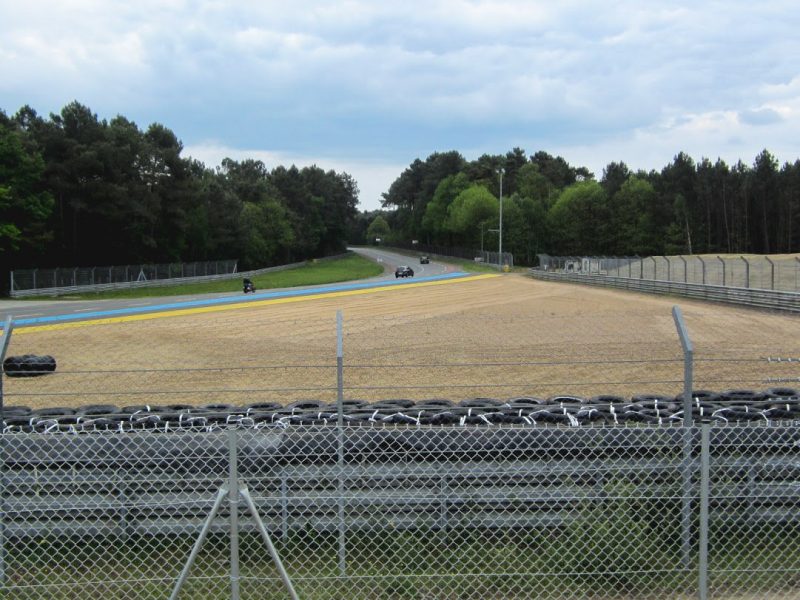 The view from the new enclosure (scroll down for more)

Arnage and Indianapolis are two names that are synonymous with the Circuit de la Sarthe. Ever since the race was first run in 1923, spectators have flocked to the complex to watch the cars screaming down from Mulsanne, taking the slightly banked left-hander at Indianapolis, dabbing the throttle before slowing for the tight right-hander at Arnage, the slowest point on the circuit.

For spectators, this back section of the track has barely changed over the years – with the steep embankments and makeshift staircases not exactly providing the best access for fans with limited mobility. 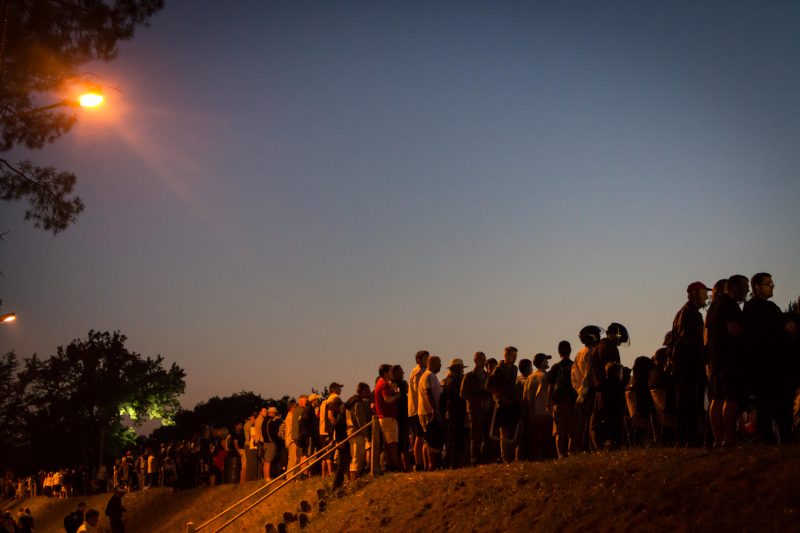 Last year, the city of Le Mans announced major roadworks at the site of Arnage corner, which is, in normal operation, a major accident black spot. With the new piece of road running straight through the old Arnage spectator area, this gave the ACO the chance to restructure the Arnage/Indianapolis complex and bring it in line with modern access requirements. 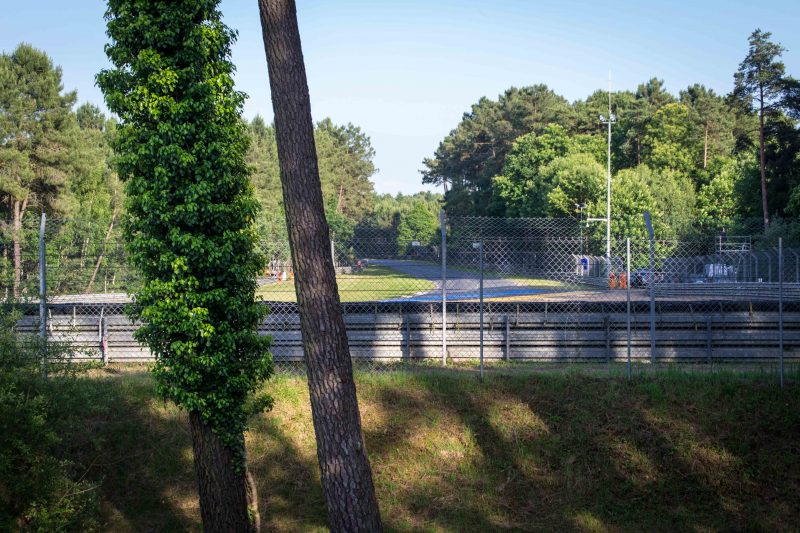 The best available view of Indianapolis up to 2016.

Far from decreasing the size of the viewing area, or even removing it completely, the ACO have decided to shift the spectator enclosure from the short run on the outside of Arnage to the exit of the fast right-hander before Indianapolis.

This brand-new spectator area will give fans a fantastic opportunity to watch the cars at maximum speed as they sweep down the forested section of track between Mulsanne and Indianapolis – the scene of many incidents over the years, including Loic Duval’s shunt in the #2 Audi last year. 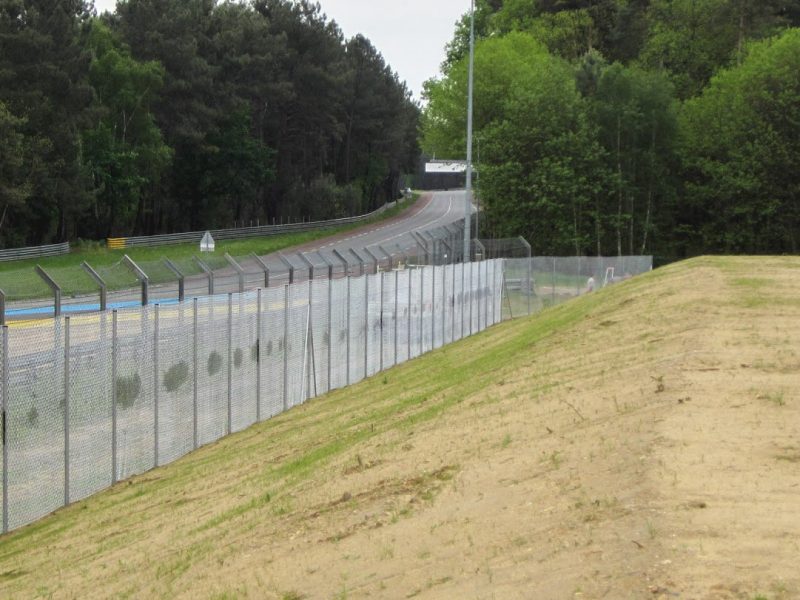 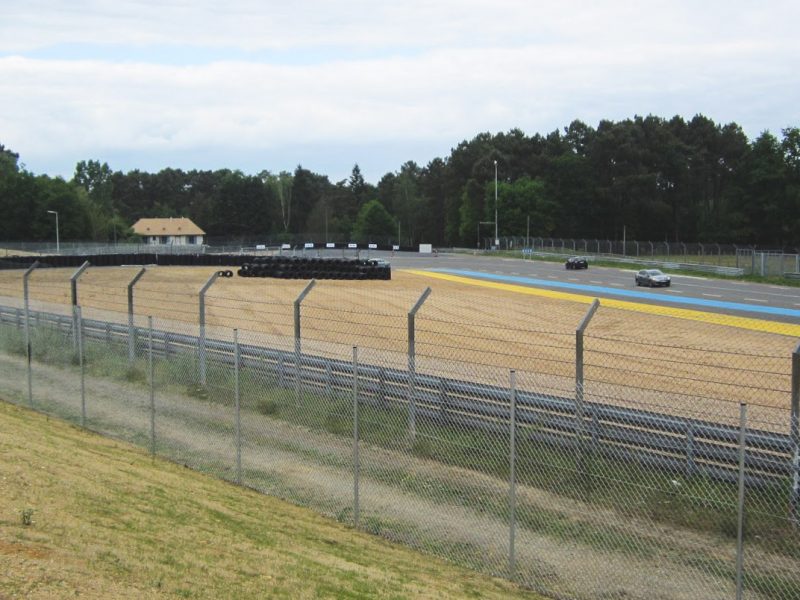 The loss of the Arnage enclosure certainly removes some of the circuit’s character, as well as the chance to see glowing brake disks and flaming exhausts as the cars make their way down to the Porsche Curves. But the new area will give fans a brand-new opportunity to see LMP and GTE cars at the absolute limit.

The inside portion of the Porsche Curves or some call drivers right is still open to the public. Its the outside or drivers left that now is taken up by the private areas.

Hi David, thank you for the update.
However, I’m not sure to understand exactly the main changes. I saw the new look of the Arnage surroundings, but what exactly will be the spectators area?
As you saw it in real life, is it correct to tell that we will still be free to walk along the track from the entry of the spectators area at the Arnage turn (where the shuttles dropped the fans last year and where there is now a new roundabout) to the Indianapolis curve (remaining of course inside of the curve) ?
Have all the embankments disappeared? Would be a shame as it gave a unique view on the car in my opinion.
Thanks for letting me know.

Hi David,
The short answer is: I don’t know.
A road now runs straight through where the former Arnage viewing area was, so some of the banking has certainly gone. However, the area was open (but overgrown with grass and some of the front barriers were broken) from Indianapolis down to roughly where the advertising bridge is (if you know where that is?) It appears likely to me that another fence will be erected here, given the condition of the embankment and the barriers at the front, but I could be wrong on that.
It may be the case that spectators can still access the outside of Arnage corner, where the shuttle drops fans off, but IMO I believe that this is unlikely. Unless it is a separate, and very small, enclosure.
We will be able to give you more information after test day.

So The Arnage enclosure is gone, the outside of the first Porsche curve has gone to a private camping firm, a big section of the inside of the first Porsche curve fenced off by another private camping firm last year, probably the same area will be taken again this year. The Indy viewing area looks good, but giving by one hand and taking with the other seem to be the order of the day. The private camping firms are taking big areas of viewing space for themselves and then the space is near empty as their patrons tour the rest of the circuit. Today a person posted an article about the Le Mans spirit, not one word was about the spirit of the spectating fans and how for some it’s more like a yearly pilgrimage, the spirit in the campsites is slowly changing. This year will be my 20th visit, we travel on the Monday before the race to soak up the atmosphere through the week and more and more the atmosphere is of discontent. The campsites open on the Monday but most of the toilets and showers aren’t open or connected, also what was wrong with having the French families camped next to each set of toilets and showers looking after them. The shower were always clean and fresh and if they had a problem it was fixed right away, I gladly gave them a Euro in the tip jar for maintaining the amenities. A popular question is why aren’t there permanent tiolet and shower buildings with showers big enough for an adult, space to put clothes without them getting soaked because the shower curtain is ripped. Plus there is also the fact the ACO continuously forgets about disabled campers/ spectators. In the campsites there aren’t ever any disabled showers if there are why are they sign posted, then on to disabled viewing areas. The viewing areas at Tetre Rouge need to be elevated as at the moment they are at ground level with able bodied spectators sitting on the railing around the areas. I was in a wheelchair for 3 years and use on when needed still, visiting the circuit in a chair is very near a waste of time, as you feel like your a forgotten second class citizen.

I have complained for years about the lack of any type of handrails on the steps up and down the embankment at the Porsche Curves on drivers right. The steps are very steep and very difficult to navigate with a bad hip. Heck even one side of the Dunlop Bridge doesnt have a handrail.

That last part is very disturbing. Hope something gets done about that and that the new improvements work well.