The #6 Toyota Gazoo Racing TS050 of Kamui Kobayashi, Mike Conway and Stéphane Sarrazin leads the 2016 24 Hours of Le Mans at the halfway stage, chased by the #2 Porsche 919 Hybrid of Romain Dumas, Neel Jani and Marc Lieb. 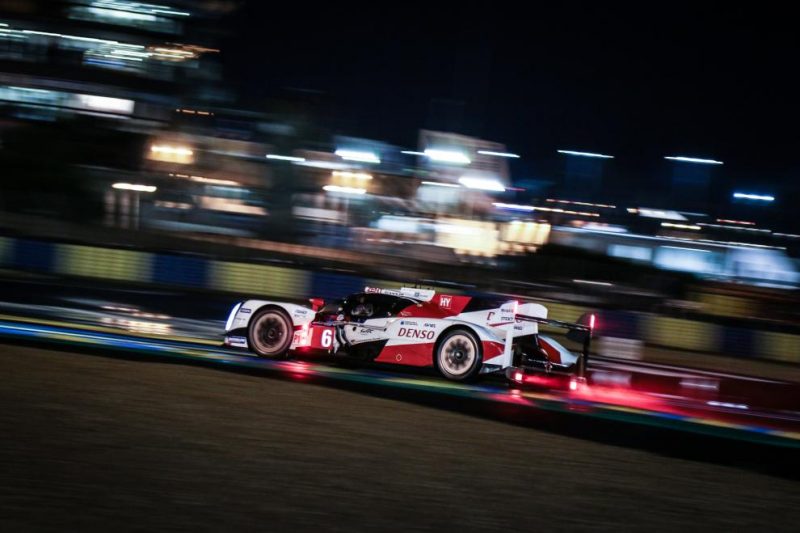 The most dramatic moment of the race so far came at around 11pm, when the best-placed Porsche #1 of Brendon Hartley, Mark Webber and Timo Bernhard pitted with a technical issue. With no quick fix evidently available, the stricken prototype spent a total of two and a half hours in the pits – ruling it out of contention for the race win.

Audi also suffered issues with its leading car, the #8 R18 of Lucas di Grassi, Loic Duval and Oliver Jarvis, which pitted for repair work shortly after the drama in the Porsche pit garage. The #6 Toyota Gazoo Racing car continues to hold its fuel consumption advantage over the Porsche and the Audi, although the cool nighttime conditions could see the Porsche stretch its stint lengths. Kobayashi holds a 45-second lead over Dumas at the halfway point.

In LMP2, drama also befell one of the pre-race favourites, with Tsugio Matsuda in the #47 KCMG Oreca 05 coming to a standstill on the run from Mulsanne Corner to Indianapolis as night turned to day. Matsuda had been running third and it was assumed that the car would retire, however the Japanese driver crawled back to the pits and, following a quick repair, rejoined the race some 57 laps down on the class leader.

The #36 Signatech Alpine A460 of Gustavo Menezes, Nicolas Lapierre and Stéphane Richelmi leads at the halfway stage on pit stop rotation, holding a 1 minute 24 second lead over the #26 G-Drive Racing machine and the #46 Thiriet by TDS Racing Oreca.

GTE Pro had been dominated by the Ford GTs, but the Risi Competizione Ferrari 488 of Giancarlo Fisichella, Toni Vilander and Matteo Mallucelli currently leads the class after an excellent run in the night-time conditions. Roughly 40 seconds further back is the #69 Ford GT of Ryan Briscoe, Richard Westbrook and Scott Dixon, with the #68 Ford GT rounding out the top three.

The #68 car of Joey Hand, Dirk Müller and Sébastian Bourdais had led the class in the early evening, but took the opportunity to complete a brake change during a safety car period during the night, losing track position to the #82 and the #69 in the process.

The #88 Abu Dhabi Proton Racing Porsche 911 RSR continues to lead the GTE Am class, as it has done practically since the green flag. Its closest challenger is now the #62 Scuderia Corsa, following a number of technical issues for the #78 KCMG Porsche 911. The pole-sitting #61 Clearwater Racing Ferrari F458 Italia of Weng Sun Mok, Keita Sawa and Rob Bell is in third position. A number of incidents involving GTE Am cars, including the #98 Aston Martin Racing and #83 AF Corse machines, brought out three separate safety car periods during the night. However, the #89 Proton Competition Porsche 911 RSR of Leh Keen and Marc Miller remains the sole retirement