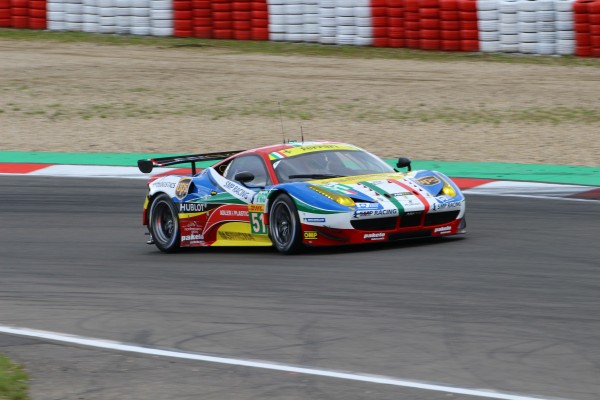 The 20-minute qualifying session began at the Nürburgring this afternoon in bright sunshine and pleasant temperatures. The GTE field were the first to take to the track, with each car required to set two lap times with two different drivers.

The #51 Ferrari 458 Italia of Gianmaria Bruni and Toni Vilander took pole in GTE, continuing their strong form from the morning practice session. An average lap time of 1:54.159 was enough for the #51 machine to pip team mates James Calado and Davide Rigon to pole position for tomorrow’s race. “It was a nice qualifying, very close, very tough,” said Gianmaria Bruni in the post-qualifying press conference. “We are very pleased to be on top.”

The Ferraris seemed to comfortably have the one-lap pace over the rest of the GTE field, with the Porsches and Aston Martins evidently taking more risks on the circuit. Fred Makowiecki in the #91 car was the first to put some wheels in the gravel at the chicane before the final corner, while Richard Lietz soon followed suit in the #91 machine. The Porsche Team Manthey entries ended the session 4th and 5th.

The #95 Aston Martin Racing car of Christoffer Nygaard and Marco Sorensen will start the race in third position, after Sorensen had initially led the field in the first half of the session. But it wasn’t a good day overall for the Aston Martin Racing team, with the #99 car of Fernando Rees, Richie Stanaway and Alex MacDowall having an off and wasting precious time in the pits as a result.

The Astons were well aware of their lack of one-lap pace, fully concentrating their efforts on the race tomorrow: “We know we have a big disadvantage on the Ferraris for the race,” said Fernando Rees after qualifying. “So qualifying was all about setting up for the race tommorrow.”

A Ferrari will also lead off the field in GTE Am, with the #72 SMP Racing 458 Italia driven by Victor Shaytar, Andrea Bertolini and Aleksey Basov leading the pack. The #98 Aston Martin of Dalla Lana/Lamy/Lauda will begin in second position after an eventful qualifying session. Pedro Lamy put in one of the quickest times of the session, before Paul Dalla Lana took over. The Canadian then found himself stopping on track for the second time in two sessions after an unknown mechanical problem brought the car to a standstill. The problem was thought to have been with the throttle, but with the car in parc fermé, the team will have to wait until tomorrow to find out the exact cause.