It’s all change in the FIA WEC calendar 2020/2021. Not only will the new Le Mans Hypercars make their competitive debuts, the calendar has been given a bit of a shake-up too. Some familiar faces return, but there are also some new destinations, as well as a new continent.

Following hefty criticism last season for the date of the official pre-season test, the WEC has moved its Prologue event forward to become a pre-season test. The test will take place at Silverstone on the weekend before the first race of the season at the British circuit.

The home of British motor racing will have the honour of hosting the first-ever competitive appearance for the brand-new Le Mans Hypercars on 5 September 2020. One significant change will that the race will be run on a Saturday afternoon and into the evening instead of the Sunday, which is reserved for the four-hour European Le Mans Series race.

Shanghai and Sao Paulo out, Monza and Kyalami in

It will come as no surprise to see Sao Paulo not returning to the WEC calendar 2020/2021 after the cancellation of the 2019/2020 race. What is more surprising is the removal of Shanghai, which has been an ever-present on the WEC calender since 2012.

In their place come two venues that will get any motorsport fan’s pulse racing. Monza is set to host the FIA WEC for the first time in its history, and will be the first time top-class prototypes have run there competitively since the 2008 Le Mans Series. Monza did, of course, also host the Prologue event in 2017.

Arguably the most significant addition to the 2020/2021 is Kyalami in South Africa. The track has been recently renovated and hosted its first major event for almost 20 years, the International GT Challenge, in late 2019. The 6 Hours of Kyalami in early February will see prototype sports cars return to South Africa for the first time since the 1984 World Sportscar Championship.

Six-hour races back to the norm

The 4-hour format introduced for 2019/2020 at Silverstone and Shanghai has been abandoned following discussions with the teams. Instead, races return to a minimum length of six hours. The 1000 Miles of Sebring and the 8 Hours of Bahrain retained their status as longer races, while the 24 Hours of Le Mans holds its place as the season finale and jewel in the crown.

The calendar remains provisional and is subject to FIA World Motorsport Council approval. 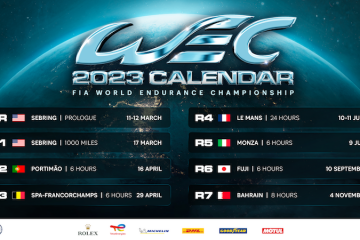 The 2022 season has just drawn to a conclusion with the final round in Bahrain. But already all eyes are on the WEC calendar in 2023, with brand-new Hypercars and the 100th anniversary of the Read more…