6 Hours of Circuit of the Americas: 3 hour report

Round five of the 2015 FIA World Endurance Championship saw the series head outside of Europe for the first time this year. With Porsche once again starting at the front of the field, They will be looking to make a championship charge this weekend. We take a look at the first three hours of the race. 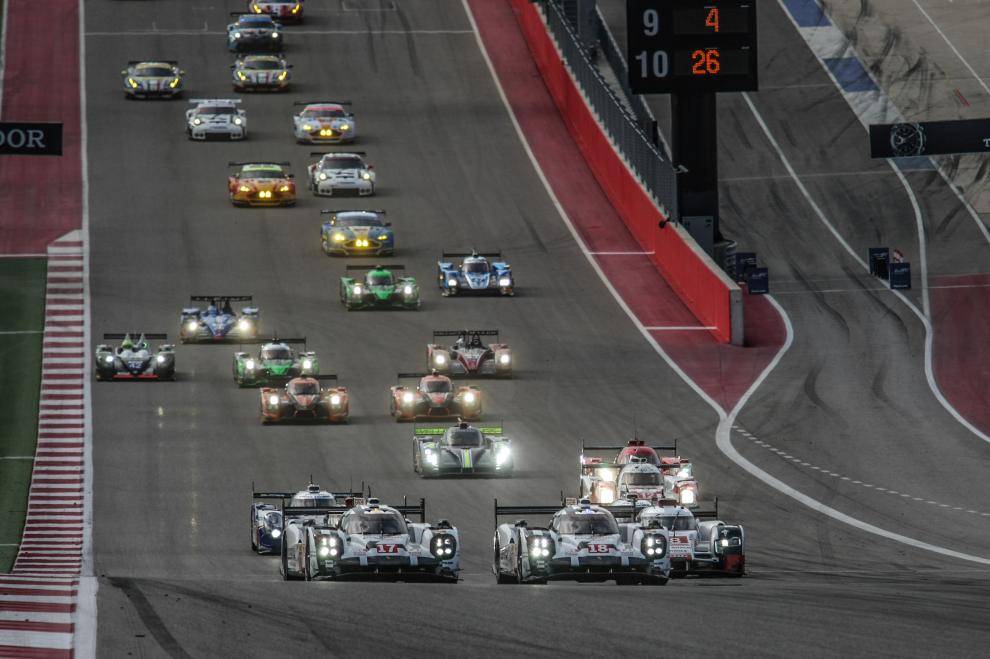 The race started with the pair of front row Porsches going side by side at turn one. Mark Webber aboard the #17 Porsche went around the outside from second on the grid to take the lead from Neel Jani in his #18 919 Hybrid. In the mean time, The #1 Toyota TS040 of Sebastian Buemi lept up to fourth position, nipping past Andre Lotterer, Although it only took the Audi a few laps to get back past.

In the privateer LMP1 category, the #13 Rebellion was troubled on lap one. A slow lap later led to ut to be the first car in the pit road and the garage 37 minutes into the race. 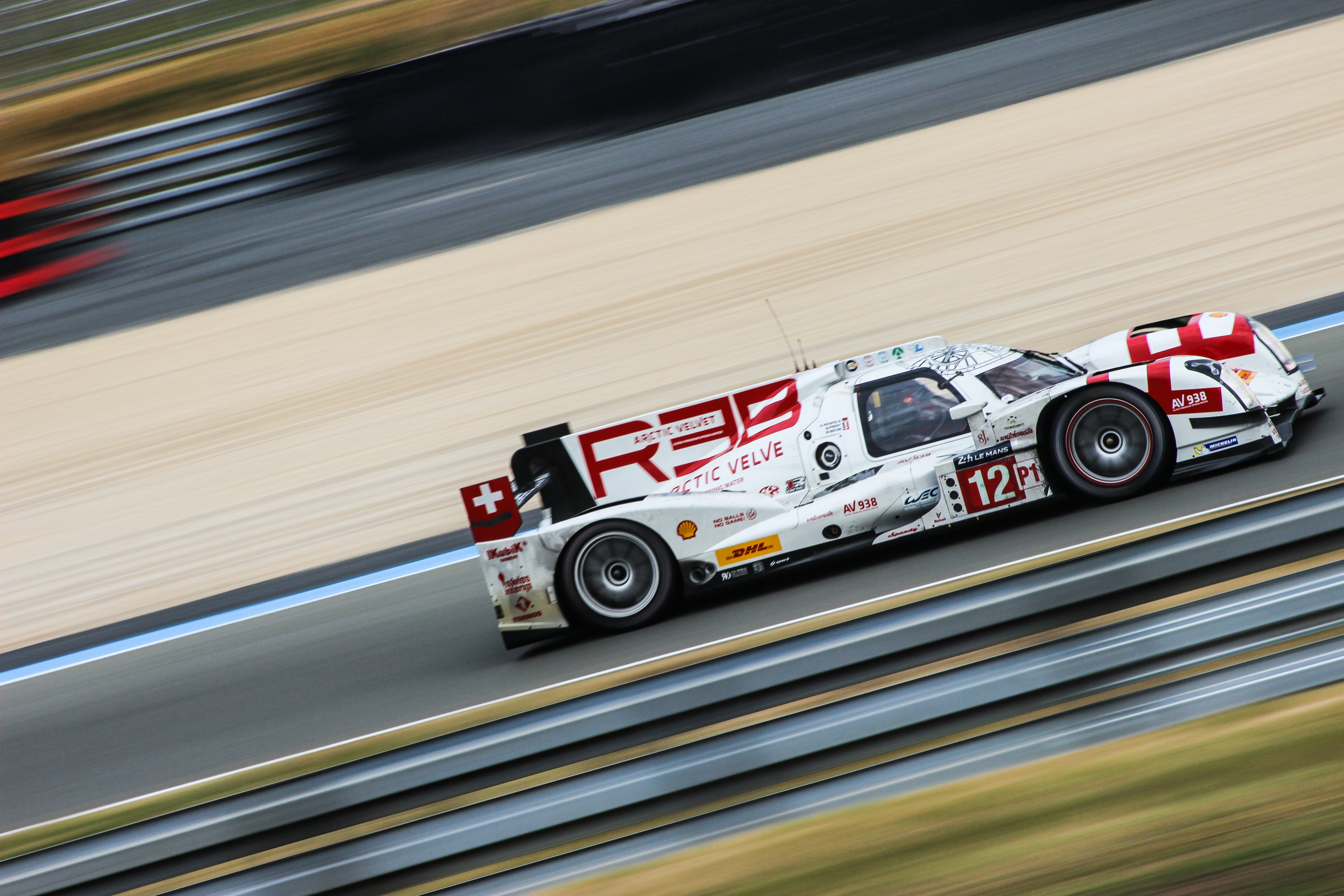 Darren Turner set the early pace in the #97 Aston Martin for the GTE-PRO class. Fred Makowiecki also managed to get past the pole sitter, Rees. Although the Aston Martin pace didn’t hold off the pair of Porsches that hit the head of the class, #92 ahead of #91 just 5 minutes into the race.

The Toyota of Buemi couldn’t hold onto the pace of Lotterer and lost he position a few minutes later into turn 12. Although Buemi put up a fight, the speed of the Audi was to much for the Frenchman to overcome in his Toyota.

Patrick Long in the #77 Dempsey car up to 23rd overall emongst the leading pro’s early on. Over in GTE-AM, Patrick Long once again had an outstanding start to the race. The home racer hit the front of the GTE-PRO field very early on as he gaped the AM field, leaving the others to fight it out in a fantastic battle a few seconds down the road.

In LMP2, Sam Bird led the ESM of Ryan Dalziel ahead of Yacaman. Lapierre in fourth after 20 minutes, even after starting from the back of the LMP2 field in his KCMG. 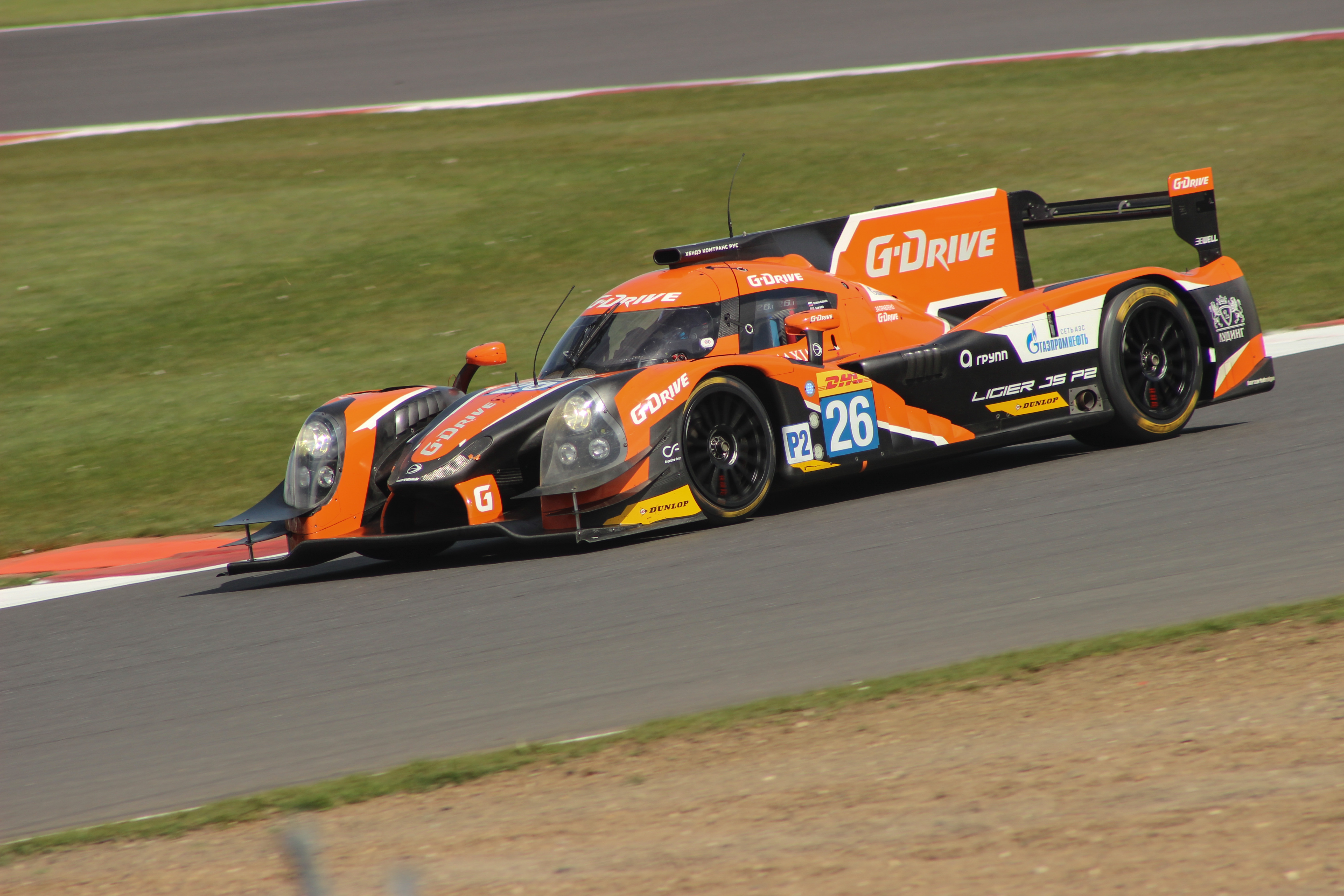 At he 45 minute mark the Prototype field began to filter into the pit lane. The #40 ESM did not take a new set of Dunlops, allowing them to jump the G-Drive car of Sam Bird into the lead of the class. Audi in the pit before Porsche with Both cars. Treluyer and Jarvis took over the #7 and #8 Audi’s respectively at the stops. Benoit Treluyer claiming the fastest 3rd sector time of the race on his out lap.

5 Minutes later, Neel Jani brought the ‘#19 Porsche 919 in from second position and handed it over to Marc Lieb. One lap later it was Webber’s turn to hand over to Brendon Hartley at the lead of the race. They completed their stop without losing the lead The Toyota pair then came in line astern a lap later than the second Porsche. Davidson and Sarrazin climbing aboard the #1 and #2 cars respectively.

As the stops came to an end just inside the second hour, Porsche #17 of Hartley led LMP1 ahead of his Porsche team mate, Marc Lieb by 14 and a half seconds. A further 5 seconds back was Oliver Jarvis in his #8 Audi R-18 e-tron quattro. In the privateer category it was the Rebellion of Nicolas Prost ahead of the sole ByKolles car, driven by Simon Trummer.

LMP2 saw a lead change just 6 minutes into the second hour when a close battle between the leading local favorite, the #30 Extreme Speed Motorsports Ligier, Julien Canal in the G-Drive car and Richard Bradley in the KCMG Oreca 05 resulted in the later of the trio taking the lead of the class. Oliver Webb split was next up in class holding fourth position for SARD-Morand, but closing all the time on the leading trio. Fifth was Gustavo Yacaman in the second of the G-Drive cars.

GTE-PRO, much as LMP1 saw a Porsche 1-2. Michael Christensen led ahead of Patrick Pilet in the #91 and #92 Porsche 911’s respectively. Toni Vilander held the final provisional podium spot in his Ferrari 458 Italia 9 seconds ahead of his AF Corse team mate James Calado.

Home favorite Patrick Dempsey led the GTE-AM pack just ahead of the championship leading SMP Racing Ferrari 458 Italia. Francesco Castellacci was in third position in class in his #96 Aston Martin. 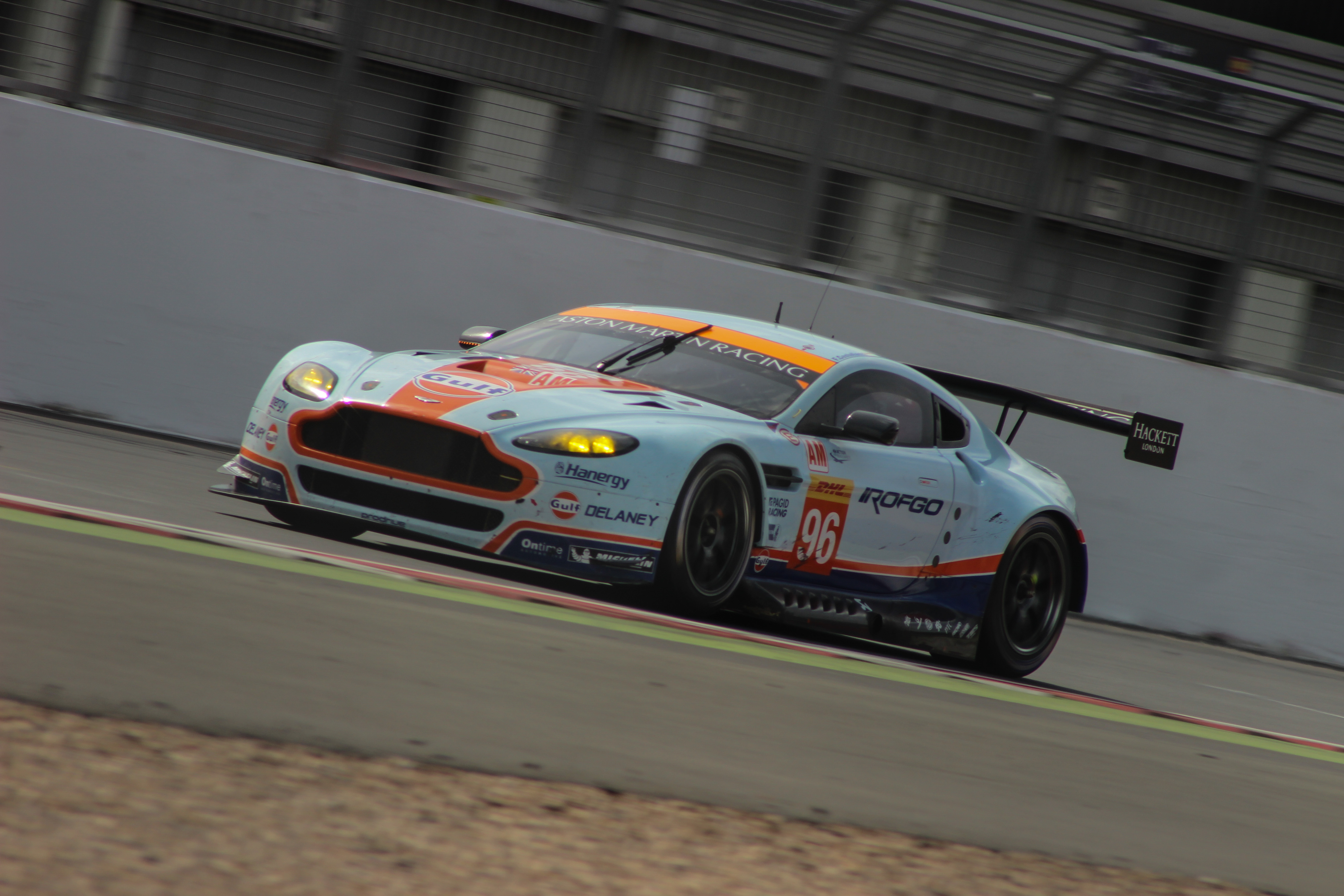 The second hour started slowly for the #30 ESM car. After Ryan DALZIEL took the lead of the class at the first round of pit stops coutousy of not changing tires, the ESM Ligier began to loose all grip and drop down the order. This led to a stop just 25 minutes into the hour where this time, the American team took tires. This handed provisional third to the SARD-Morand of Oliver Webb.

After Patrick Long’s fantastic early stint, Patrick Dempsey took over the #77 Porsche in GTE-AM. He was just 1 second ahead of the SMP Ferrari of Basov in the class but the TV star managed to pull out the gap to 3 seconds. However it wasn’t to last as the #77 car dropped to second place as Basov made his move an hour and a half into the race with a very close move on the American into turn 12.

Meanwhile in LMP1, Marc Lieb began to hold the gap at 20 seconds between himself and the leading car of Brendon Hartley ahead. A further 12 seconds back was the nearest Audi of Oliver Jarvis. 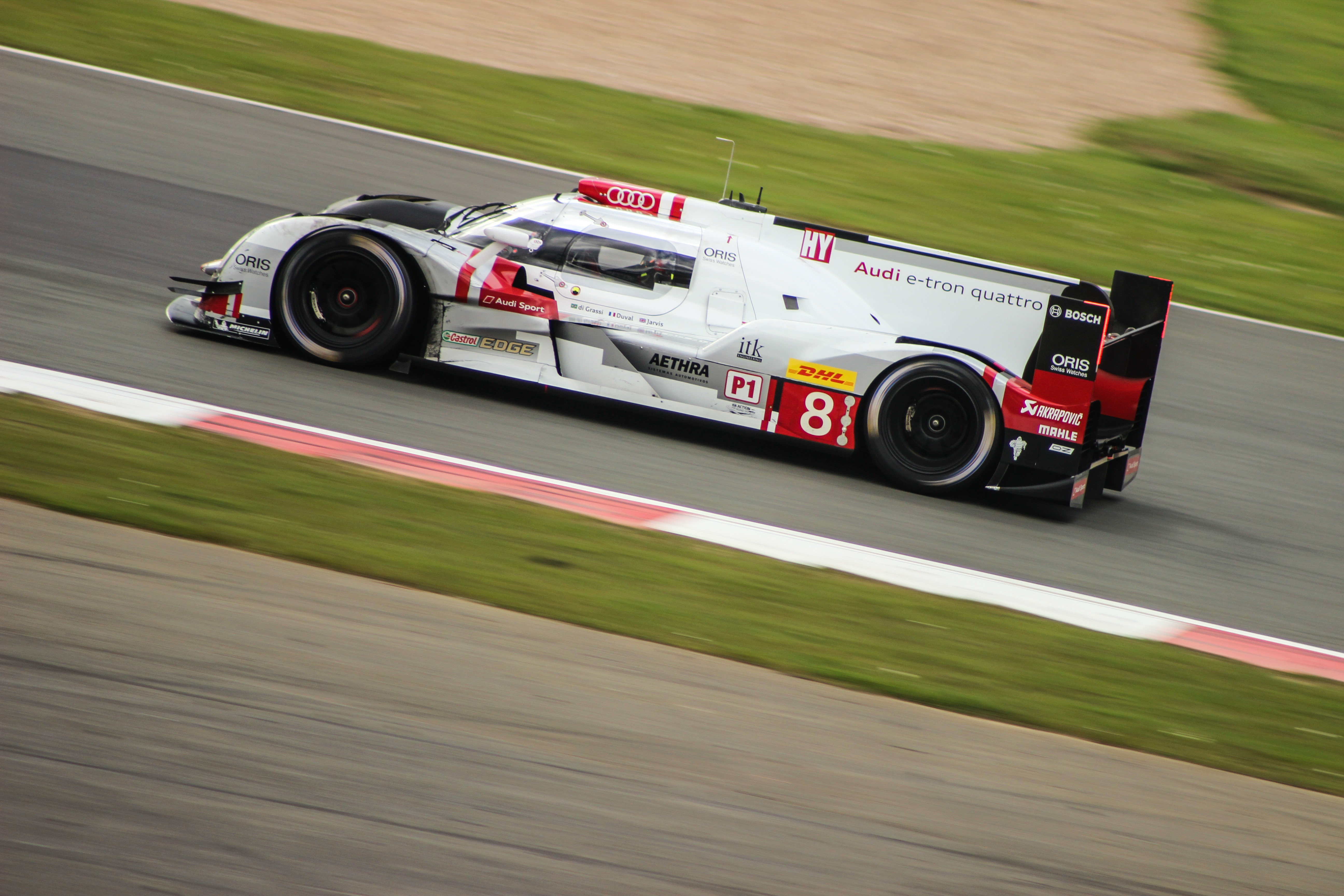 With 15 minutes left in the second hour, the second round of stops took place. Once again, Audi were the first to stop, with routine full service stops for both cars. Oliver Jarvis set the fastest lap for the #8 car just after the stop, while Treluyer set yet another fastest final sector on his out lap.

Porsche then came in with both cars. Marc Lieb handed the #18 Porsche over to Romain Dumas in the stop. While Hartley handed the lead #17 car over to Mark Webber, meaning that with 4 hours to go we are still yet to see Timo Bernhard drive the car.

Drama hit Toyota when Antony Davidson locked up entering the pit lane and was forced to abort and run another lap before the stop. However with the car about to stop, the Brit was low on fuel and forced to limp home. A slow lap later, they did manage to bring the car back where a full service and Kazuki Nakajima awaited the #1 Toyota. 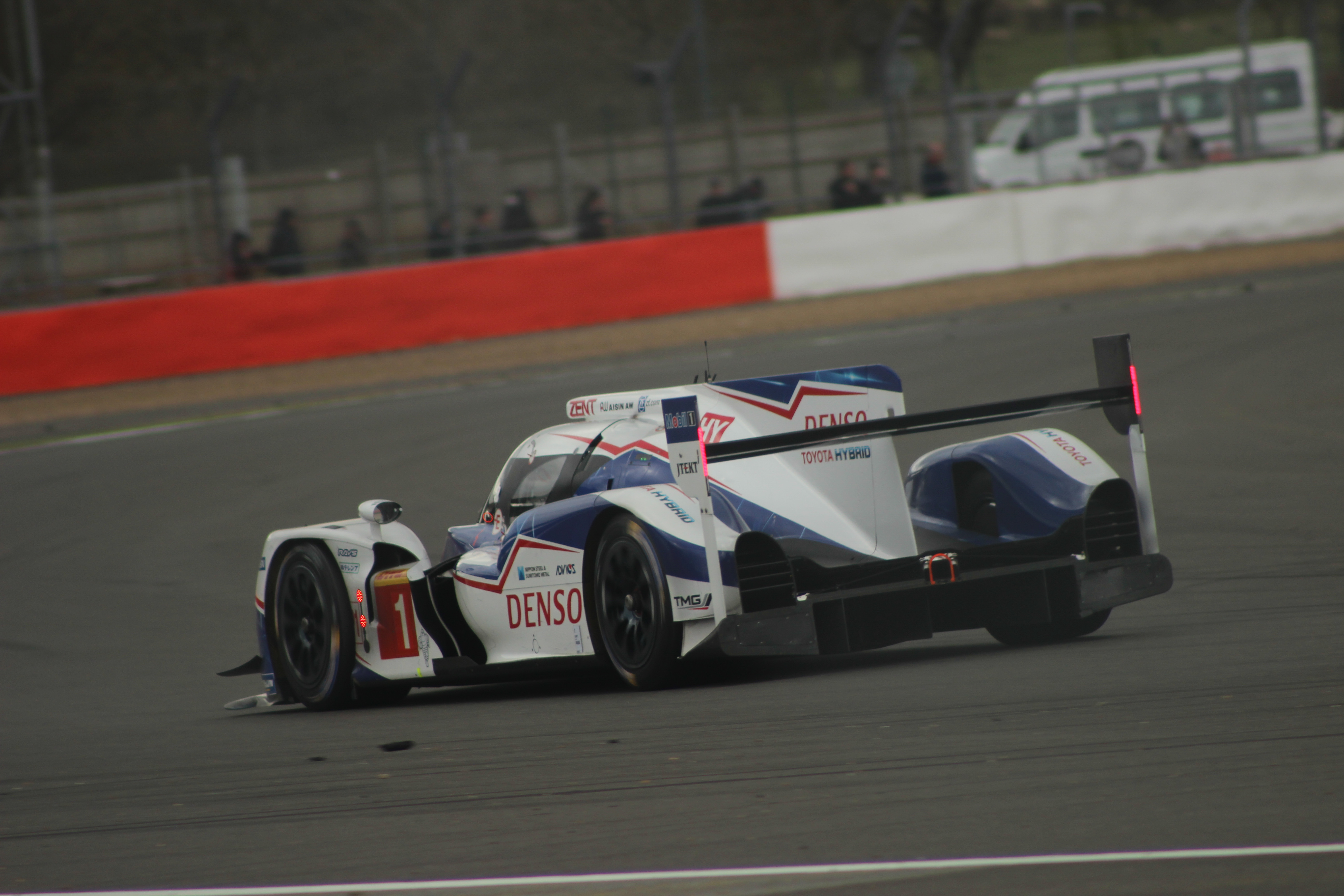 It wasn’t only action in LMP1. LMP2 saw Ed Brown take a very high speed exit from the track at the penultimate turn 20. Potentially blinded by the setting sun, the All American ESM car turned in to early, to fast to the corner and took off over the sausage kerb on the inside of the corner, before crashing into the wall on the outside.

A case of three in to one doesn’t go sent Mike Conway for a spin in his #2 Toyota. Going into turn 10 Benny Simonsen and Earl Bamber were battling away in GTE-AM, however a tight squeeze at the Apex saw contact between the front of the Porsche 911 and the rear of the Toyota TS040 sent the later spinning. However masterful car control from Conway kept the car out of the Barrier and pointing in the right direction.

As dusk began to fall over Austin Texas, and in turn the Circuit of the Americas the order looked like this, and it was once again looking like a good day for Porsche.

Porsche remained first and second at the top of the time sheets in LMP1. #17 of Webber led at the half way stage ahead of Dumas in the #18 sister car by 20 seconds with 92 laps completed. Loic Duval was aboard the #8 Audi, which continued to lap in third position ahead of Marcel Fassler in 4th.

The Toyota #2 of Conway was the leading Toyota in 5th with the defending world champions 6th, however with just a minute to go until half distance, Conway lost it on the kerb  of turn 11 while behind an Aston Martin. A tank-slapper insued for the British driver before he found himself head on in the wall on the left. The car then had no lights, and ground to a halt.

In the LMP1 privateer catagory the #12 Rebellion continued to lead, now by three seconds ahead of the second placed ByKolles car. The #13 Rebellion made it back out on track, but is now 9 laps off of the pace of the sister car.

LMP2 saw the #26 G-Drive Ligier of Roman Rusinov lead at the half way stage by just under a minute to the #47 KCMG, which started last in class. Nelson Panciatici is aboard the Alpine which lays third place in class ahead of the home favorites, the sole remaining #30 Extreme Speed Motorsport Ligier.

GTE-PRO at the half way stage now sees the #92 of Patrick Pilet lead the class ahead of the #91 Porsche of Michael Christensen by six and a half seconds. A further 12 seconds back from Christensen, Toni Vilander in the #51 Ferrari holds onto third in class. 4th is that of the #71 AF Corse Ferrari ahead of the trio of Aston Martins in the order of #97, #95 and #99 respectively. 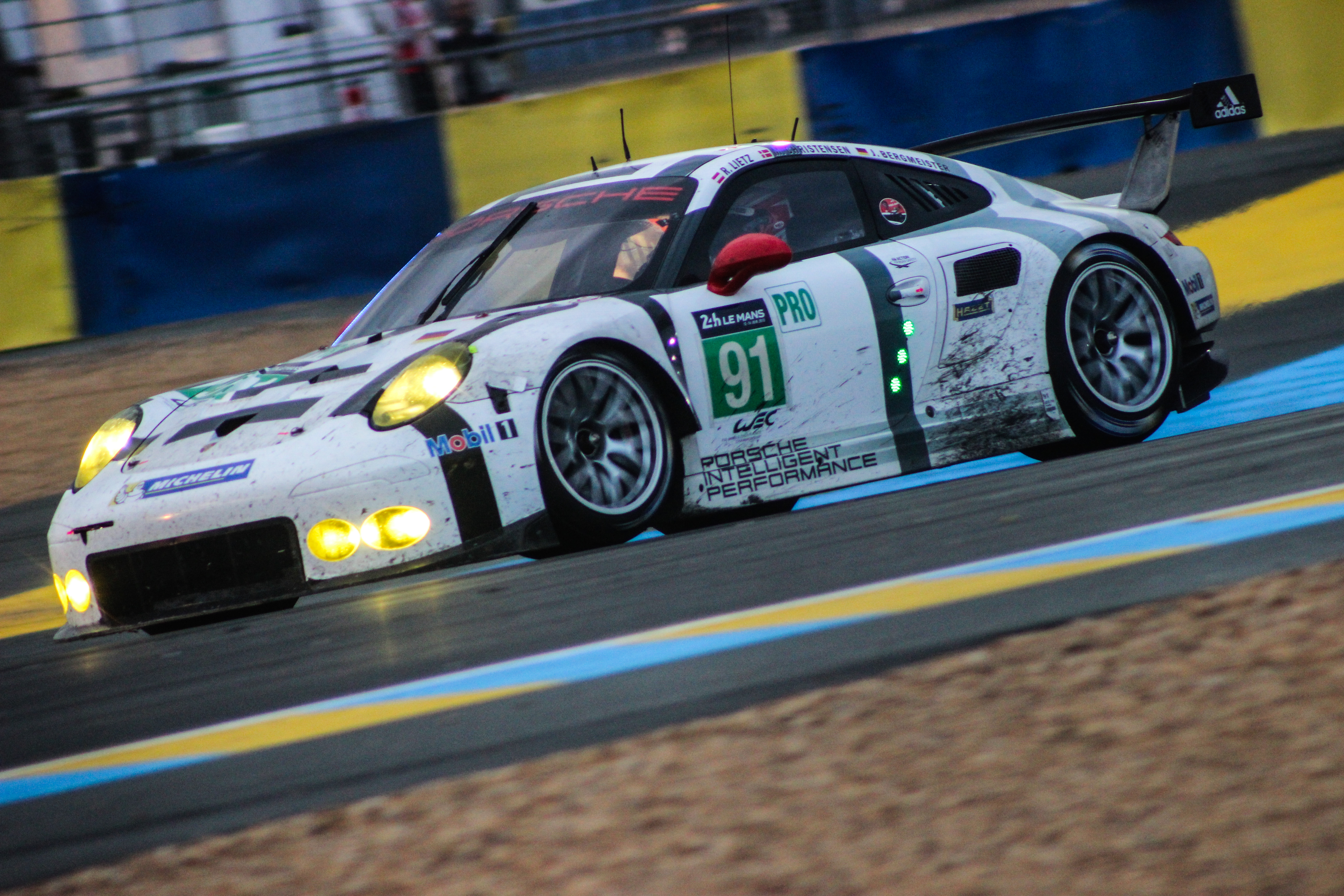 GTE-AM has the #77 Dempsey-Proton Porsche lead, meaning Porsche are first and second in all 3 of the classes they are represented in. Two seconds back is the Abu Dhabi-Proton sister car. AF Corse are again third in class with the #83 car, currently being driven by Emmanuel Collard.

With the full course yellow out for Conway’s accident, the final half proper is eagerly awaited.