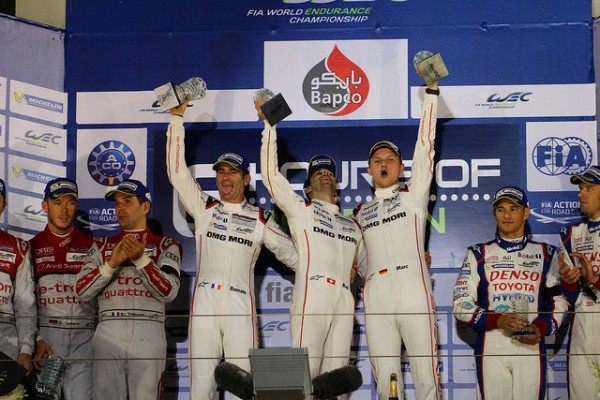 The 2015 FIA World Endurance Championship was one of the most exciting since the series’ inception in 2012. Victory for the “Rookie Porsche” at Le Mans, or Audi and Porsche’s final-round showdown for the World Drivers’ Championship, will certainly live long in the memory. At WEC-Magazin, we have taken a look at the season as a whole and picked out some of the stand-out performances.

All four of our regular contributors have made their nominations in each of the following categories: Driver of the Year, Rookie of the Year, Team of the Year, Most Improved Team and Race of the Season. The nominations are in, but it’s up to you, our readers, to decide who wins each category. Scroll down to cast your vote!

Driver of the Year

David: Patrick Long – It’s difficult to look past the championship-winning teams, but in my opinion driver of the season has to go to Patrick Long. The Porsche expert was not only the quickest driver in the field more often than not, he also played a valuable role to the development of silver driver Patrick Dempsey. He led the team peerlessly in its maiden WEC season and topped off a fantastic year with a magnificent victory at the 6 Hours of Fuji.

Dominic: Richie Stanaway – He showed a strong performances in every race he took part. The Aston Martin Vantage GTE had big trouble with the new Balance of Perfomance but Richie keept fighting on a high level.

James: Nick Tandy – His convincing season in the KCMG and Le Mans winning performance is nothing short of incredible.

Tobias: Richard Lietz – For his solo victory in the GTE drivers’ championship. He had a hard season with changing co-drivers in his car but always keept fighting against the strong Ferrari and brought home his and Porsche’s first ever title in WEC GTE-Pro

Team of the Year

David: Porsche – This has been a season of domination for the German marque and they have been rewarded with a thoroughly deserved championship victory. The entire team, from drivers to mechanics to engineers, barely put a foot wrong all season.

Dominic: SMP Racing – For their fantastic work this Season and the stunning fights against the Aston Martin #98.

James: Audi – After just scaping Le Mans last year, they way they bounced back to have at least one car on the podium every race this year was great to see

Tobias: G-Drive Racing – After the bad end in 2014 they come back even stronger and finally made it. No problem could stop the team this season. They handled every situation well and finally won their long-desired title.

Rookie of the Year

David: Nick Tandy – He genuinely made the step up to becoming a world-class prototype driver with a stunning victory at Le Mans for Porsche and some awesome drives behind the wheel of the #47 KCMG LMP2 machine.

Dominic: Pipo Derani – He had a massive first season in LMP2-class. With six podium finishes and one pole he really deserves the title “Rookie of the Year”.

James: Jonathan Adam – A great second half to season alongside fellow BTCC refugee Darren Turner at Aston Martin was fantastic to see. Although it got off to a slow start, once Aston were put on equal terms on BoP, he was instantly rewarded with his first podium on the world stage.

Tobias: Nicolai Sylvest – The Larbre team struggled with their performance in the first half of the season. When Nicolai became part of the driving team, they got better with every race. The young Dane has huge talent and showed the he is able to push and fight for the podium.

David: Signatech Alpine – The French team made the step up from the ELMS and enjoyed a successful debut WEC season, culminating in victory at the 6 Hours of Shanghai.

Dominic: ByKolles – After their learning curve and stunning improvement after the 24 Hours of Le Mans with two wins and three second place finishes.

James: Rebellion – Not so much from last season to this season, but with the new AER engine, the rate that they have got a handle on their new set up is great to see.

Tobias: Dempsey-Proton Racing – They came from the USCC and pushed in every single race. They also made a step forward in every race and by the end of the season they reached the podium. The team showed that they want the victory and were able to achieve their aims through hard work.

Race of the Season

David: 6h Fuji – For me the 6 Hours of Fuji was a stand-out race in this season’s World Endurance Championship, with action up and down the field and one of the key moments in the LMP2 battle with just minutes of the race left.

Dominic: 6h Silverstone – For me the 6 Hours of Silverstone was the best race of the season. The teams has shown fantastic fights in LMP1 and GTE Pro for nearly the full distance. This was a race that will stick in my mind.

James: 24h Le Mans – It was my first time at the 24 Hours and it lived up to expectations with a classic race. The battle between the trio of Porsches and Audis into the evening were extraordinary.

Tobias: 6h Nürburgring – For me it was the 6 Hours of Nürburgring. It was the first time the WEC held a race in Germany. It wasn’t just a stunning race, which was full of memorable moments, it was also the race with the biggest crowd and the first one in Germany.

Hope they do not constrain LMP1 too much. Remember 1971 and the killing of the faster than F1 5 liter monsters (917 et al). This year was fabulous. Do not make them slower!!! Let them compete with F1 for lap times.

Patrick Long was amazing this year

Was a fabulous year!!

Richi Lietz is the best of the rest