Victory for Porsche at the Nurburgring

The first three hours of the 6 Hours of the Nürburgring delivered what we have come to expect of the FIA WEC. But it was victory on home soil for Porsche in the end after a close though battle with Audi at the front of the field. We take a look at the second half of the race. 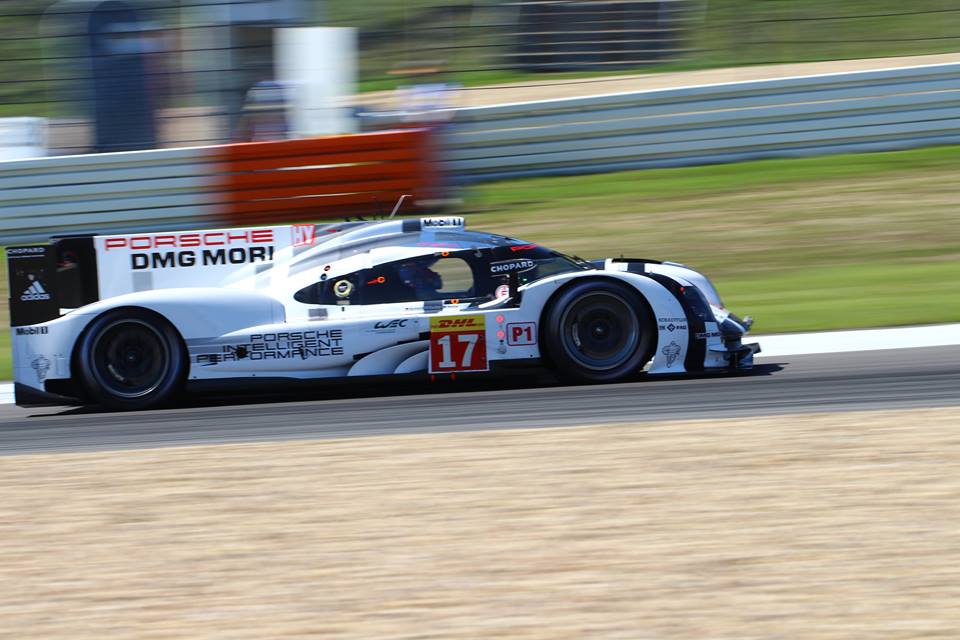 The fourth hour began with yet more bad news at AF Corse. After the mechanical issues of the #51 car earlier, the #71 was having a strong race in second position in GTE-PRO. However, as a consequence of earlier contact with Makowiecki, the #71 car with Davide Rigon picked up a puncture and dropped down to third in class.

There was an unusual reason for a pit stop in GTE-AM when there was a door change for the #77 in GTE-AM. The window on drivers right of the car failed and forced the team to pit for a new door. 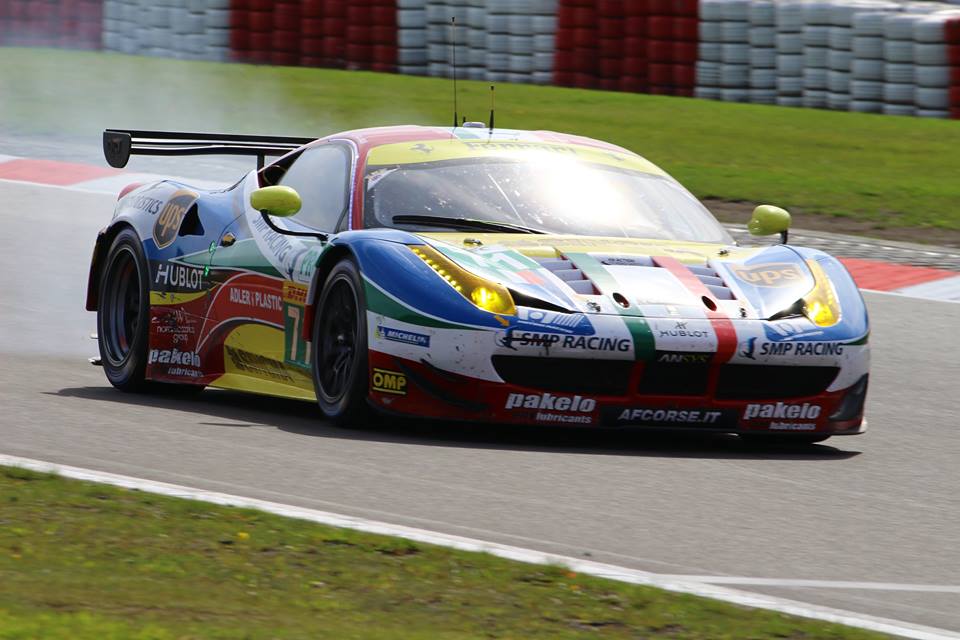 While all of this GTE controversy was carrying on, the #18 Porsche contninued on and managed to get back to around 1 lap off of the race lead. The #7 Audi of Treluyer was still second to Webber in the #17 and the #8 car of Oliver Jarvis in third. LMP2 continued to see the KCMG lead ahead of a pair of battling G-Drive cars by just over a lap.

The penultimate hour of the race began poorly for the Strakka team. Firstly contact with the #97 Aston Martin of Stefan Mucke at the Dunlop curve saw its right rear legality panel break free. Then, a 30 second stop go penalty was issued to the team for speeding in the pit lane.

Porsche’s luck began to pick up as Mark Webber put a lap on the second place car of Beniot Treluyer. In the meantime, the gap between the pair of Audi’s reduced to just 18 seconds. 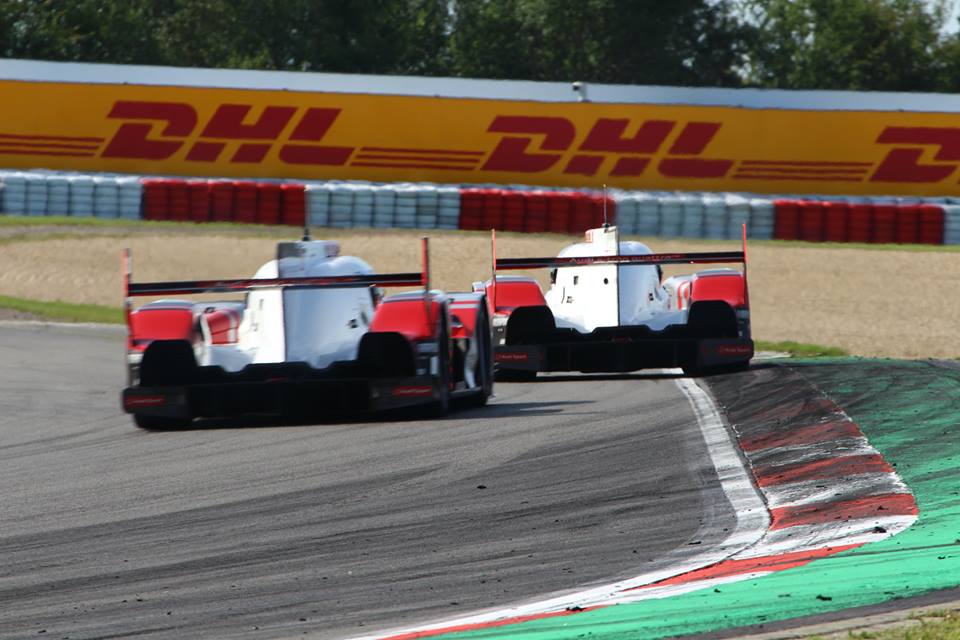 Once again, there was a full course yellow out for gravel on the track at the final chicane which cued a flurry of activity in the pit lane, including from the leading #17 car. Mark Webber jumped out of the Porsche 919 and handed over the controls to Brendon Harltey.

After all the stops under full course yellow, Jani managed to get past the #8 Audi back up into third position after a brilliant recovery drive. Jani however didn’t stop there as he was under 10 seconds off of the second place #7 Audi immediately.

In GTE-AM, Aston Martin let go of the lead, and passed it back to the pole sitting SMP Racing Ferrari. Andrea Bertollini nipped past the #98 Aston Martin with Paul Dalla Lana behind the wheel.

10 minutes shy of the final hour the battle for third began to hot up. Jani began to hustle the #7 Audi of Treluyer while Di Grassi in the #8 Audi was closing on the pair of them by a second a lap.

Right at the death of the fifth hour Jani dove down the inside of Trelyer into the first corner but went to deep. Treluyer cut back but was then forced around the outside of turn two, and amazingly made it stick before swooping round the outside of turn 3 as well before gaining the inside for the next corner and holding the position. This left the #8 of Di Grassi the chance to overtake Jani into the Dunlop curve and took it, making it an Audi 2-3 once again thanks to the masterful defending of Benoit Treluyer.

With Hartley out in front by a lap ahead of the #7 and #8 Audis respectively, The battle was again white hot. Di Grassi made it past Treluyer and into second position where he broke away, but the Frenchman held off the #18 Porsche of Jani behind until it took a late dive into the pits with 51 minutes to go, where Andre Lotterer took over the controls of the #7 Audi R-18 e-tron quattro.

After the stops, Neel Jani found his way past the two Audi’s with a faster stop making it once again a Porsche 1-2. With half an hour left on the clock, Audi swapped the positions for third place with the #8 car going though passing the #7 championship leading car. 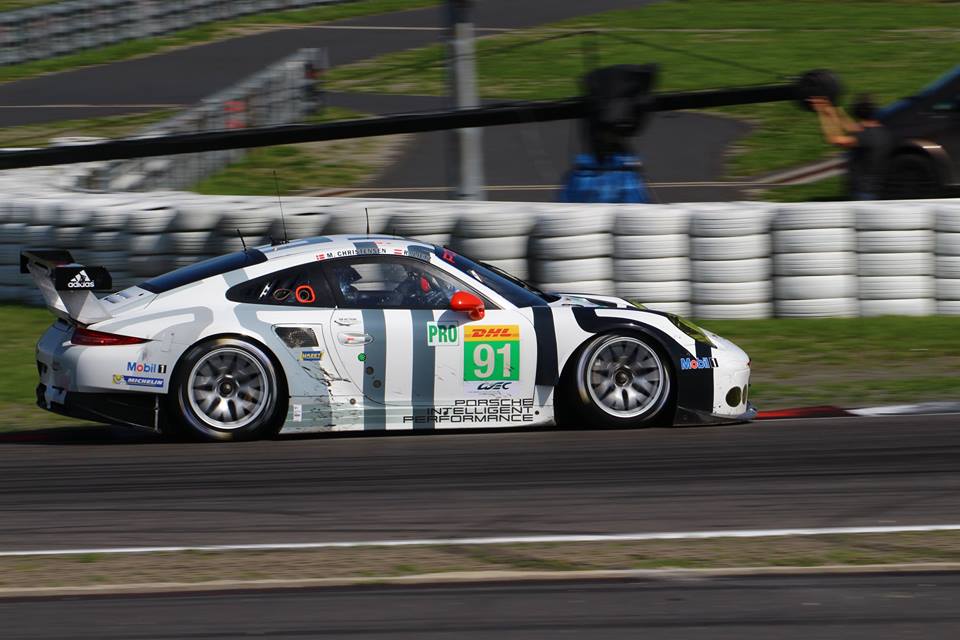 A late call with under half an hour to go saw the stewards give the second place #92 Porsche 911 in GTE-PRO a drive though penalty for its earlier incident with the #71 AF Corse Ferrari 458 Italia. However, despite the penalty the #92 car held on to second in class ahead of the #71 car.

With just 17 minutes to go, Lucas Di Grassi began to close on the #18 Porsche once again, however it wasn’t enough to re take to position. This meant that it was a 1-2 like in 2009, but this time for Porsche. And the first win for Mark Webber in the WEC at the same circuit he took his first F1 race win at in 2009. That also means it is the first win for the Webber, Harley, Bernhard trio in the series, as well as Porsche’s first 1-2 with the 919 Hybrid. Best of the rest would have gone to Audi with the #8 car taking it’s first podium of the year for Jarvis, Di Grassi and Duval. However a late change to benefit Audi’s championship standings saw the #7 car take the final podium spot.

For the first time the ByKolles team made it to the finish and took the race win with Simon Trummer and Pierre Kaffer ahead of the sole finishing Rebellion R-One of Beche, Hiedfeld and Prost

In LMP2 the KCMG had Nick Tandy back behind the wheel and a lap ahead of his nearest LMP2 competitor, fellow Brit, Sam bird. That is how it finished, therefore meaning that KCMG win again after Le Mans. Sam Bird in the #26 G-Drive led home the #28 G-Drive car making it a G-Drive 2-3. After the drama earlier in the week, Sard Morand took a fantastic fourth place in the LMP2 class.

GTE-PRO made it a double Porsche 1-2 with the #91 car of Michael Christensen and Richard Lietz ahead of the #92 of Patrick Pilet and Frederik Makowiecki. James Calado and Davide Rigon took their #71 AF Corse Ferrari up to third position after a tricky race for the team.

In GTE-AM SMP Racing repeated their Le Mans win by taking top spot. Aston Martin managed second in GTE-AM with their #98 car ahead of the final podium position car, the #83 AF Corse Ferrari.

A pair of 1-2’s for Porsche made it a perfect home race for the German team in front of 62000 fans across the weekend at the Nurburgring. A fantastic recovery drive from Jani, Lieb and Dumas was the star story of the race in LMP1, as with three minutes worth of penalties, they still battled back to second ahead of Audi. Yet another podium position for Lotterer, Treluyer and Fassler however keeps the championship fight well and truly alive. We look foward to seeing you next time from the Circuit of the Americas next month