The #8 Toyota TS050 of Sébastien Buemi, Kazuki Nakajima and Anthony Davidson took victory at the final race of the 2017 FIA World Endurance Championship, the Six Hours of Bahrain, finishing over a lap ahead of the champions-elect Brendon Hartley, Earl Bamber and Timo Bernhard in the #2 Porsche 919 Hybrid. 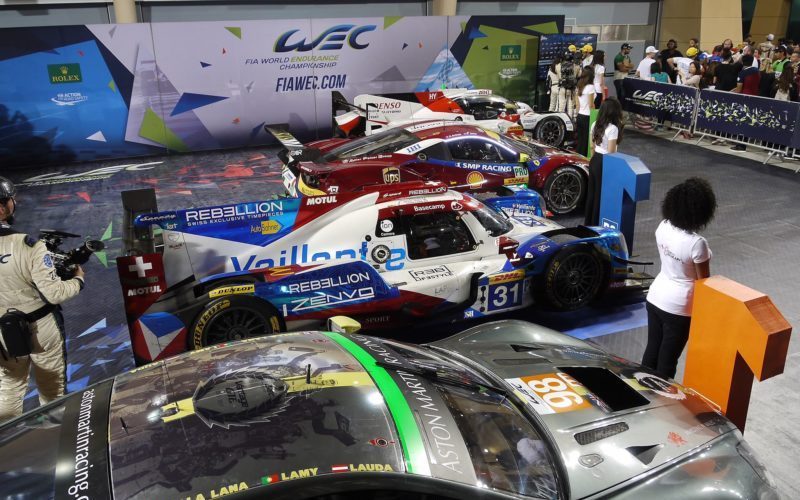 The Porsches got the jump on the pair of the Toyotas as the six-hour race began, but Sébastien Buemi in the #8 car caught and passed the lead Porsche and built up a 20-second lead by the end of the second hour with the sister #7 machine in second.

Contact between the #7 car driven by Kamui Kobayashi and the #92 Porsche 911 RSR of Michael Christensen – which saw the #7 car handed a stop/go penalty – put the #7 car out of contention and left Buemi, Nakajima and Davidson to pick up their fifth victory of the season and the sixteenth for Toyota since WEC began in 2012.

“It was a great race,” said Anthony Davidson. “All three drivers, plus the engineers and pit crew, deserve credit for this. Everyone did a perfect job this weekend; we hit the ground running and got the tyre choice just right, so a big thanks to the team.”

Porsche failed to secure victory in their final appearance in LMP1, with the Toyotas appearing to just have the edge on long-stint pace around the 5.4km Bahrain International Circuit. “The start was good and at the beginning we could more or less match the pace of the Toyotas,” said Neel Jani, “but as soon as we were in traffic, they just had this little bit more than us and over the distance we had to let them go.”

Porsche drivers Brendon Hartley, Earl Bamber and Timo Bernhard had already taken the drivers’ title at the previous race in Shanghai, but their third-place finish meant they only failed to finish on the podium on one occasion in 2017 (Fuji). The Porsche 919 Hybrid era has now come to an end after 17 race wins, three Le Mans victories and three World Manufacturers’ Championships. 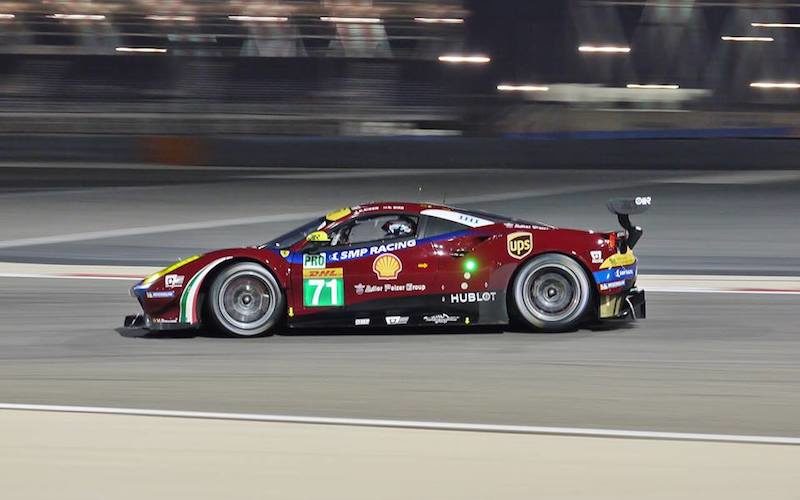 GTE Pro provided the nose-to-tail battles we are accustomed to, but with the added spice of a world championship title being on the line. The contenders were the #51 AF Corse Ferrari 488 of James Calado and Alessandro Pier Guidi, the #67 Ford GT of Andy Priaulx and Harry Tincknell and the #91 Porsche 911 RSR of Richard Lietz and Frédéric Makowiecki. The #71 AF Corse Ferrari of Davide Rigon and Sam Bird led off the line, but the #67 Ford of Andy Priaulx and then Harry Tincknell was in hot pursuit and actually passed the Ferrari for the lead just before the two-hour mark – a result that would have handed the Ford drivers the world title.

However, as the race progressed, the ultimate pace of the pair of Ferraris began to tell, and by the halfway stage the #51 car held the race lead ahead of the chasing Ford. Despite the Ford battling hard, the Ferraris were able to extend their lead, with Calado and Pier Guidi finishing second behind Rigon and Bird to secure the inaugural FIA World GT Drivers’ Championship.

“It looked like we could be in with a chance at the beginning but we just didn’t have an answer for the Ferraris today,” Priaulx said. “We had good tyre degradation but we just didn’t have enough speed. Having said that I’ve had a great race. I really enjoyed my three stints and managed to make some good passes. We’ve had a brilliant season: two wins, second at Le Mans and fought to the very end of the championship.”

The pair of GT Porsches appeared to struggle in the Bahraini heat, with the teams’ fortunes compounded by the #92 car’s retirement after contact with a Toyota LMP1 car. The #91 of Lietz and Makowiecki finished fourth to secure second place in the drivers’ title. 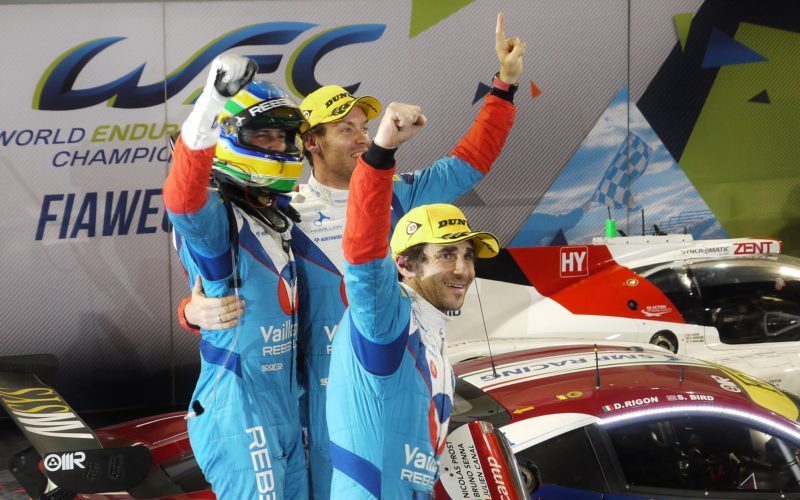 Another title battle that went to the wire was in LMP2. Another topsy-turvy race ended with victory for the #31 Vaillante Rebellion crew of Bruno Senna, Julien Canal and Nicolas Prost – handing Senna and Canal the drivers’ title in the process. Senna and Canal had led the drivers’ title by four points going in to the final round, knowing that they would have to better the result of the chasing #38 Jackie Chan DC Racing car of Oliver Jarvis, Thomas Laurent and Ho-Pin Tung to be in with any chance of taking the championship.

The #25 CEFC Manor TRS Racing Oreca took a surprise early lead in the race after a strong first stint by former F1 driver Vitaly Petrov, but the #31 and #13 Vaillante Rebellions and #38 Jackie Chan DC Racing Orecas were never too far behind and made their class tell as the race progressed. The LMP2 battle was on a knife-edge going into the final few hours, with the #31 car holding a 45-second advantage over the chasing #38 but suffering from a complete loss of power steering.

With the car evidently extremely difficult to drive, Bruno Senna was losing time hand over fist to the hard-charging Oliver Jarvis. In the end, the Brazilian crossed the line just 10 seconds ahead of the Brit to take the title.

Victory and title honours in GTE Am went to the #98 Aston Martin Racing crew of Paul Dalla Lana, Mathias Lauda and Pedro Lamy after four years of trying. “To describe the feeling of winning this championship in one word… finally!” said Dalla Lana. “I’ve seen Nicki and Marco enjoy this moment last year and Darren, Jonny and Daniel at Le Mans this year, so I can appreciate what they went through because this really is complete and total satisfaction.”

Dalla Lana, Lamy and Lauda took the race victory by just two seconds ahead of the #61 Clearwater Racing Ferrari of Griffin/Mok/Sawa, giving the Aston Martin Vantage V8 the send-off it deserved in its final WEC appearance.