It was one of the most heartbreaking finishes to any race, let alone the 24 Hours of Le Mans, in history. The #5 Toyota Gazoo Racing TS050 of Kazuki Nakajima, Anthony Davidson and Sébastian Buemi ground to a halt just one lap from glory. Despite the bitter disappointment at what would have been a maiden win for both team and all three drivers, Toyota Gazoo Racing are looking ahead.

Toyota’s commitment to the World Endurance Championship and the 24 Hours of Le Mans has often been called into question, especially consider the perceived meagre budget granted to the Cologne-based team from Toyota headquarters in Japan. Over the years, however, it has become clear that Toyota value this programme as a key part of its research and development efforts. One day after seeing the 24 Hours of Le Mans slip out of their grasp, Toyota are looking ahead to the future. 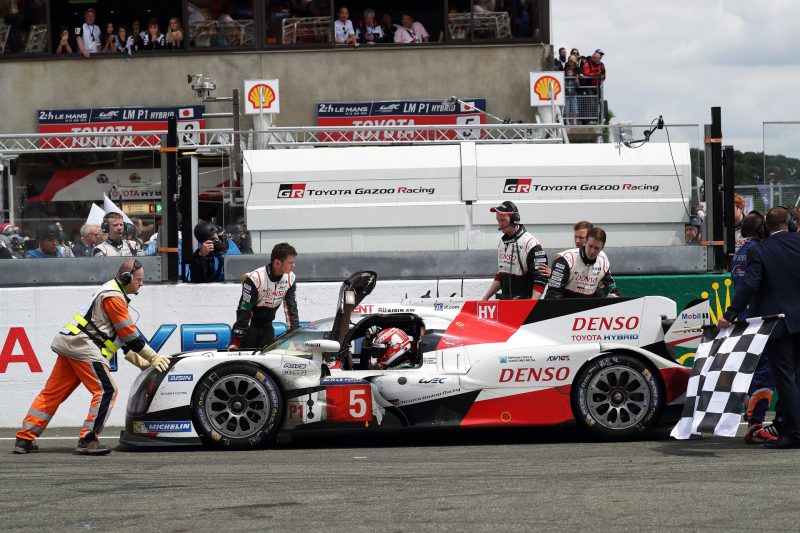 “Just as our dreams began to come true, we all made to burn that moment into our minds even as unbelievable heartbreak unfolded before our very eyes,” said Akio Toyoda, president of Toyota Motor Corporation. “When I think of what everyone in the team must be feeling… not to mention everyone who supported us… I honestly do not know what to say. I cannot find the words.” But Toyoda underlined that Toyota’s commitment to endurance racing is for the long term: “Having tasted the true bitterness of losing, we will return to the World Endurance Championship arena next year, and we will return to compete in the battle that is the 24 Hours of Le Mans. For our quest to build ever-better cars… For this, we will certainly come back to the roads of Le Mans.”

Toyoda also had some kind words for the eventual winners: “I would like to express my gratitude to all of the cars and drivers who fought alongside us on the track at Le Mans; particularly Porsche and Audi. We will be back next year, reborn, and ready to take you on with all of our might. Look out for the “sore losers”, Toyota, on the track next year. The fight is not over!”

Driver Kazuki Nakajima, who was in the car as in lost power on the penultimate lap of the race, was obviously disappointed, but confident looking ahead: “First of all thank you to all the team members; we did everything right. The car was great to drive. It was tough to have Porsche #2 only 30 seconds behind me towards the end but we had the pace and we managed it very well. It was only two laps missing and it’s a pity we didn’t get the trophy; the team deserved to win. When I was doing my last lap to the chequered flag, all the marshals and fans were really kind to me and that was very emotional. I want to say thank you for that. Let’s come back stronger and grab that trophy.”