The #6 Toyota Gazoo Racing TS050 of Kamui Kobayashi leads the 2016 24 Hours of Le Mans after the first six hours with the #1 Porsche 919 Hybrid of Mark Webber in second. Thiriet by TDS Racing leads LMP2, while it’s a Ford one-two in GTE Pro. The #78 KCMG Porsche leads GTE Am. 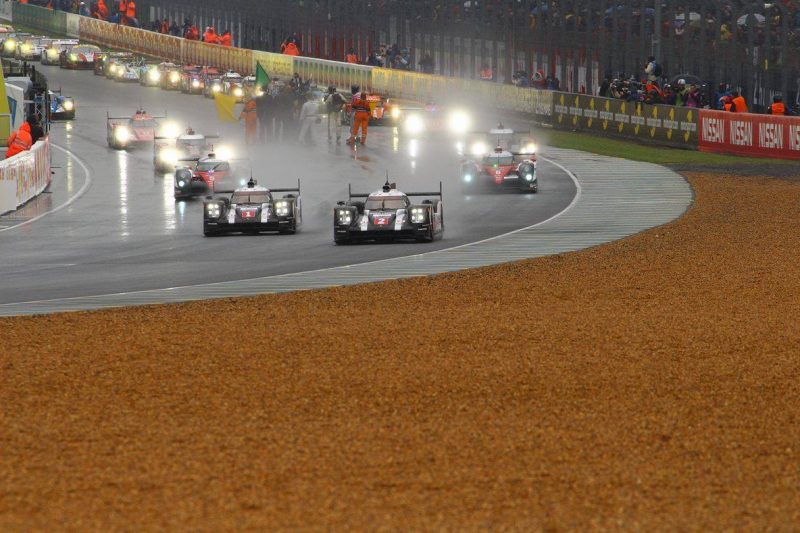 The race began under the safety car earlier this afternoon after torrential rain covered most of the circuit just 20 minutes before the cars were due to start. Thankfully the rain ceased and the race director deemed the track to be safe enough to race after around 30 minutes of SC running.

Porsche, Audi and Toyota quickly engaged in a fascinating battle at the front of the field, with the lead changing on numerous occasions between the three marques. As the race found its rhythm, the #1 Porsche of Brendon Hartley established a small lead ahead of Mike Conway in the #6 Toyota over the first stints, which Hartley and then Mark Webber succeeded in slowly increasing as the laps ticked by.

One key factor in the LMP1 battle is the fact that the Toyotas are completing 14-lap stints while the Porsches and Audis are only managing 13 laps. This has given Toyota a small advantage in terms of strategy, and indeed Kobayashi has made one stop fewer than Webber as things stand – hence the one-minute lead on track.

The #7 Audi R18 of André Lotterer pitted after an hour and a half due to issues with its turbocharger, which ultimately cost the German 20 minutes in the pits. The #4 ByKolles CLM P1/01 has also suffered a number of issues throughout the race and is some 30 laps down.

In LMP2, it was the #44 Manor Oreca of Roberto Merhi who made good his escape as the green flag flew, opening up a gap of some 45 seconds over the rest of the field. However, a spin for Matt Rao just after taking the car over saw the #44 car fall down the order. Benefitting from Rao’s mistake was the #46 Thiriet by TDS Racing car of Ryo Hirakawa, who leads at the six-hour stage ahead of the #36 Signatech Alpine of Stéphane Richelmi and the #47 KCMG of Matthew Howson. 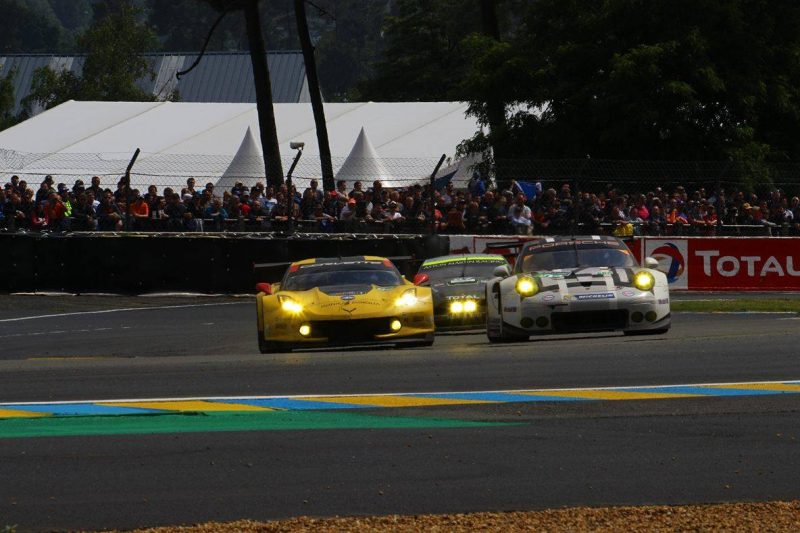 In GTE Pro, the early stages of the race saw the Porsche 911 RSRs come to the fore in the inclement weather, showing much better pace in damp conditions than the Ferraris, Fords and Aston Martins. However, as the track dried the Ferraris and Fords found the additional pace and challenged for the lead. The #51 AF Corse Ferrari 488 of James Calado had been fighting at the head of the field but was forced into the garage after four hours of the race with a technical issue. Another victim of technical gremlins was the #67 Ford GT of Andy Priaulx, Marino Franchitti and Harry Tincknell, which spent a considerable amount of time in the pits in the early part of the race.

Stepping up for Ferrari was the #82 Risi Competizione machine, which fought tooth and nail with the #68 and #69 Ford GTs for the lead in the hands of Giancarlo Fisichella and then Toni Vilander. Despite Risi’s best efforts, the #68 Ford GT of Joey Hand leads after the first quarter of the race, with the #66 machine of Stefan Mücke some 20 seconds behind. The Risi car remains in third, around 25 seconds down on the leader.

GTE Am also saw the Porsches come to the fore in the damp conditions, with the #78 KCMG machine making the early running ahead of the #88 Abu Dhabi Proton Racing. Now in the hands of Joel Camathias, the #78 car continues to lead the class ahead of Khaled Al Qubaisi in the #88 car.