The 24 Hours of Le Mans begins

If you think that the 24 Hours of Le Mans is just about racing twice around the clock, then you’re very much mistaken. Preparations for the great race begin over two weeks before the race weekend. We have taken a look at the key dates between now and the 24 Heures so you can keep track of all the action. 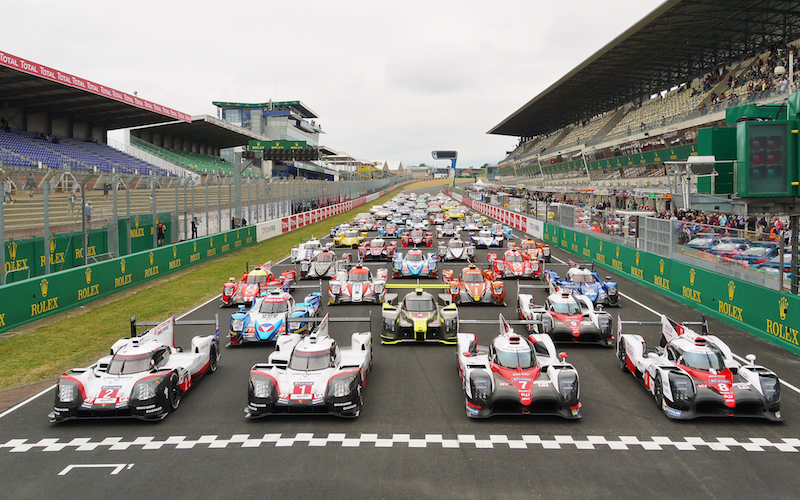 The track action at Le Mans actually begins on the first Sunday of June with the official Test Day around the Circuit des 24 Heures du Mans. Teams arrive at the circuit a few days beforehand to set up the pit garages that will be their homes for the next 14 days.

On Test Day, the Le Mans organisers open up the track for two four-hour sessions (one between 9am and 1pm and one between 2pm and 4pm) in which teams and drivers are free to run as many laps as they wish. Engineers and mechanics are on hand to help the teams create a set-up for the race, which is then adjusted as the drivers test out the cars.

The drivers, on the other hand, can take this opportunity to familiarise themselves with the Circuit des 24 Heures. Given that around three-quarters of the circuit is still made up of public roads that often change from year to year, Test Day also offers a valuable opportunity to get used to the tiny nuances in the circuit that may be the difference between victory and failure. Test Day also allows any rookies at Le Mans, such as Fernando Alonso, Jenson Button and Juan-Pablo Montoya at this year’s race, to complete the minimum number of ten laps required to obtain a licence to race in the 24 Hours.

Scrutineering in the heart of Le Mans

Another special feature of the Le Mans event is the official scrutineering checks for all of the vehicles. Scrutineering is a process carried out before every organised motor race, but usually behind closed doors in the paddock area of a circuit. At Le Mans, however, things are done a bit differently. The race organisers conduct their scrutineering checks in the heart of Le Mans town centre on 10th and 11th June in front of crowds of fans.

Vehicles go through the series of checks in a pre-determined order at the Place de la Republique in Le Mans. Fans are permitted to get up close and personal with their favourite teams and drivers as well as take photos and collect autographs.

The fight for pole

The track action finally begins in earnest on 13th and 14th June with the free practice and qualifying sessions. In qualifying, drivers and teams have three sessions of two hours each to lap the circuit in the quickest possible time. The final qualifying session ends at midnight on Thursday 14th June and only then will we know who will begin the 2018 edition of the 24 Hours of Le Mans on pole.

The weather always plays a decisive role on these two days. The circuit can be bathed in warm early-summer sunshine or also be affected by severe rain shows. Conditions can also change from session to session, so it’s important that drivers are out on track trying to record the quickest time they can at all times. Initial forecasts for the 2018 suggest that it may be a hot one, but as they say – “it always rains at Le Mans”.

The French tricolore will be waved to signal the start of the 24 Hours of Le Mans at 3pm on 16 June 2018. Take a look at our race calendar to find out more information about the race schedule, the track itself or the winners at Le Mans over the years.