The #2 Porsche 919 Hybrid of Marc Lieb, Romain Dumas and Neel Jani has won the 2016 24 Hours of Le Mans after one of the most astonishing race conclusions ever seen at La Sarthe. With the race seemingly in the bag, the #5 Toyota Gazoo Racing TS050 of Kazuki Nakajima crawled to a halt on the penultimate lap of the race after a complete loss of power and failed to finish within the required time. 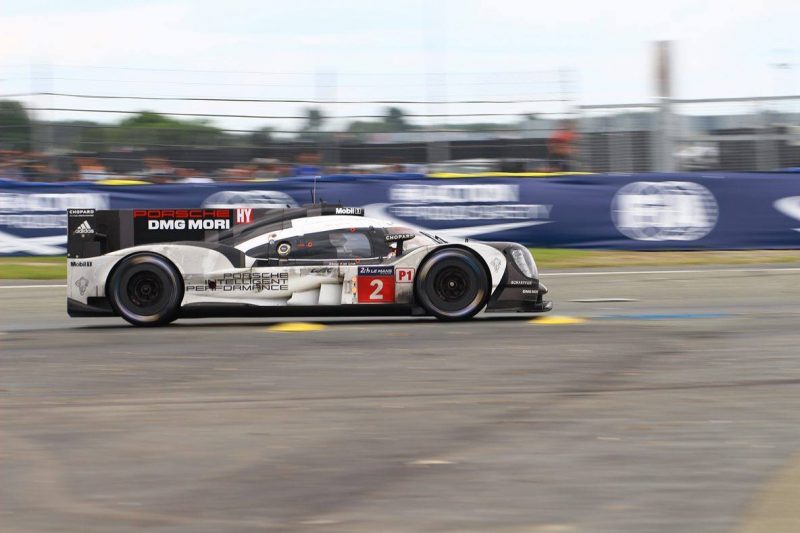 The #2 Porsche and the #5 and #6 Toyotas had been engaged in a yo-yo battle for the majority of Sunday’s running, especially after lengthy delays to the #1 Porsche 919 Hybrid with technical gremlins as the race headed towards midnight. The Japanese cars had been pursuing a fourteen-lap stint strategy, compared to Porsche’s thirteen-lap runs, which gave the #5 and #6 cars a key advantage as the race developed.

As night turned to day, the only question mark remained whether the Toyotas would be able to last the distance and, if so, whether they could lap at a sufficiently fast pace to negate the Porsche’s speed advantage.

The #5 machine overtook the #6 car midway through the morning and quickly established itself as the favourite for victory in the hands of Anthony Davidson, Sébastian Buemi and Kazuki Nakajima. Indeed, Porsche appeared resigned to defeat – erring on the side of caution by pitting in the final half-hour instead of attempting to close the 30-second gap to the lead car.

Then the 2016 24 Hours of Le Mans reached its extraordinary denouement. Coming out of the second chicane on the Mulsanne Straight, driver Kazuki Nakajima radioed the pits to say that he had lost all power. In scenes reminiscent of Jesús Pareja’s last lap drama in 1990, the Toyota TS050 gradually ground to a halt over the final half of the penultimate lap before finally coming to a standstill – with perhaps the ultimate cruelty – in front of the 100,000 fans gathered on the start-finish straight. 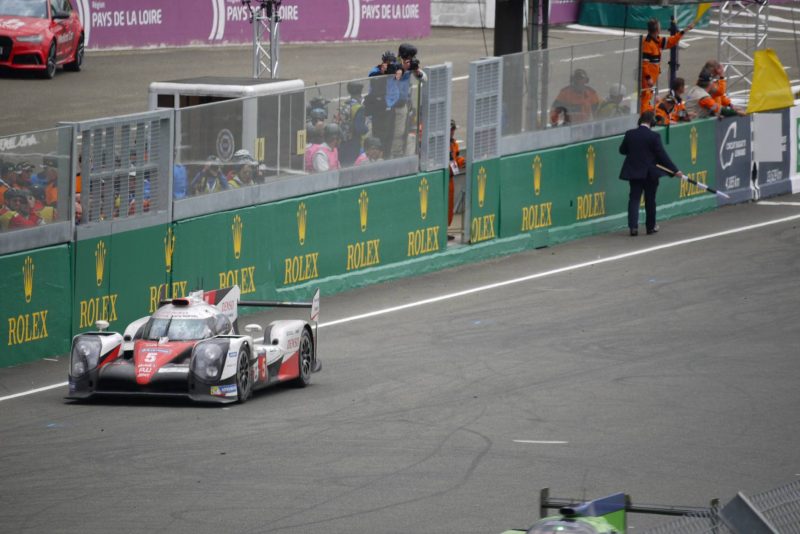 With the entire pit lane visibly shocked, the #2 Porsche rounded the final turn for its final lap and assumed the lead. All that Neel Jani had to do was complete the 8.5 miles to secure the most unlikeliest of victories for Porsche – the German marque’s 18th here at the famous race. Nakajima managed to complete the final lap on hybrid power only and finish second on the road. However, his final lap time of over 11 minutes was not within the required six minutes and the car was officially unclassified.

The drama at the front of the field somewhat overshadowed the results in the other classes. LMP2 was won relatively comfortably by the #36 Signatech Alpine A460 of Nicolas Lapierre, Gustavo Menezes and Stéphane Richelmi by a lap from the #26 G-Drive Racing Oreca 05 of Roman Rusinov, René Rast and Will Stevens. The second prototype class had also been a tactical battle, primarily involving the time the bronze-rated gentlemen drivers spent in the car. Signatech Alpine eeked out an advantage by ensuring that bronze driver Gustavo Menezes drove as much of his required six hours of driving as possible in the early stages. For G-Drive, Roman Rusinov was forced to drive the final stints to make up his six hours of mandatory driving, with pro driver René Rast unable to take over to make up the time.

In GTE Pro, the race-long battle between the #68 Chip Ganassi Racing Ford GT of Sébastian Bourdais, Joey Hand and Dirk Müller and the #82 Risi Competizione Ferrari 488 of Giancarlo Fisichella, Toni Vilander and Matteo Malucelli continued apace in the final six hours, with Joey Hand catching and passing Malucelli with four hours of the race remaining.

After extending his lead, Hand passed on to Dirk Müller, who established a comfortable lead over the Risi car. A spin for Toni Vilander in the Ferrari dashed any hopes of victory, but the drama was yet to come. A failure on the Risi Ferrari’s leader lights system saw the team issued with the black and orange flag, which means that the issue must be fixed in the pits. It was a decision that ran contrary to procedure earlier in the race, when a number of teams were given a great deal of time to fixed similar issues.

Risi decided not to pit, which would have cost them the podium, and ended up standing on the second step together with the #68 and #69 Fords.