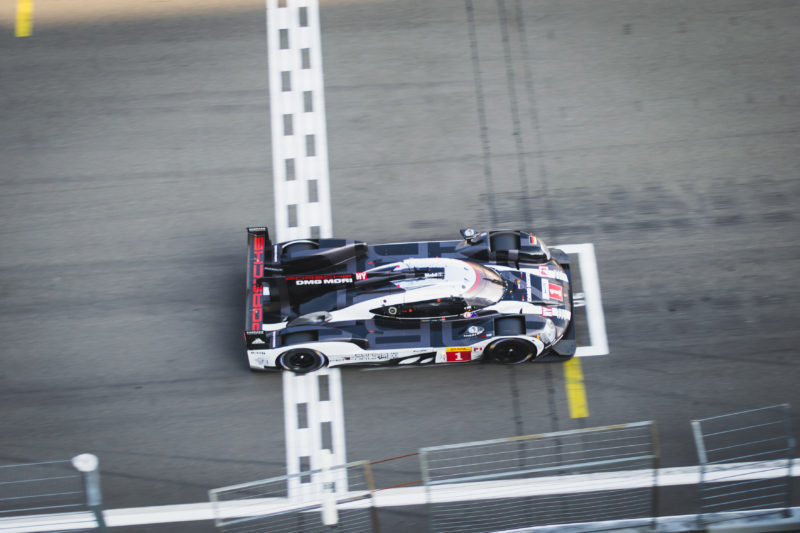 The #1 Porsche 919 Hybrid of Mark Webber, Brendon Hartley and Timo Bernhard crosses the line to take victory at the Six Hours of the Nürburgring

The #1 Porsche 919 Hybrid of Mark Webber, Brendon Hartley and Timo Bernhard was victorious in the Six Hours of the Nürburgring today after a fierce LMP1 battle that swayed between the Porsches and the Audis for almost the entire race.

The Audi R18s capitalized on their front row advantage, but Brendon Hartley soon got amongst them in the early stages of the race in his Porsche, taking second and setting his sights on Lotterer up front. The three German works cars remained close over the first couple of hours, with Neel Jani the only driver to put his foot wrong. A light collision with a Ford GT in the first corner cost the Swiss around 20 seconds.

However, just at the halfway stage, the #2 Porsche snatched the lead after Jani dived into the pits under full course yellow conditions. This opportune moment to take tyres and fuel put the #2 car, now in the hands of Marc Lieb, into the race lead as the other P1 machines had made their stops under green. Elsewhere, the #4 ByKolles CLM P1/01 suffered its second major mechanical problem in two races, with Oliver Webb stopping on the circuit just after the halfway stage and licks of flames exiting the car. The CLM had shown promising pace throughout the early stages of the race, and indeed led throughout the first stint.

At the front, Jani returned to the car with 2.5 hours remaining and appeared comfortable, but a major incident with the #88 Abu Dhabi Porsche 911 caused damage to the front end and, luckily for Jani, brought out a full course yellow. With Jani receiving a new front end, Mark Webber inherited the lead in the #1 Porsche – but Porsche Team told the Aussie to let the championship-leading car past. However, a drive-through penalty for the #2 for causing a collision cost Jani twenty seconds and sent the #2 car right back into the claws of the pair of Audis.

An unbelievable battle developed between firstly Jani and Loic Duval in the #8 Audi, and then Jani and André Lotterer in the #7 machine for second, third and fourth positions with no quarter asked or given. With just under an hour remaining, Lotterer closed in on the #2 Porsche and attempted a number of passes around the inside and outside. Then, at the final chicane, Lotterer tried once again to get by, making contact in the process and knocking off the #2 car’s legality panel.

The Porsche was called into the pits by the stewards, who stipulated that the car had to be repaired before continuing. This cost the championship-leading #2 car any chance of a podium. In the closing stages the #1 Porsche held a 30 seconds lead over the chasing Audis, which proved to be enough to secure Mark Webber, Brendon Hartley and Timo Bernhard’s first victory of the season. 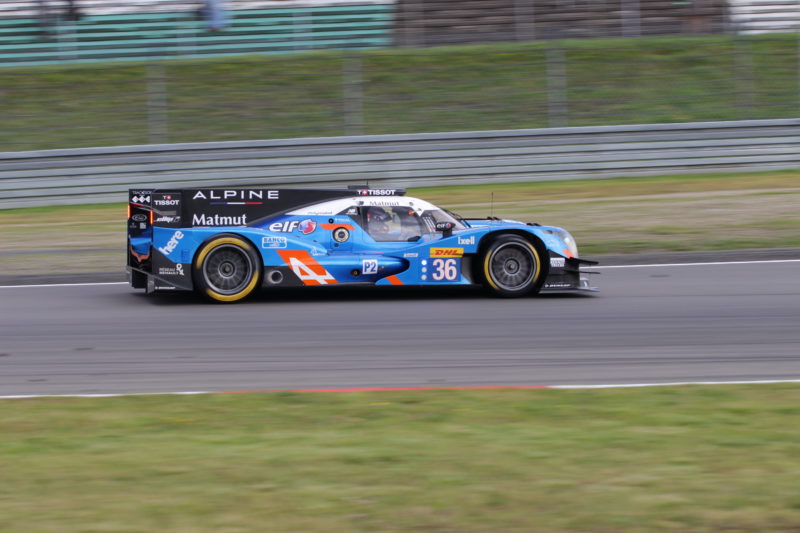 The #36 Signatech Alpine of Nicolas Lapierre, Gustavo Menezes and Stéphane Richelmi took the honours in LMP2.

The LMP2 was somewhat less hectic by comparison, but there was major drama for the pole-sitting #26 G-Drive Racing of Roman Rusinov, Alex Brundle and René Rast. By far the quickest car in the field, the Russian-entered Oreca had opened up a lead of around a minute by the end of the first stint with Rast behind the wheel. After handing over the car to Alex Brundle, the Oreca was forced to pit with what proved to be terminal gearbox problems.

The beneficiaries of G-Drive’s issues were Signatech Alpine, RGR by Morand Racing and Strakka Racing, which rose to the head of the field as the race went on. The #36 car led by around 40 seconds at halfway, but that lead was slowly eaten away at by Felipe Albuquerque and then Bruno Senna in the #43 car.

With the RGR car only twenty seconds behind the leading Signatech Alpine with one hour to go, Bruno Senna was set to stun. Indeed, he overdid it at the final chicane with just under an hour remaining, which gave the Signatech car a relatively easy run to the finish and third victory in succession for the French car. 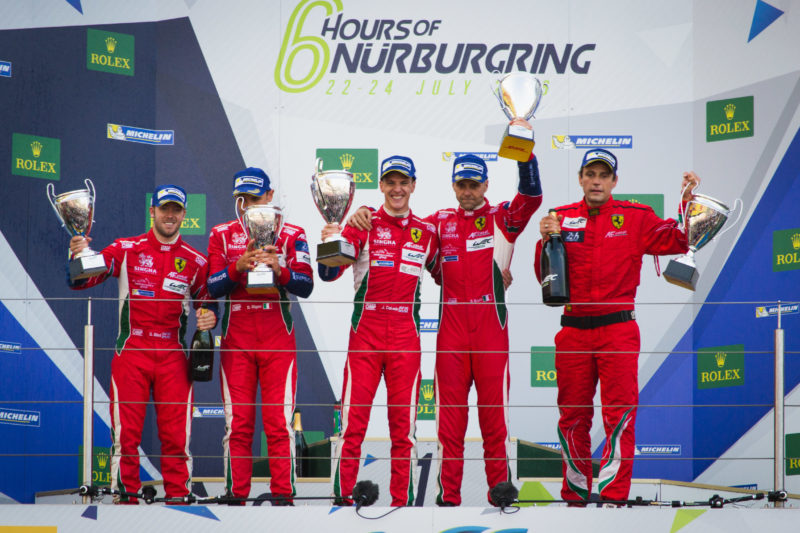 In GTE Pro, Aston Martin had made the early running – with Nicky Thiim putting in an impressive couple of stints in the pole-sitting #95 machine. Never far behind, however, was the #51 AF Corse Ferrari 488 of Gianmaria Bruni and James Calado. Indeed Bruni caught and passed Thiim just after the halfway stage, and ultimately pulled away to take the victory.

The sister #71 car recovered from early issues to take secure a AF Corse one-two. The #66 Ford GT of Stefan Mücke and Olivier Pla had been in contention for a podium, but a late drive-through penalty saw the early leader, the #95 Aston Martin promoted into third – a position it held through to the line. 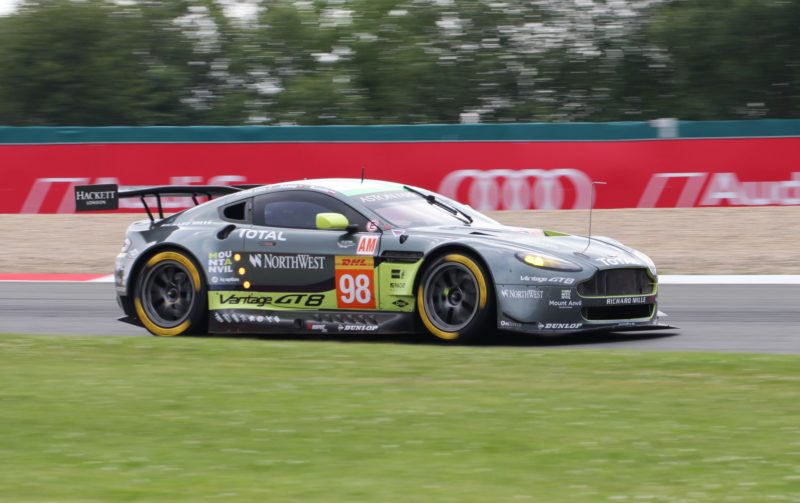 GTE Am was a story of Aston Martin domination, with the #98 car of Paul Dalla Lana, Pedro Lamy and Matthias Lauda recording their second victory of the season – 30 seconds ahead of the early pace-setter, the #78 KCMG Porsche 911 of Henzler/Ried/Camathias, with the #83 AF Corse Ferrari of Perrodo/Collard/Aguas a further minute down the road.

AF CORSE is far superior with its drivers and its cars. The Ford GT’s has shown only to be decent at LeMans, let’s face it the Ferrari 488 is by far the better car having won at a variety of tracks…and rather handily at that…the #51 Ferrari will catch and pass up both of the Ford GT’s…to win the team trophy, constructor trophy….and another drivers title for title for Bruni…who with Toni Vilander are the two best GT-PRO drivers in the world…