The #2 Porsche 919 Hybrid of Timo Bernhard, Brendon Hartley and Earl Bamber took victory at the 2017 24 Hours of Le Mans after an astonishing conclusion to the French endurance classic. The #2 car secured victory after a brilliant recovery drive, having spent an hour in the pits in the early stages of the race while mechanics changed the entire front axle. 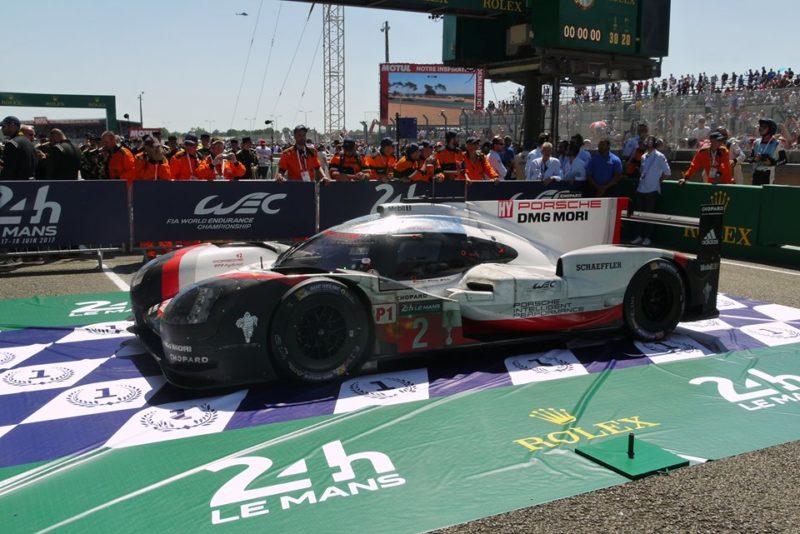 Bernhard, Hartley and Bamber’s teammates in the #1 car, André Lotterer, Nick Tandy and Neel Jani, had been set for a comfortable win at the Circuit de la Sarthe after all other LMP1 runners suffered technical issues or crash damage – including Toyota losing two of its cars in 20 crazy minutes in the middle of the night. However, Lotterer ground to a halt with oil pressure problems with just four hours of the race remaining – handing the lead to the #38 Jackie Chan DC Racing Oreca of Thomas Laurent, Ho-Ping Tung and Oliver Jarvis.

With the #2 car charging hard behind, it made up two laps on the lead car before catching and passing it with just one hour remaining in the 24 hours, despite the best efforts of the youngest driver in the field: Thomas Laurent.

The 2017 victory is Porsche’s 19th and their third in succession. New Zealander Brendon Hartley finally gets his name on the famous trophy after four years of disappointment, while Timo Bernhard wins his second Le Mans title and his first for Porsche. Fellow Kiwi Earl Bamber maintains his 100% record in the LMP1 class at Le Mans, having won on both of his starts for the Porsche works LMP1 team. 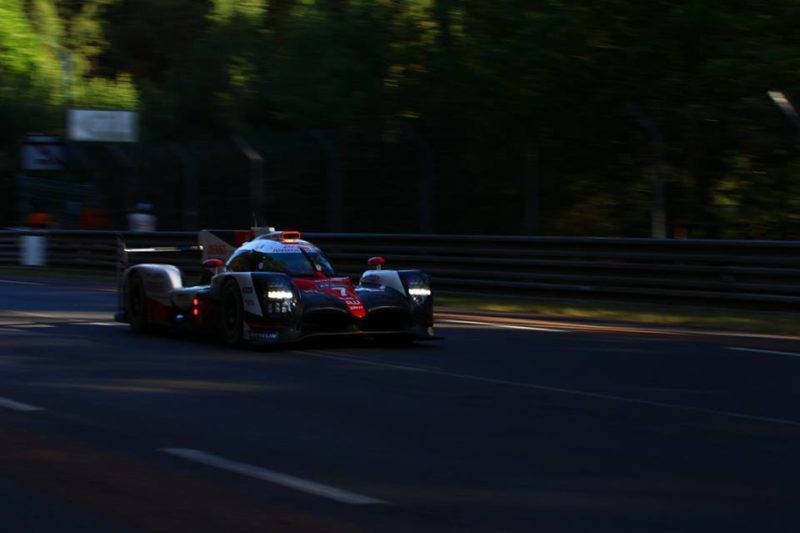 In LMP2, it was the pair of Vaillante Rebellions that made the early pace in the race, followed by the #38 Jackie Chan DC Racing car. The polesitting #26 G-Drive Racing machine had a poor start and then collided with the #88 Abu Dhabi-Proton Racing Porsche 911 RSR and was forced to retire.

With the demise of the LMP1 class, the LMP2 battle suddenly became a battle for the podium and even the lead. At the halfway point, the #31 Vaillante Rebellion Oreca of Nicolas Prost, Julien Canal and Bruno Senna held a 30-second lead from the Tung/Laurent/Jarvis #38 Jackie Chan DC Racing Oreca, which itself was also 30 seconds ahead of the sister #13 Vaillante Rebellion of Piquet Jr./Heinemeier Hansson/Beche. But as night turned to day, a number of issues – some, like a pit lane penalty for the #31 car for starting its engine while still raised up on the jacks, entirely self-inflicted – pushed the #38 car to the head of the field, where it stayed for the remainder of the race.

Further issues for the #31 machine brought the #35 Signatech Alpine Matmut car driven by Nelson Panciatici, Pierre Ragues and Alessandro Negrao into contention. However, a late off by Negrao dashed any hopes of Signatech repeating their 2016 class win and gave the initiative back to the #13 Vaillante Rebellion, which went on to score its maiden podium at Le Mans – ironically in LMP2, after so many years just falling short in LMP1. 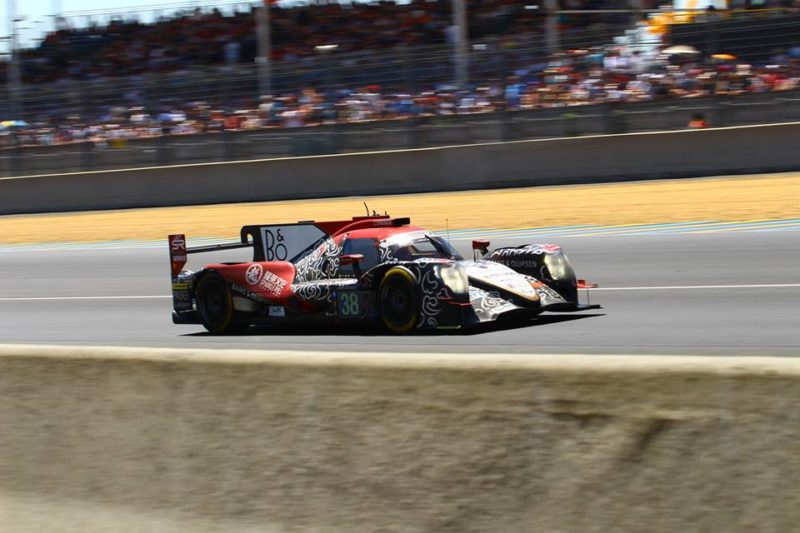 GTE Pro delivered the head-to-head battle it promised, with the balance of performance formula this time perfected to ensure 24 hours of wheel-banging, bumper-to-bumper racing. Battles for the lead and other key places were ten a penny, as cars chopped and changed on their pit strategies and tried to optimise any advantages they may have gained.

In fact, it became more a question of who would make the first mistake and lose touch with the breakneck speed of the class battle. The #82 Risi Competizione Ferrari 488 was one of the first to fall out of contention, although through no fault of driver Pierre Kaffer, who was spiked into the barriers after around four hours of the race by an ill-judged move from Mathieu Vaxivière in the #28 TDS Racing car.

By the halfway point, the #66 Ford GT (Pla, collision with the barriers at Indianapolis) and the #64 Corvette C7.R (Milner, accident in the Porsche Curves) had dropped away, but the remainder of the field were astonishingly still on the same lap and separated by mere seconds. 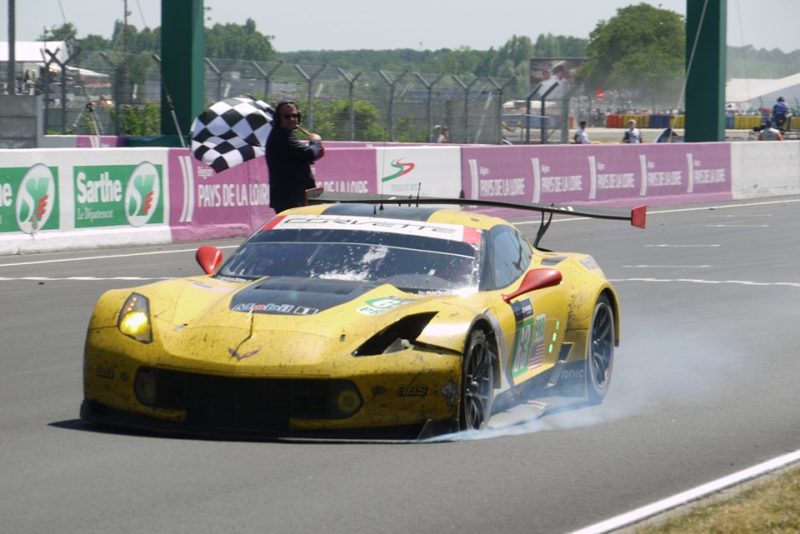 A topsy-turvy battle throughout the morning’s running eventually saw the #63 Corvette of Jordan Taylor, Jan Magnussen and Antonio Garcia emerge at the head of the field quickly pursued by the #97 Aston Martin Vantage of Turner/Serra/Adam and the #67 Ford GT of Tincknell/Derani/Priaulx.

In an edge-of-your-seat finale, Taylor attempted to fight off the efforts of Johnny Adam with just 40 minutes remaining. On the penultimate lap of the race, Adam tried his luck down at Arnage but braked a little too late and ran wide, before Taylor brushed past him and appeared to have decided the victory in favour of the US muscle car manufacturer. However, the contact was more severe than first though, with Taylor damaging part of the steering and ultimately losing first place in class to Adam on the final lap, with Harry Tincknell in the #67 Ford also sneaking past the American into the final corner. It was a worthy end to a fantastic class battle.

GTE Am was a little less frantic. The #84 JMW Motorsport took a fantastic win in its first Le Mans with the new Ferrari 488 with the help of drivers Dries Vanthoor, Will Stevens and Robert Smith. Second was the #55 Spirit of Race Ferrari of Cameron/Scott/Cioci, while the #62 Scuderia Corsa machine of Townsend Bell, Cooper MacNeil and Bill Sweedler made it a Ferrari 1-2-3 in class.