Porsche on pole for the 6 Hours of the Nürburgring 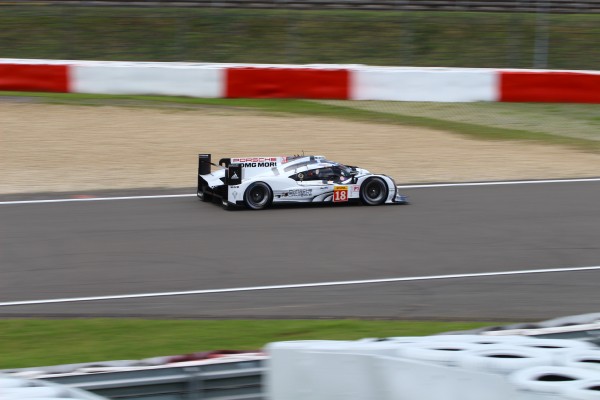 Once again it was a story of Porsche domination in this afternoon’s LMP qualifying session. The #18 car of Romain Dumas, Neel Jani and Marc Lieb recorded the fastest average lap time of 1:36.473, over a second ahead of the next non-Porsche challenger. The sister #17 car of Webber/Bernhard/Hartley will start second, posting an average time just one tenth behind the #18 car.

“It was a great qualifying,” said Porsche driver Romain Dumas. “Marc did a terrific job, but it was a hard battle with the sister car.” Marc Lieb praised the balance of the car, and it seems that Porsche will take some beating in tomorrow’s six-hour race: “The car was very well balanced, and it was good fun,” said the German driver. “I think all six Porsche drivers are very close together here, the gap is only a few tenths of a second, so the race will be intense.”

The Audis were unable to match their Friday performance, but still finished the qualifying session in third and fourth positions. The cooler temperatures on Friday appeared to suit the Audi R18 e-tron quattro, but with the weather only expected to get warmer for tomorrow’s race, the Audi’s will have to rely on their long-run pace to beat Porsche to the chequered flag.

In LMP2, it was the #42 KCMG machine of Matt Howson, Richard Bradley and Nick Tandy that took pole ahead of the team’s season-long rival, the #26 G-Drive Racing car of Roman Rusinov, Julien Canal and Sam Bird. Matthew Howson began the session in the #42 machine, before handing over to freshly crowned Le Mans winner Nick Tandy, who put in a set of blistering times to stay ahead of the hard-charging Sam Bird in the #26 car.