Porsche lead the way in FP1

Porsche Team look to be continuing their 2015 form with a dominating performance in Friday’s First Practice session. The German marque took the top two spots on the timesheets, with Timo Bernhard recording the quickest time of 1:42.182. Elsewhere, G-Drive Racing topped the LMP2 times, while the AF Corse Ferraris were the cream of the crop in GTE Pro and GTE Am. 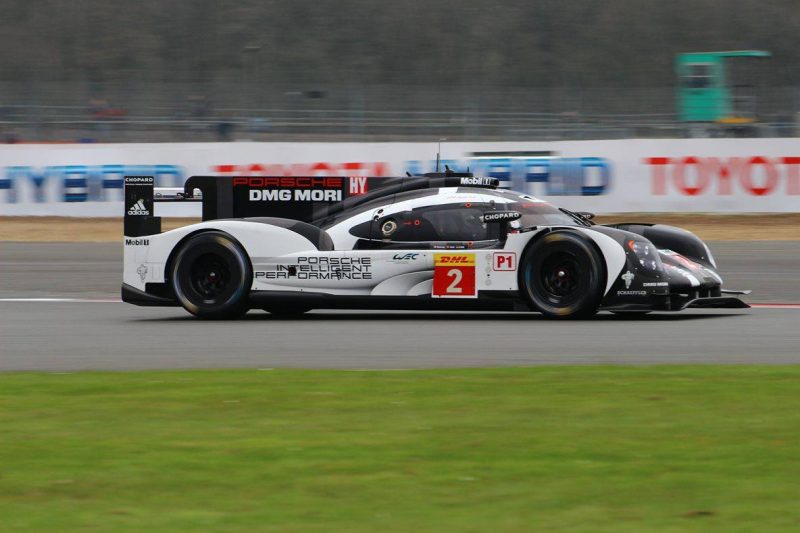 Silverstone greeted the teams with a traditional British welcome for the first timed session of the WEC season on Friday afternoon. FP1 began on a wet but drying track, with most of the LMP1 runners getting out on track. Porsche lighted up the timesheets almost immediately, going consistently quicker than their LMP1 competitors. A drying track saw times fall, with Timo Bernhard in the #1 Porsche 919 Hybrid recording the best lap of the session of 1:42.128 on lap 38 of a 41-lap run. Eight tenths behind was the sister #2 car, with Marc Lieb setting a fastest time of 1:42.996.

Toyota Gazoo Racing rounded out the top three, with Anthony Davidson posting a fastest time of 1:43.765, over a second down on the #1 machine. The #8 Audi R18 of Lucas di Grassi, Loic Duval and Oliver Jarvis was fourth-quickest with a 1:43.917, which also came right at the end of the session.

For the privateers, the #4 ByKolles Racing CLM P1/01 finished the session on top, showing how much progress the Austrian-entered team has made over the close season. James Rossiter posted that car’s fastest time of 1:48.860 on the final lap of a 31-lap run, good enough for seventh in the LMP1 classification. The #13 and #12 Rebellion R-Ones rounded off the LMP1 class, but only ended up running 32 laps between them.

German driver René Rast was the star of the show in LMP2, posting a fastest time of 1:50.428. Rast was the only driver to pilot the #26 G-Drive Racing Ligier JS P2, running a total of 28 laps. Newcomers Baxi DC Racing finished the session in surprising second position, but – somewhat less surprisingly – it was old hand Nelson Panciatici who posted the fastest lap time for the Chinese entry of 1:51.278. Filipe Albuquerque was the third-fastest of the session for RGR Sport by Morand, finishing the just under two tenths behind Panciatici.

GTE was all about Ferrari, with AF Corse topping the timesheets in both the Pro and Am classes. Gianmaria Bruni was the fastest in GTE-Pro, recording a 2:01.067 on lap 19 of a 26-lap run in the #51 Ferrari 488. Davide Rigon went second-quickest in the sister Ferrari with a fastest lap time of 2:02.218. Rounding out the top three was the #77 Dempsey-Proton Racing Porsche 911 RSR, with Michael Christensen going fastest with a 2:02.378.

Rui Aguas was the fastest man in GTE Am, setting a fastest time of 2:04.093 in the #83 AF Corse Ferrari F458 Italia as the racing line began to dry at the end of the session. The #86 Gulf Racing Porsche 911 RSR made a promising start to their 2016 WEC effort, finishing second in the session just one tenth back on the Ferrari. Debutant Ben Barker was the quickest man for the British squad. Another Porsche finished off the top three, with Klaus Bachler posting a fastest lap time of 2:03.344 for the #88 Abu Dhabi Proton Racing entry.