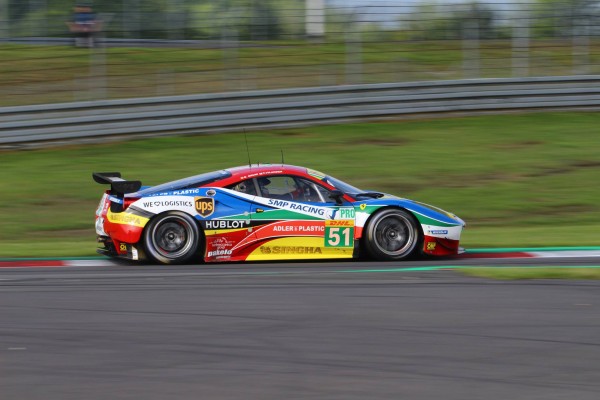 Porsche recorded the quickest times of the weekend so far, with Marc Lieb setting a 1:36.036 in the #18 919 Hybrid in dry and sunny conditions at the Nürburgring. Strakka Racing posted the best time in LMP2, while the #51 Ferrari topped the GT times.

The early morning mist was just beginning to clear as the first cars took to the Nürburgring GP circuit on Saturday morning for Free Practice 3. It was an action-packed session, with drivers up and down the field testing out the limits in the final practice session before Saturday’s qualifying. The #8 Audi was just one of the front-runners who found themselves facing the wrong way after pushing the limits too far.

The #18 Porsche 919 Hybrid of Marc Lieb, Romain Dumas and Neel Jani recorded the session’s quickest time, a 1:36.036. The second Porsche of Timo Bernhard, Mark Webber and Brendon Hartley was just 0.6 seconds back, followed by the two Audis. Toyota continued their disappointing form so far this season, and were unable to come within two seconds of the leading cars.

In LMP2, the top four were separated by less than a second, with the Strakka Racing #42 machine topping the time sheets. The #49 KCMG Oreca driven by Matt Howson, Richard Bradley and Le Mans winner Nick Tandy was just 0.082 seconds further behind, underlining the closeness of the LMP field.

The Ferraris were out front in GTE Pro, with the #51 car of Gianmaria Bruni and Toni Vilander finishing the session on top with a 1:54.331, with the fellow AF Corse machine of Davide Rigon and James Calado a tenth of a second behind.

In GTE Am, front-right tyre damage for Paul Dalla Lana in the #98 Aston Martin Racing machine brought out a full course yellow halfway through the session, with the V8 Vantage unable to return to the pits under its own power. The #98 car still managed to put in the second-fastest time of the session, a 1:55.778. But it was the #88 Porsche 911 RSR of Christian Ried, Khaled Al-Kubaisi and Earl Bamber that recorded the fastest time with a 1:55.228, again the fastest of the weekend so far in class.