Porsche took provisional pole for the 24 Hours of Le Mans in the first qualifying session this evening. The #2 Porsche 919 Hybrid of Romain Dumas, Neel Jani and Marc Lieb finished the session with the quickest lap time of 3:19.733. In GTE Pro, Ford provisionally locked out the front row. 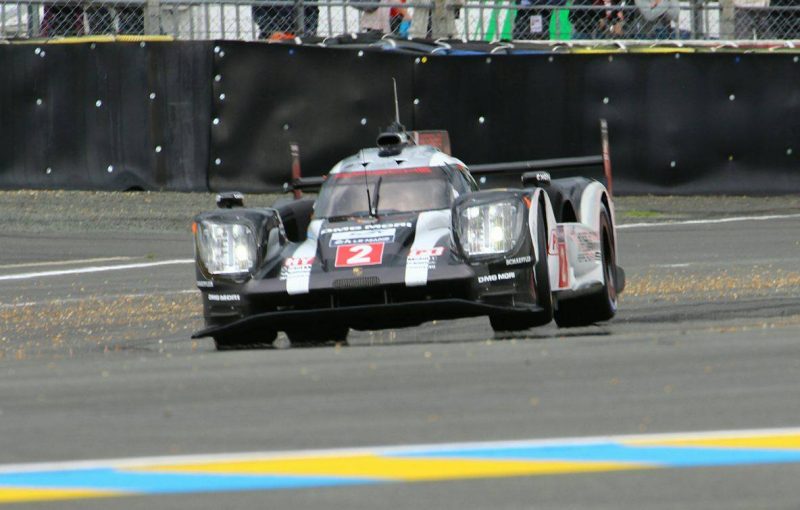 The first qualifying session for the 2016 24 Hours of Le Mans began in cool but dry conditions as dusk turned to night time in La Sarthe. The LMP1 machines wasted no time in posting fast times, with concerns surrounding the weather conditions for tomorrow’s second and third qualifying sessions.

Stéphane Sarrazin set an early marker of 3:20.737 in the #6 Toyota Gazoo Racing TS050, but Neel Jani soon eclipsed this lap time with a 3:19.733 in the #2 Porsche. It was a blindingly quick lap for the Swiss driver, but could have been even better had he not been held up by traffic in the Porsche Curves.

Jani’s time wouldn’t be bettered in the session, with only the sister car getting within half a second and slotting into second position. Toyota and Porsche spent most of the remainder of the session collecting data on long runs, with laps times hovering around the 3:23 and 3:24 mark.

Audi missed the majority of the first hour as work was still be completed on both of its cars, most notably on the #8 R18’s broken front drive train. Both machines then took to the track but could only post lap times of 3:22.466 (#8) and 3:22.780 (#7). Elsewhere in LMP1, the #4 ByKolles CLM P1/01 failed to exit the garage following its fire in the Free Practice session. Significant damage was suffered to the rear wiring, which could not be replaced in time.

German driver René Rast was the fastest man in LMP2 for the #26 G-Drive Racing entry, posting a fastest time of 3:36.605- Six tenths back was the Baxi DC Racing Alpine A460 of David Cheng, Nelson Panciatici and Ho-Pin Tung in second position, while second Alpine of Signatech Racing rounded off the top three with a 3:37.225.

Some astonishing times came in GTE Pro, with Olivier Pla in the Ford GT almost immediately going 2.5 seconds quicker than the 2015 GTE Pro pole time in the #66 Chip Ganassi Team UK car. AF Corse was the only team capable of challenging the Fords, with the #51 488 of Gianmaria Bruni, James Calado and Alessandro Per Guidi heading up the time sheets for a good while.

A lurid spin on the entry to the Porsche Curves for Giancarlo Fisichella in the #82 Risi Competizione Ferrari 488 brought out the red flag to recover the car and clear gravel debris. The car was recovered but did not return to the track for the session, suggesting that a mechanical issue may have caused the incident. Ricky Taylor also enjoyed a sojourn into the gravel, this time at Mulsanne Corner, with the US driver returning to the pits with only minor damage.

As the session progressed the #51 and then the #69 Ford of Ryan Briscoe both broke the 3:51 barrier. It appeared, to all intents and purposes, that that #69 car would take the honour of being overnight pole-sitter, but Dirk Müller in the #68 Ford pipped Briscoe, Dixon and Westbrook to the post at the death with a 3:51.185 on his final lap of the session. With the closest Porsche and Aston Martin around four seconds down on the pole time, we may see some serious questions being asked of the ACO’s balance of performance formula – particularly last week’s decision to give the Fords weight breaks.

GTE Am had been a story of Ferrari domination, with the #61 Clearwater Racing Ferrari F458 Italia of Rob Bell, Keita Sawa and Mok Wang Sung holding the top spot for almost all of the session with a fastest lap time of 3:56.827. Behind them, it was the two AF Corse Ferraris of Cameron/Griffin/Scott and Aguas/Collard/Perrodo that locked out a 1-2-3 for the Italian marque, but a quick lap of 3:57.198 for Matthias Lauda in the #98 Aston Martin Racing as the session came to a close salvaged some pride for the British marque.