Porsche fend off Toyota to win in Shanghai

An unfortunate puncture for Toyota cost them the chance of going for the win, but it was a combination of a poor day for Audi and a win for Porsche which has sealed the manufactures championship for Porsche in Shanghai for the second year running. However the drivers title will go to the wire in Bahrain between the #2 Porsche and the #6 Toyota. 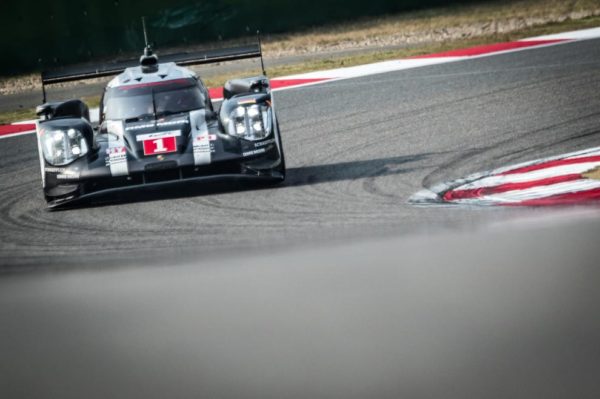 The fourth hour was important in terms of the overall championship. The #5 Toyota of Sebastian Buemi caught and passed the #2 championship leading Porsche of Roman Dumas, which helped close the gap between the #6 Toyota and the #2 car in the championship standings.

Next up the drama continued in LMP1 as Audi had an uncharacteristic moment. When, in traffic, the #8 of Oliver Jarvis ended up tagging the side of Treluyer’s #7 Audi. The contact pitted the #7 into a spin which lost it around ten seconds in it’s hunt for fourth place.

Through the round of pit stops towards the end of the fourth hour, Porsche’s #2 car managed to re take the position that Buemi had taken earlier in the hour. 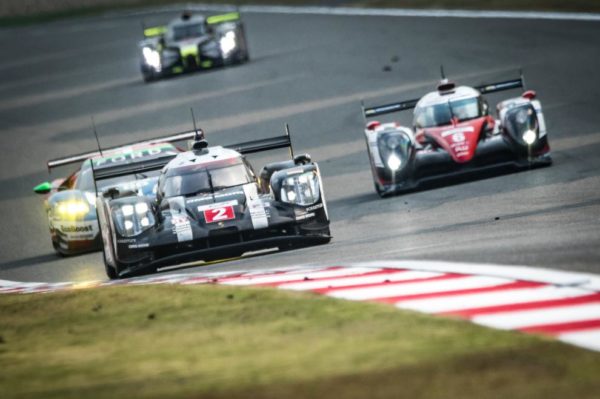 Audi’s day continued to go from bad to worse as the #7 R18 e-tron quattro headed up on to the dolly’s and back into the garage for repair works at the rear end of the car. The air jack connector was the broken part which suffered damage after contact with the #8 Audi.

At the end of the hour it was Mark Webber’s turn to lead the field in the #1 Porsche 919 with Mike Conway keeping the Australian driver honest in second place. Third had gone back the way of Porsche’s #2 car, however Jani was under the close attentions of Buemi. Audi continued to sit at the bottom of LMP1, even the leading LMP1 privateer ByKolles team putting Audi under pressure.

Will Stevens led LMP2 for G-Drive Racing in their Oreca 05. Sean Gelael sat in the second position in class for ESM. The #36 Alpine held third in class which was good damage limitation after a far from clear run for the championship leaders. 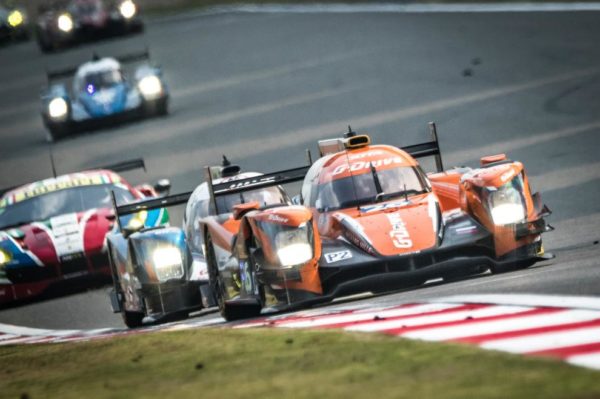 Ford continued to dominate GTE-PRO. Back up to a 1-2 being headed by Harry Tincknell. Oli Pla holding second place ahead of James Calado for Ferrari now in third. Pedro Lamy led Collard in GTE-AM with Joel Camathias’s KCMG in third

It was Toyota’s turn to have a part in the drama as their second place car had a sudden drop in pressure on the left rear tyre. This forced the Japanese team to pull the car in and change the tyre, which in turn gave Porsche their 1-2 at the front of the field back.

In the mean time Sebastian Buemi set about getting his place back from the #2 Porsche. Which he did successfully with 92 minutes left in the race. The 2014 winner, Buemi, made his way up the inside into the first hairpin and managed to capitalise as Jani was struggling with tyre wear. All the time the two Swiss drivers battling allowed Mike Conway to close on the pair of them.

Though the pit stops though the Porsche Toyota yoyo continued and it put the #2 back into second place. With all eyes on the world championship, it became all about where the #6 car can follow in relation to the #2 Porsche. Toyota swapped positions to promote the #6 into third place. However from Porsche’s point of view the order is the wrong way around for them in relation to the championship standings.

Porsche’s #1 led going into the final hour with a minute lead over the #2 championship leading car. #6 and #5 Toyota sat in third and fourth respectively. ByKolles still headed the LMP1 privateer class. 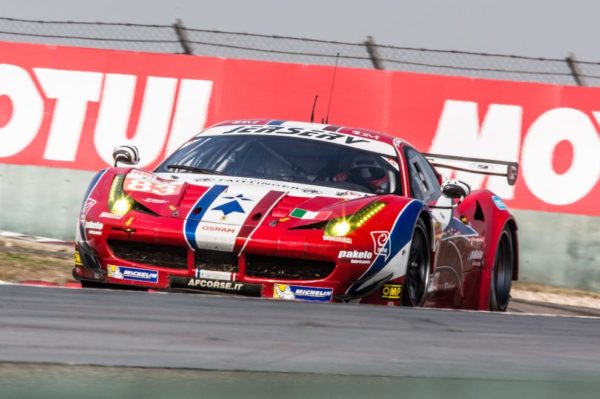 LMP2 still had the Russian team G-Drive at the front. ESM held second with RGR Sport under pressure by champions elect Signatech Alpine for third in class.

In GTE-PRO it was none other than Andy Priaulx and Harry Tincknell heading the class in the #67 Ford GT ahead of Mucke in the #66 car in second. Third was Bruni in the #51 AF Corse Ferrari. Aston Martin continued to lead GTE-AM ahead of Ferrari and KCMG’s Porsche.

It was all eyes on the Toyota tag team taking on the #2 919 Hybrid. Sebastian Buemi managed to make the move on the way into turn 6 sweeping around the outside of Neel Jani. The Swiss driver then responded going into the penultimate corner but went too deep on the marbles on the inside and lost more time, the Toyota holding the position. The move was key as it meant that Porsche were no longer in a position to swap the #1 and #2 cars around. Now it was all eyes on Davidson to see if he could take more points from the #2 Porsche.

It was to be in the pit stops that Toyota pulled their trump card, stopping for fuel, no tyres on both cars. In turn this cut the lead to 41 seconds and put the #5 Toyota ahead of the #2 Porsche with 20 minutes on the clock. It was all about if Toyota could get their tyres to the end. It was to be a tall order in race where no one had double stinted tyres so far.

Porsche held on to win the six hours of Shanghai with Timo Bernhard, Brendon Hartley and Mark Webber the victorious drivers for the second year in a row. This time also breaking the event’s distance record. The win also wrapped up the win for Porsche in the manufactures championship. Toyota kept the championship challenge alive with the #6 car finishing second and the #5 TS050 coming home third to steal points away from the #2 Porsche. ByKolles almost managed to split the Audis in sixth. however Marcel Fassler took his Audi R18 e-tron quattro past the Austrian car with two minutes remaining.

LMP2 saw a second successive win for G-Drive. ESM finished in an impressive second in class with RGR Sport completing the podium. However Signatech Alpine stole the headlines wrapping up the drivers championship for Nicolas Lapierre, Gustavo Menezes and Stephane Richelmi.

GTE-PRO was Fords day. They pulled off the 1-2 that was on the cards all day with the #67 car of Tincknell and Priaulx taking the win. The latter breaking the class lap record by 1.5 seconds. The #66 Ford GT of Olivier Pla and Stefan Mucke finished second. Bruni and Calado rounded off to podium.

GTE-AM saw drama on the final lap as Felipe Albuquerque lauched down the inside of the KCMG anf AF Corse Ferrari, causing the championship leading Ferrari to spin and loose ground. Aston Martin kept their title hopes alive by taking the #98 car to victory. KCMG’s Porsche held on to second, as did AF Corse’s Ferrari which held on to third.