The #2 Porsche 919 Hybrid of Romain Dumas, Neel Jani and Marc Lieb recorded the fastest time in the four-hour Free Practice session for the 24 Hours of Le Mans. KCMG topped the time sheets in LMP2, while Ferraris finished first in both GTE Pro and GTE Am. 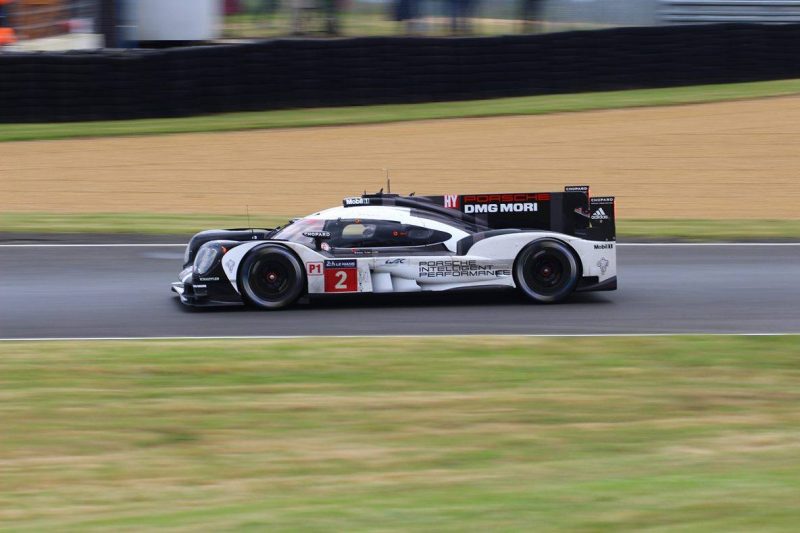 The only free practice session at this year’s 24 Hours of Le Mans began in inclement weather earlier this afternoon in Western France. Rain showers came and went, giving teams a valuable chance to gather data in wet-weather conditions. Numerous incidents around the track, including some serious problems for the #4 ByKolles CLM P1/01 and the #66 Ford GT saw the red flag come out on three separate occasions. A red flag for an incident appearing to involve the #6 Toyota Gazoo Racing TS050 and the #28 Pegasus Racing LMP2 car brought the session to a premature end.

Fastest in LMP1 was the #2 Porsche 919 Hybrid with a time of 3:22.011, recorded with just minutes of the session remaining by Neel Jani, who also put the car on pole here last year. The sister #1 car finished second, half a second further behind. Third place was taken by the #8 Audi R18 of Lucas di Grassi, Loic Duval and Oliver Jarvis, with a best time of 3:22.985. The #6 Toyota Gazoo Racing car limped to the pits at the end of the session with major damage to the front end after an incident for Stéphane Sarrazin.

There was drama in the LMP1 privateer class, too, with the #4 ByKolles CLM P1/01 catching fire on the Mulsanne Straight around halfway through the session. The flames were put out relatively quickly by the marshals and the car returned to the box for repair. According to driver Pierre Kaffer, the LMP1 machine should be back out for qualifying later tonight. Nelson Piquet Jr was the quickest privateer driver, posting a fastest lap time of 3:28.036.

LMP2 was a one-two for Oreca chassis, with the #47 KCMG Oreca 05 – victorious here last year – of Richard Bradley, Matt Howson and Tsugio Matsuda recording a fastest lap time of 3:39.133. Six tenths further back was the (Oreca-built) #36 Signatech Alpine A460 of Nicolas Lapierre, Gustavo Menezes and Stéphane Richelmi. Panis-Barthez Competition broke the Oreca stronghold by finishing third with a best time of 3:40.308 in the hands of Paul-Loup Chatin.

GTE Pro was dominated in the early stages by the Chip Ganassi Racing Ford GTs, with Olivier Pla going faster than any car had gone at Test Day with a 3:55.081 before the early-session rain arrived. Later on, James Calado rose to the fore in the #51 AF Corse Ferrari 488, posting a fastest time for the session of 3:53.833 – over a second quicker than last year’s pole time. The Risi Competizione Ferrari finished the session in second, just three tenths of a second further back. The fastest Ford was Dirk Müller in the #68 Chip Ganassi Team USA with a 3:54.893. There was late drama for Billy Johnson in the #66 car, which made heavy contact with the barriers at Indianapolis before limping back into the pits.

Ferrari were also top of the time sheets in GTE Am, with Rob Bell going fastest for the #61 Clearwater Racing Ferrari F458 Italia. The platinum-rated driver’s fastest time of 3:57.543 was some 1.5 seconds quicker than the second-placed car, the #62 Ferrari of Scuderia Corsa – third-place finishers here last year. Emmanuel Collard rounded off a 1-2-3 for Ferrari in GTE Am with a 3:59.294.

The first qualifying session takes place later on this evening at 10pm local time and is live on Eurosport and the official FIA World Endurance Championship app.