The #5 Toyota Gazoo Racing TS050 of Sébastian Buemi leads Le Mans with six hours remaining ahead of his teammate Mike Conway in the #6 car. Marc Lieb remains less than a minute behind as the three cars continue their yo-yo battle for the lead. 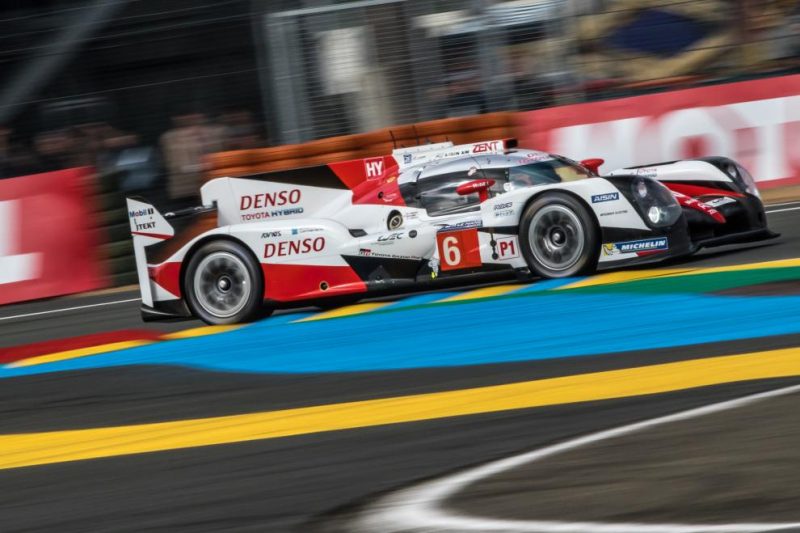 In the early hours of the race it was Kamui Kobayashi and Romain Dumas battling for the lead at the head of the field, with the French driver consistently faster in the Porsche. Dumas ate away at a 45-second lead generated through Toyota’s pit-stop strategy and lower fuel consumption, reducing it to roughly 30 seconds with 11 hours of the race remaining.

Shortly after handing over to Marc Lieb, the Porsche was back in the pits after just five laps due to a slow puncture on the #2 Porsche 919 Hybrid. This put the car out of kilter, and Lieb risked exceeding the maximum driving time of four hours. At the end of Lieb’s stint there was confusion in the Porsche pit, as Dumas was woken up to take over the #2 car on older tyres instead of Neel Jani, who was the next driver on the rotation – a decision that has yet to be fully explained, but cost the team even more time in the pits.

The #4 ByKolles CLM P1/01 then caught fire at 7:30 am, with Simon Trummer forced to park up the LMP1 privateer entry in the Porsche Curves. Oil was likely dropped by the ByKolles machine, as soon after the incident a number of other cars crashed or span around the track – including the #46 Thiriet by TDS Racing Oreca and the #35 Signatech Alpine A460.

The safety cars were withdrawn with around seven hours of the race remaining, and – bunched up by the safety car period – the Toyotas and the remaining Porsche continued their fierce battle for the LMP1 lead. Buemi overtook Conway for the lead and made good his escape. He now leads by 26 seconds.

There was drama in LMP2, with the #46 Thiriet by TDS Racing machine crashing out of second position in class at Mulsanne Corner, likely as a result of oil dropped by the ByKolles car. The fourth-placed car, the #35 Signatech Alpine car of Nelson Panciatici, also crashed out of the race after skidding straight-on at the first chicane and making heavy contact with the retaining wall.

With six hours of the race remaining, the #36 Signatech Alpine of Stéphane Richelmi leads the class by a lap from the #26 G-Drive Racing Oreca 05 of René Rast. Victor Shaytar is three laps further back in third position for the #37 SMP Racing BR01.

GTE Pro remained one of the closest battles on the track for the majority of the early hours. Originally a four-car fight for the lead, the action has been distilled into a straight-up dogfight between the #82 Risi Competizione Ferrari 488 and the #68 Chip Ganassai Racing Ford GT. The gap was relatively constant at around 15 seconds, but the #68 car was then given a drive-through penalty with six-and-a-half hours left for leaving the engine running during refuelling. Matteo Malucelli currently leads by 36 seconds for Risi, with Dirk Müller giving chase in the Ford.

Elsewhere, it has not been the best of days for AF Corse, as the Italian team lost both the #71 and the #51 cars in the third quarter of the race. The #64 Corvette Racing C7.R is also out of the race after a major shunt for Tommy Milner on the run up to the Dunlop Chicane.

In GTE Am, Bill Sweedler leads the class for the #62 Scuderia Corsa Ferrari F458 Italia by around a lap ahead of David Heinemeier-Hansson in the #88 Abu Dhabi Proton Racing Porsche 911 RSR. Francois Perrodo is a further lap back in third position for the #83 AF Corse car.