The six hours of Mexico got under way in an exciting fashion, which saw Audi take advantage of their pole position. However Porsche and Toyota are still in the hunt. 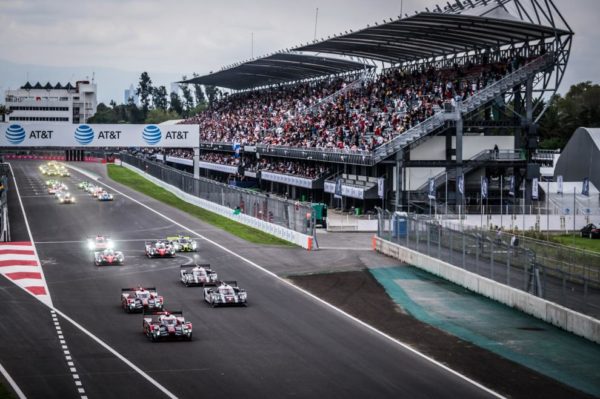 Andre Lotterer made a great start making a launch straight past the #2 Porsche , before taking advantage of the #8 Audi of Lucas di Grassi which ran wide at the first corner.

The #66 Ford was the first car to take a spin in the race on lap 2 after contact with James Calado in the #51 Ferrari. However the stewards did not deem the Ferrari driver at fault.

In LMP2, RGR Sport made hay from their class pole taking a five second lead in the first 3 laps, leaving the championship battle to unfold between the #36 Alpine and the #26 G-Drive Orecas of Gustavo Menezes and Rene Rast respectively. It took 10 minutes in to the race for Rast to make a hard thought pass on the #36 car to get into second place, and begin chasing after a hard charging Bruno Senna.

Come lap 8 the race was far from settling down, as the #8 Audi of di Grassi past Lotterer in the sister car for the lead in to turn one, before Lotterer caught the Brazilian napping in traffic a few corners later to re take the lead. All this battling allowed the Porsche pair of Brendon Hartley and Marc Lieb to close the gap. 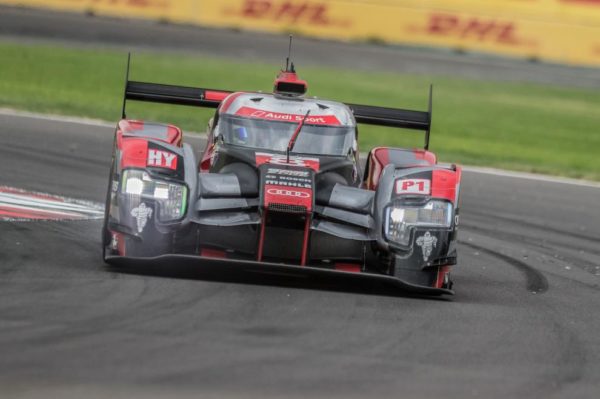 In GTE-AM the race did not get under way as Aston Martin would have hoped. They got jumped by all three AM Porsches at the start. Ben Barker led the way in the Gulf Racing car ahead of Patrick Long in the Abu-Dhabi Proton car. KCMG held third in class. Things then unraveled even more for Pedro Lamy as he sent the championship leading #83 Ferrari of Collard into a spin after making contact with the side of the car.

The long main straight then allowed di Grassi to get back past the #7 Audi into the lead.

Audi’s early race lead was soon to fall away as twenty minutes as Brendon Hartley in the #1 Porsche closed on to the back of Lotterer, who was struggling in traffic. The battle for fourth overall also hotted up when the #6 Toyota began to close on the #2 Porsche of Lieb at the same time.

With 5:30 hours on the clock Brendon Hartley made the jump on Lotterer for second place, kicking up the dirt in the process of squeezing up the inside before making the move stick under into turn 1.

Lotterer was then the first to jump into the pit lane to get new tyres on lap 25 after complaing of a lack of grip shortly after getting passed by the Porsche.

With ten minutes left in the first hour the races green flag running was interrupted with a full course yellow after Victor Shaitar hit the wall and shedding body work on the circuit, before coming to a halt in the middle of the baseball stadium.

The full course yellow induced a flurry of pit lane activity which saw the both the Porsches and Toyotas pit. The #8 Audi also pitted, however the #7 Audi did not due to Lotterer’s earlier stop. The big winner for the full course yellow was Kazuki Nakajima in the #5 Toyota, as he jumped Marc Lieb’s #2 Porsche in the pit lane, to move up to third overall behind Mark Webber in second and Lucas di Grassi in the leading Audi. 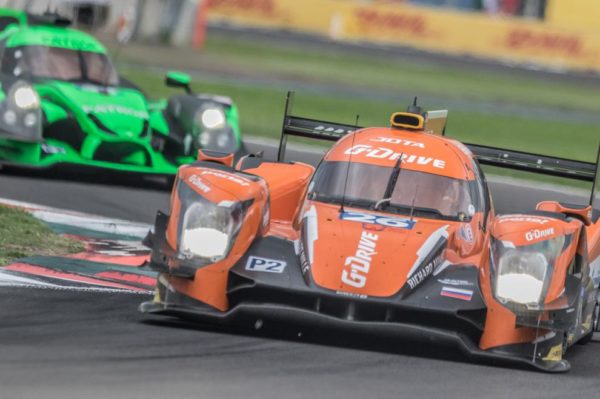 The #26 G-Drive ended the first hour leading LMP2 after a long pit stop dropped the RGR Sport car down to second in class. The #36 Alpine sat in third.

GTE-PRO was being led by the #95 and #97 Aston Martin in first and second, ahead of Harry Tincknell in the #67 Ford in third. The Abu-Dhabi Porsche led GTE-AM ahead of the KCMG Porsche and the #83 AF Corse Ferrar 458 Italia.

The race sprang into life in hour 2 as Lucas di Grassi lost the lead to Mark Webber after getting caught up in a coming together between the #31 ESM and the remaining SMP Racing BR-01. However di Grassi came back straight away with a fastest lap almost immediately. Toyota’s #5 car was next in the news as Nakajima thought hard to try and maintain his third position, but lost out to the superior speed of the Porsche of Neel Jani on the main straight.

The battle raged on between di Grassi and Webber, however traffic continued to play to the advantages of the Porsche. In the mean time the #6 Toyota was in strife as it put the already twice compromised #31 ESM Ligier JSP2 into the wall on the way into the stadium section, causing damage to the LMP2 car. 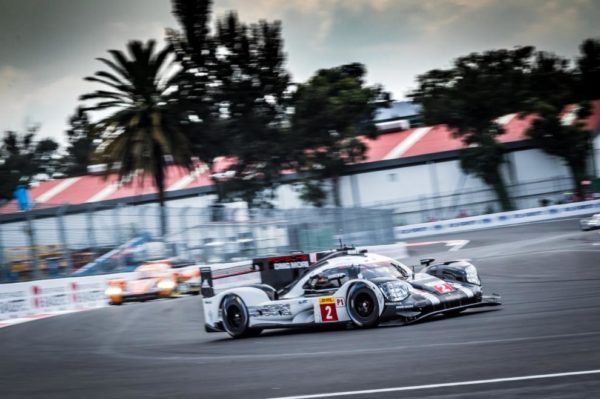 Mike Conway was deemed to be at fault for the coming together and picked up a drive through penalty for the incident. In the mean time both the #44 Manor and the #4 ByKolles made trips to the pit garages. Things also went from bad to worse for Toyota as the #5 car had a front nose change before soon being pushed back into the garage for further work. It was reported to be an issue with the hybrid system. The rear end also had damage.

with 18 minutes left in the hour Andre Lotterer bought his car into the pits right behind Conway on his penalty. The #7  car took a full service and a driver change, which saw Marcel Fassler take the wheel.

Drive though penalties seemed to turn into the order of the day at the end of the second hour when Gianmaria Bruni was called in for one of his own due to constant abuse of track limits. The #44 Manor car also picked up a drive through for refueling with the engine running.

GTE’s classes then came together as Olivier Pla lent on the #98 AM car of Paul Dalla Lana, which ultimately but the Aston Martin in the wall. The Ford driver was blamed for the incident and picked up a stop and go penalty from the stewards.

di Grassi finally made a move stick after an attempted move into turn one did not pull off, the Audi then got past before the chicane after passing on the outside. However di Grassi’s lead was short lived as both cars then dived into the pit lane, and the Porsche emerged in the lead due to their faster fuel flow.

LMP2 then kicked off again as the #26 G-Drive car hit Ricardo Gonzalez into a spin. This promoted the #36 Alpine straight up to second position and put a dampener on what had been a perfect run for Gonzalez and RGR Sport.

As the second hour ended Timo Bernhard led the way ahead of Loic Duval in the #8 car. Third was held by the #2 Porsche of Romain Dumas. LMP2 was being led by G-Drive’s #26 car ahead of the RGR Sport Ligier. The #36 Alpine went back down to third again after the stops.

GTE-PRO’s leaders were still the #95 and #97 Aston Martin’s respectively. The #67 Ford GT still held third. Abu Dhabi Proton Racing continued to lead GTE-AM ahead of the KCMG Porsche. AM championship leaders in the #83 Ferrari remained in third.

As the race settled into it’s rythem into the third hour, however Bruno Senna did have a spin the the #43 RGR Ligier.

Timo Bernhard continued to pull out a lead but at a steady pace to Loic Duval in the Audi due to traffic continuing to compromise the Audi. Drama continued to ensue for Audi as the #7 came into the pit lane, and ran out of diesel power before the car made it to the box. However, the Audi mechanics managed to push the car to the fuel rig, were a full service later, Marcel Fassler was once again on his way.

Moments later the #27 SMP hit the #30 ESM in stadium section, which once again saw the ESM car worse off, as seemed to be the theme of the race to date.

With 16 minutes remaining in the half the track was declared wet due to gathering storm clouds and spits of rain being spotted by the race director. This call was later followed by the second full course yellow of the race which was due to marshals going on track to collect gathering debris.

Porsche’s #1 car had a moment on the way into the pit lane where it bailed out of the pit in at the last possible moment, which meant crossing the red and white markings, which as the half ran out, was under investigation without a decision.

The pit lane soon filled up, however the #8 Audi gained the advantage from that round of stops. Closing right onto the tail of the leading #1 car for the re start.

The #5 Toyota however was taking no part in the action, as it’s issues were deemed to much to repair, and it was retired from the race.

At the end of the third hour The #1 Porsche held it’s reduced lead at the head of the field ahead of the hard charging #8 car. Porsche’s #2 car sat in third spot. The #36 Signatech Alpine led the LMP2 class ahead of the #26 G-Drive car. The RGR Ligier sat in third.

GTE-PRO was being led by the #95 Aston Martin ahead of the #97 as ever. Porsche’s Dempsey Proton car moved up to third. Proton Competition went two better at the half way stage in GTE-AM with the #88 car leading the class. The #83 Ferrari jumped up to third and KCMG dropped to third.

With half the race still to come, with potential rain and a penalty for the leader, the 6 Hours of Mexico delivered in the first half.