Porsche has launched its brand-new Porsche 963 prototype at the Goodwood Festival of Speed. A pair of Porsche 963s, entered by Porsche Penske Motorsport, will be competing in the FIA WEC from 2023.

The long-awaited Porsche 963 launch took place at the 2022 Goodwood Festival of Speed. Dane Cameron was responsible for piloting the new LMDh-spec racer up the famous hill. Cameron will be joined on the driver squad by fellow works pilots Kévin Estre, Michael Christensen, Laurens Vanthoor, Matt Campbell, Mathieu Jaminet and André Lotterer as well as Felipe Nasr.

The car is based on a chassis developed by Canadian firm Multimatic. It is powered by a 4.6-litre V8 Biturbo engine providing 680 hp of power. It also features standardised hybrid components from the likes of Bosch, Williams Advanced Engineering and Xtrac.

The 2023 Rolex 24 at Daytona is set to mark the official race debut of the Porsche 963. However, Porsche Penske Motorsport is also aiming for a non-competitive dress rehearsal at the final round of the FIA WEC season in Bahrain this November.

“The Porsche 963 should be homologated this autumn,” said Urs Kuratle, Director Factory Motorsport LMDh, as the Porsche 963 was launched. “Until then, we want to make further progress with test drives and gain additional insights. We can hardly wait for our first outing.”

The opportunity for customer teams to purchase and race LMDh-spec machinery was mooted as one of the main benefits of the ruleset. And Porsche has announced that it is moving forward on that commitment from 2023.

The German marque confirmed as part of the 963 launch that four additional cars had been sold for the 2023 season, with two headed for the FIA WEC and two destined for IMSA.

The first of the two WEC entries will be entered by title sponsor Hertz in partnership with current LMP2 squad JOTA, as the team confirmed this week.

The identity of the second privateer Porsche team for the 2023 WEC season is as yet unknown.

Lamborghini has announced that it will enter the Hypercar category of the FIA WEC from 2024 with a brand-new prototype car. 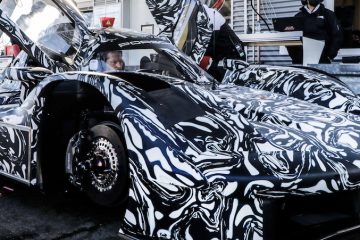 Porsche and Peugeot have lifted the lid on their much-vaunted contenders for the Hypercar class of the FIA World Endurance Championship.