Poles for Aston Martin and Toyota

Aston Martin Racing and Toyota Gazoo Racing secured the class poles in qualifying for the Six Hours of Fuji. In LMP2, DragonSpeed will start the six-hour race from class pole while the Dempsey-Proton Racing Porsche was fastest in GTE Am.

Toyota Gazoo Racing continued their perfect weekend at their home race in Japan by locking out the front row of the grid once again in LMP1. The #7 TS050 was quicker than the championship-leading #8 machine, however a pit-lane speed lane infraction by José María Lopez saw the pole-sitting car have its times scratched from the records. It will begin the race from the back of the grid.

Pole was therefore handed to the #8 car of Fernando Alonso, Kazuki Nakajima and Sébastien Buemi, with the #1 Rebellion Racing machine of Senna/Lotterer/Jani promoted from row two to row one. Third on the grid is the sister Rebellion car of Thomas Laurent, Mathias Beche and Gustavo Menezes.

Pole in the LMP2 class went to Roberto Gonzalez, Pastor Maldonado and Anthony Davidson in the DragonSpeed Oreca. The #31 set a fastest average lap time of 1:28.906, 0.297 seconds quicker than the pair of Jackie Chan DC Racing prototypes, who will start tomorrow’s race in second and third on the grid.

The GTE Pro was just as closely matched as it had been in free practice, with just one second separating the pole-sitting #95 Aston Martin Vantage of Nicki Thiim and Marco Sørensen and the tenth-fastest #92 Porsche 911 SR of Michael Christensen and Kévin Estre. The #95 car was less than two tenths faster than the second-fastest #82 BMW M8 of Tom Blomqvist and Antonio Felix da Costa. Third place in qualifying went to the sister #97 Aston Martin of Alex Lynn and Maxime Martin.

The battle for pole was just as tight in the GTE Am, with the top six again covered by less than a second. Pole position went to Dempsey-Proton Racing for the #88 Porsche 911 RSR. Aston Martin also showed their potential in the Am class, finishing second-fastest on average lap time just 0.064 seconds short of pole. Japanese team MR Racing will start their home race from the back of the GTE Am field

All lap times and a full list of the starting positions for the Six Hours of Fuji are available by clicking on the links below:

There were few surprises in the final qualifying session of 2021 as teams geared up for the 2021 8 Hours of Bahrain. 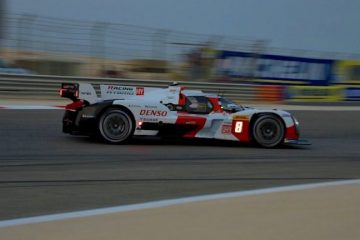 Toyota on pole for first of Bahrain double-header