Interview: Fernando Rees on the Nurburgring 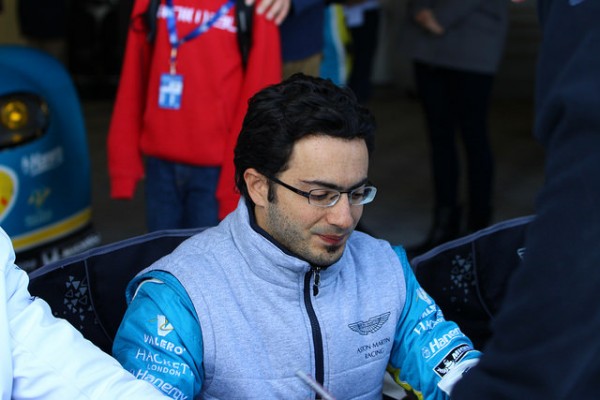 We caught up with GTE-PRO race winner Fernando Rees ahead of the WEC’s trip to Germany.

The next race is the 6 hours of Nürburgring. What memories do you have of the German track?I’ve only been there once, in the Le Mans Series back in 2008. So of all the WEC circuits, it’s the only one I’m not well experienced. I don’t think it matters much, though. But it’s a fun circuit, and the atmosphere with the German fans is great – they’re very knowledgeable about endurance racing, and they really enjoy this kind of racing. So it will be a great event. I’m glad F1 is not in Germany this year, so this way we can profit the most from the passion of the German fans – they deserve good racing!Which part of the GP-Circuit do you like most?I love the uphill section after the Dunlop Curve. On single seaters and prototypes it’s an easy section, but on GTs it’s a nice challenge.The race in Germany is a replacement for Brazil. Do you think the Nürburgring should become a fixed part of the WEC calendar? (9th race)I’m not sure that it will. My understanding is that it was a good solution for filling the gap left by Interlagos. But in theory, it’s a World Championship and we already have the initial three rounds in Europe, so perhaps a new round will appear replacing Nurburgring, something outside Europe.Your teammate Richie Stanaway started on the Nordschleife this year. Will you start there in near future too? Maybe in VLN-Series or at the 24 hours of Nürburgring?I’m not sure, and probably not. To be honest, I understand the challenge aspect of it, and it is a historical race course, but I don’t think it is suited for the kinds of cars that driving there nowadays – not given the current standards of safety in motorsports.What are your impressions of the few testing days at the Nürburgring? Do you think Aston Martin is able to win the race?It’s impossible to know. We know what we were testing, but we have no idea what the others were doing. However, given the circuit characteristics, I believe we’ll be competitive there. We better be, as we again need to work to catch up the Ferraris.Imagine you are fighting at the forthcoming race against Stefan Mücke in the final minutes for the lead in GTE-Pro. Would you let your German teammate win at his first wec-home race or would you fight untill the last second?Oh, there is no such thing as letting anyone win. Never. We would fight hardly but fairly, and the best of the day would win in the end. I’m sure he would do the same if we were at Interlagos.Apart of the Nürburgring, what are your first thoughts when you talk about Germany?I’m a true admirer of Germany and of the German people. I believe it’s a wonderful country, built and rebuilt by a great people who also have great pride in being German. I have always been well-received in Germany, and it’s a great honor to race there this year. However, the language is pretty difficult for me. I wish I could understand it better. But life is long, there’s time to learn it.Which German traditions are rather strange for you and which of them do you really like?There’s one which fits both sides, being strange and nice at the same time: Oktoberfest. We do have our version of it in Southern Brazil, where we have a huge German population. I believe it’s a crazy party, where sometimes things go over the limit, but it’s nice at the same time to witness that bunch of people having a good time together.Do you have a favorite place or town in Germany that you like most?I like Berlin a lot. It’s a beautiful city, both old parts and the rebuilt parts. To imagine the amount of pain and destruction it suffered, and to see it today beautiful the way it is, it’s impressive. I love the ruins of Kaiser Wilhelm Church, it tells a story of rebirth.After a good first half-season you are in fifth place in drivers championship. What is the plan for the second half?We have been through ups and downs since the beginning of the season. Not what we expected at Silverstone; then a good result at Spa; and then everything for an excellent result at Le Mans, but ending with a disappointing position. So we have five races ahead, which we will do our very best to replicate the successes of Spa.