The penultimate round in the 2016 FIA World Endurance Championship got underway this morning with Porsche on pole position. With the championship still up for grabs and Audi looking to prove a point in their final two races in LMP1, the 6 Hours of Shanghai was looking set to be a classic. 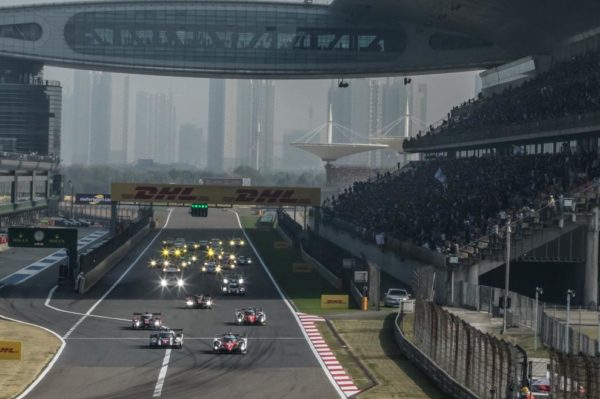 The Porsche of Brendon Hartley led the pack away but it was to be Sebastian Buemi who went with him and swept around the German car into turn one, snatching the lead. Mike Conway put his #6 Toyota in all the right places to follow his team mate though, however despite going all the way around turn 1 and getting the inside for turn 2, Hartley managed to hold the position. This then allowed Lucas di Grassi in the #8 Audi to take advantage and nip up into third.

Although Turn 1 passed contact free for LMP1, that was not the case for LMP2 and GTE-PRO. The #45 Manor went wide and span back in front of the pack, collecting the innocent #97 Aston Martin of Richie Stanaway, taking the LMP2 car out of the race. By the time the saftey car came out at the end of the lap to retrieve the LMP2 car, Hartley had taken his position at the front back.

Hartley made a much better re start, as did di Grassi in the Audi, who got passed Buemi for second before turn 1. The battling continued further down the back, where the #7 Audi of Lotterer ran out of boost coming out of the final corner which allowed the championship battling #6 Toyota and #2 Porsche though to fourth and fifth positions.

In the mean time the lead had changed hands in LMP2. The Signatech Alpine of Nicolas Lapierre took the lead from the #44 Manor British driver Alex Lynn at the wheel, in the first ten minutes. Alex Brundle also made progress in the #26 G-Drive Oreca, overtaking Tom Blomqvist for third in class Brundle continued his blistering pace to catch and pass the pole sitting #44 Manor of Lynn which moved the Russian team up to second place, before passing Lapierre for the lead down the back straight. 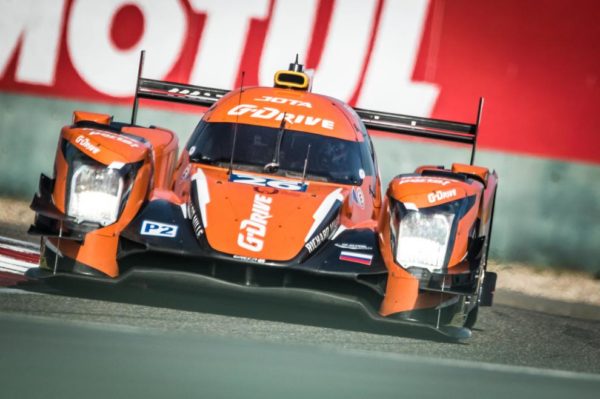 There was close racing in GTE as well. Second place was up for grabs in both AM and PRO. Stefan Mucke was looking for a way back past the Ferrari 488 of Bruni, as well as Emmanuel Collard who was trying to get ahead of the KCMG Porsche being driven by Wolf Henzler. It took the Frenchman a few laps of sizing up the Porsche to make the move, however, the Ferrari did make it’s way up into second place. Patrick Long also made his way past at the same place a lap later to move the KCMG Porsche from second to fourth. This also made it three different cars at the head of GTE-AM, with Aston Martin leading from Ferrari and Porsche.

LMP1 was back at the head of the action as the #2 Porsche with Neel Jani at the wheel made his way up into third place after passing Buemi, who was complaining about a lack of traction in his TS050. There were no such problems for Conway in the sister Toyota which also got past Buemi for fourth. All the time Andre Lotterer was looking quick behind the Toyota duo.

The move that was looking on the cards in GTE-PRO between Mucke’s Ford and Bruni’s Ferrari was the next to pull off. Mucke put his ford on the outside of the Italian’s Ferrari going into the final corner, but had enough grip to sweep around the outside snatching the position. 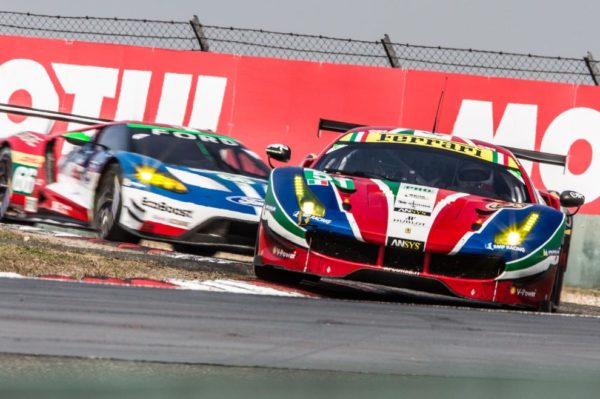 The Hunter became the hunted meanwhile in GTE-AM. Although Collard had just made his way up to second in class, Patrick Long was on a charge and putting the AF Corse prepared car under increasing pressure.

The first round of stops started at the 53 minute mark and it was Audi who were first to blink, bringing the di Grassi in from second place. The were followed a lap later by the championship leading Porsche #2, Audi #7 and the #5 Toyota, which saw Anthony Davidson take over. Last to pit were the #1 Porsche from the lead and the #6 Toyota

At the end of the first hour Hartley continued to lead in the #1 Porsche ahead of di Grassi in the #8 Audi. Neel Jani however was following the Audi closely in third, searching for a Porsche 1-2. Fourth and fifth belonged to the #6 and #5 Toyotas respictivley. Andre Lotterer was last of the Hybrid cars for Audi. Rebellion Racing led the Privateer class ahead of the troubled ByKolles.

The LMP2 lead was that of Alex Brundle’s in LMP2. The G-Drive team were ahead of the championship leading Signatech Alpine. Antonio Giovinazzi made up the top three. The pole sitting #44 Manor had slipped to fourth. The top five was rounded out by the RGR Sport car, which had spent most of the first hour stuck behind the SMP Racing BR-01 of Mikhail Aleshin.

Ford maintained their GTE-PRO positions from the start. Harry Tincknell still led after leading the pack away from pole in the #67 GT, Olivier Pla held second in the sister car. James Calado was best of the rest on the AF Corse Ferrari 488. 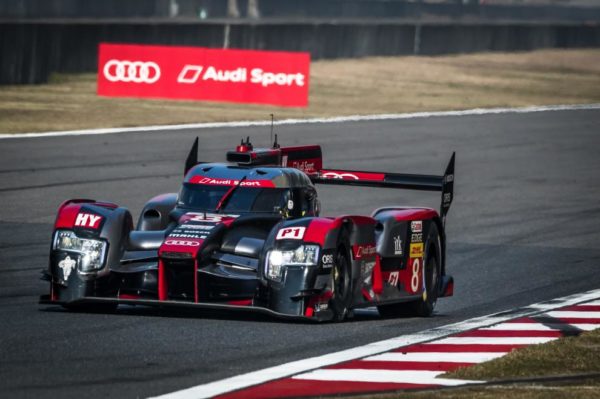 The second hour saw the race begin to settle into it’s rhythm, however it was bad news for Audi. News filleted though that a fuel rig problem for the second place #8 car. This meant that is did not have a full tank after the first round of stops, and had to come in half an hour later to re-fuel, with the team still unsure if the problem had been fixed.

Audi’s extra stop saw #8 car, now with Loic Duval at the wheel, drop to sixth and last out of the LMP1 Hybrid runners, as well as Porsche get their 1-2, with Hartley continuing to lead Neel Jani. Stephane Sarrazin was promoted to third in the #6 Toyota.

The next round of stops soon came around and there was need for a nose change on the leading Porsche. A large chunk of rubber debris from one of the tyres hit the front of the 919 Hybrid causing damage to the nose, which needed to be changed at the stop, however it only cost the team 12 seconds, and they managed to send Timo Bernhard out in the lead of the race. 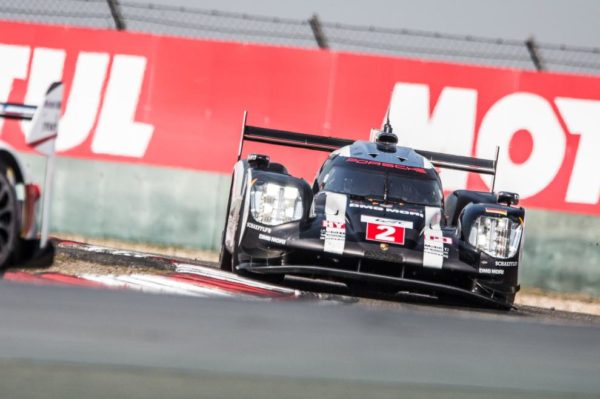 Porsche had their 1-2 with the #1 car leading the #2 car at the end of the second hour. An out of sequence Audi being driven by Loic Duval held third ahead of the #6 and #5 Toyotas in fourth and fifth position. The #7 Audi R18 e-tron quattro, now with Benoit Treluyer at the wheel, continued to struggle in sixth. An issue for the #13 Rebellion meant the lead changed hands in the privateer LMP1 class in favor of the ByKolles team.

In LMP2 a shorter pit stop by the #30 Extreme Speed Motorsports team saw the lead change hands, dropping the G-Drive Oreca down to second place, and the gap at 10 seconds. Signatech Alpine’s #36 championship leading car had Gustavo Menezes in control holding third.

GTE-PRO still saw the #67 Ford lead the #66 Ford. Marco Sorensen was in third place for Aston Martin narrowley ahead of the #51 Ferrari of Bruni. Aston Martin continued to lead GTE-AM ahead of the #88 Proton Porsche in second, and the #78 KCMG third in class.

Audi stopped early in the third hour with their troubled #8 car, which had been suffering from a re-fueling issue. The Problem was far from fixed as Duval’s stop was 30 seconds longer than it should have been. This issue really putting pay to Audi’s championship efforts, with the #2 Porsche having a strong run.

There was drama at the back of the circuit on the long straight as the racing line began to thin due to tyre debris at the side of the circuit. This caused contact between one of the SMP cars and the Larbre Copetition Corvette, as the Russian car was trying to spend as little time as possible on the dirty side of the track.

Gianmaria Bruni managed to re-claim his third place after a fantastic move around the outside of turn 1, which earned the Italian the inside line on Sorensen into turn 2.

In the mean time Toyota turned up the pressure on Porsche’s lead cars, with the #6 car getting right up behind the #2 to form a battle for second place. All the time the #5 Toyota Kazuki Nakajima closing on the pair of them. 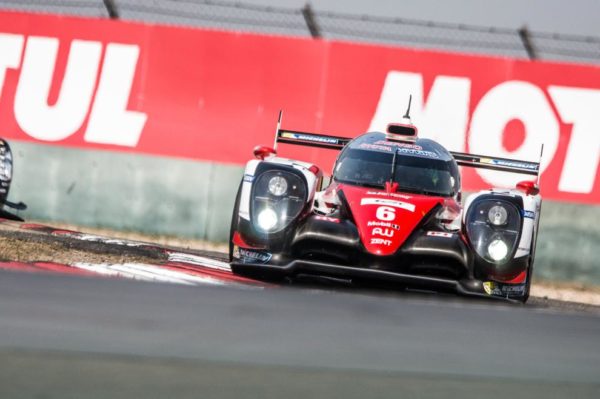 Kobayashi went for the move in a late lunge into the final corner, and pulled it off in dramatic style, however then ran out of hybrid energy going onto the straight, which allowed Marc Lieb to re-pass the Toyota. As they made their way down to the hairpin at turn four the  Japanese driver launched back up the inside to re take the position. Both Lieb and Kobayashi went either side of an SMP LMP2 car on the exit however the Toyota held the line and the position.

The battle however was not over. Lieb then once again took advantage of the Toyota’s over hybrid usage to take the place back down the pit straight once more. This time, Kobayashi was more patient and waited until the hairpin at the end of the back straight to make the move, which finally stuck. The Toyota had enough boost left to carry it over the line which left Lieb with no answer for the all Japanese effort.

All at the same time Gustavo Menezes went for a spin thanks to turn 1 contact with Bruno Senna. The move was not for position and therefore picked up a drive though penalty for the coming together.

Ford’s perfect day came to an end for the #66 second place car went off at turn 1 with a slow puncture. This forced the American team to take an out of sequence stop, dropping that car to fourth in the GTE-PRO class.

At the half way stage Timo Bernhard led the race with the #1 Porsche 919 Hybrid. Second place was half a minute back in the shape of the #6 Toyota TS050 Hybrid. The #6 was the meat in the Porsche sandwich as the #2 car held third position. Six seconds back from the #2 Porsche was a charging Sebastian Buemi in fourth. Audi sitting in fifth with the #7 car of Lotterer, Treluyer and Fassler, and sixth with the stuggling #8 R-18 e-tron quattro. ByKolles continued to lead in the privateer class due to Rebellion’s earlier issues.

In LMP2 G-Drive Racing led the way ahead of the #30 KFC sponsored ESM Ligier. Third place belonged to the #36 Signatech Alpine, despite it’s earlier spin.

GTE-PRO still had the #67 Ford of Andy priaulx and Harry Tincknell in the lead however second place was now that of the #51 AF Corse Ferrari. Aston Martin held third position in the #95 V8 Vantage, which continued tohave Marco Sorensen behind the wheel.

GTE-AM continued to have Aston Martin lead. Mathias Lauda had the controls of the leading #98 car. Joel Camathias was second in class for KCMG in their Porsche. Rui Aguas held third for AF Corse Ferrari in the #83 car.