Toyota secured victory at the 2022 24 Hours of Le Mans in blistering heat at the Circuit de la Sarthe. The win for Sébastien Buemi, Brendon Hartley and Ryo Hirakawa marks the Japanese manufacturer’s fifth in succession at the famous race.

The race began in bright sunshine and ambient temperatures as high as 28°C at the Circuit de la Sarthe. Crowds at least close to normal capacity returned once again after two years of pandemic-related restrictions.

Buemi won his fourth vingt-quatre heures, Hartley his third and Ryo Hirakawa – making his debut in the top class here – became the fifth Japanese driver to win the endurance classic.

Toyota entered the race as hot favourites, with the Japanese manufacturer fielding the sole hybrid-powered works entries in the Hypercar class. And they certainly lived up to that tag in the first half of the race.

It quickly became clear that the GR010 Hybrids enjoyed a relatively comfortable pace advantage over the other Hypercar contenders: Glickenhaus and Alpine. For the most part the Toyotas were able to lap the 13.626-kilometre circuit around half a second to one second quicker than the competition.

Over the course of Saturday afternoon, Toyota slowly built up an advantage of several minutes. The only hope for the non-hybrid runners was for a flawless 24 hours – something that neither Alpine nor Glickenhaus managed to achieve.

Issues for the other cars meant that Toyota were able to manage the race at the front of the field. In fact, for much of the first half, the two cars were running within a couple of seconds of each other. If the second-placed driver was quicker, he was given permission to overtake and attempt to build a gap.

As a result, both the #7 and the #8 led the race for extended periods during Saturday afternoon and evening. A key stint by Brendon Hartley in the #8 car then extended the gap to around 30 seconds in the early hours of Sunday.

Sunday morning then saw the challenge from the #7 Toyota fade as similar issues that affected the car in Spa recurred at Le Mans. Driver José María López came to a brief standstill at the exit of Arnage and appeared to complete a power cycle before getting going again. The Argentine was then forced to pit and complete another power cycle as the team waited for his car to ground itself safely before refilling with fuel.

“It was really special taking the victory and seeing the 1,800 marshals on the track,” said Brendon Hartley after the race. “This one feels like my first victory here. The second win, when there were no spectators, felt strange, so this one really went back to how it felt the first time.”

The pair of Glickenhaus 007 LMHs were able to stay in touch with the Toyotas but knew that any sort of issue or problem would cost them dearly. A sensor issue on the #709 car resulted in an early pit stop and some time lost.

The #708 was running comfortably in third position when Olivier Pla span at Tertre Rouge shortly before midnight, stopped briefly on the track and then resumed. Later on Sunday, the #708 was once again in the wars, losing three laps in the pits due to repair work.

Weekend to forget for Alpine

Exhaust problems were the first issue to plague Alpine’s day. The car was brought into the garage and lost some time as a result. Then, after a routine pit stop, a broken clutch required further repairs.

Multiple penalties due to slow zone speeding and crossing the pit lane exit line only made Alpine’s day worse. On Sunday, an accident in the Porsche Curves for Mathieu Vaxiviere cost the team yet more time and made for a disappointing final appearance of a LMP1 car at the 24 Hours of Le Mans.

LMP2 race over for some in the first 200 metres

What was set up to be a classic LMP2 battle was over almost before it began as a number of major favourites for victory made contact almost immediately after the green flag. Realteam by WRT suffered bodywork damage and was forced to pit, losing a lap in the process. The #22 United Autosports car ended up in the gravel trap, and the sister WRT car (#31) also lost time.

The incident left the #38 JOTA and the #9 Prema Orlen Team car to fight it out for the lead, although the #38 machine made short work of the battle. In an absolutely flawless display, Will Stevens, António Félix da Costa and Roberto González brought their Oreca 07 – Gibson home for JOTA’s first win at Le Mans since 2014.

The victory made up somewhat for the disappointment of 2021, when the same squad took pole but could only finish second, and 2020, which saw the #38 score another second-place finish.

Second was the #9 Prema Orlen Team Oreca of Robert Kubica, Louis Deletraz and Lorenzo Colombo – somewhat atoning for Kubica and Deletraz’s last-lap heartbreak when racing for WRT in 2021.

The final step on the podium went to the #28 JOTA of Rasmussen/Jones/Aberdein. Reigning champions WRT had a weekend to forget, with two cars involved in a first-lap accident and the championship-leading #31 machine retiring after an accident on Sunday morning. 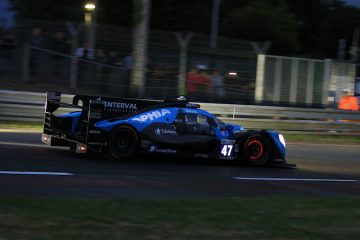 The highlight of the FIA World Endurance Championship is once again upon us. All eyes will be on the Circuit de la Sarthe in Western France as 62 cars compete across four classes for glory Read more…