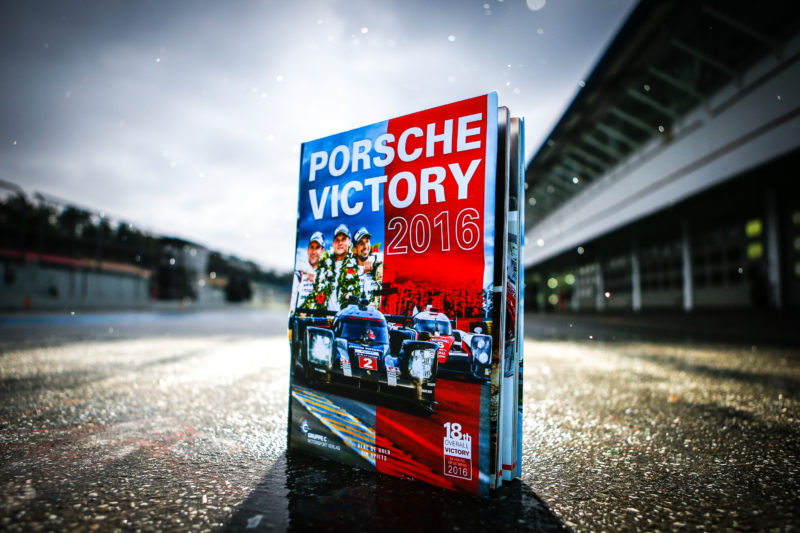 Books are popular gifts for friends and family at Christmas time. When it comes to motorsport books, it’s often hard to wade through the vast range of titles on offer to find something suitable. “Porsche Victory 2016”, published in November by Gruppe C Verlag, may just be the perfect present for that motorsport-mad member of the family. Reprising last year’s first edition of Porsche’s success at the 24 Hours of Le Mans, René de Boer and Tim Upietz take a closer look at Porsche’s extraordinary 18th victory at the Circuit de la Sarthe. We took a closer look to see if this latest offering is worth putting on your Christmas wish list.

The first time you pick up the book, it’s clear that de Boer and Upietz have left now stone unturned in their quest to document Porsche’s 2016 Le Mans success. Weighing in at 192 pages, with countless colour photos, Porsche Victory 2016 is the perfect coffee table book or as a reference of the 2016 race. A foreword by six-times Le Mans winner Jacky Ickx provides an emotional introduction to this edition.

This is followed by a series of stunning photographs and comprehensive text in German, English and French, documenting the start of the FIA WEC season at Circuit Paul Ricard right through to Le Mans victory. The book is also full of technical details on the Porsche cars, as well as in-depth research on the teams of drivers.

For Le Mans itself, full-page images and facts and figures from the race provide a suitable backdrop to the race text and are sure to get Le Mans fans’ pulses racing with memories of the 2016 event. The undoubted highlight of the book is the extensive race report, with almost every minute of the race meticulously documented by de Boer and Upietz in all three languages. The book concludes in impressive fashion, too, with all three winning drivers providing their own insight into their winning performance in three double-page features.

In summary, Porsche Victory 2016 is the perfect gift for any fan of the Porsche marque. It offers an in-depth look at the moments that mattered in the run-up to, during and after the world’s most famous race. If you are looking for a definitive story of the 2016 race, look no further.

Porsche Victory 2016 is available now from the Gruppe C Verlag store, priced at €40.00