There’s barely anyone in the paddock who knows GT and GTE racing as well as Ben Keating. The US driver has experience in a variety of GT machinery and has become a firm fixture of the WEC scene. At the season finale in Bahrain we got the opportunity to speak to him about the changes in the GTE class in the WEC.

WEC-Magazin: How did you become involved with TF Sport?

Ben Keating: Tom Ferrier’s TF Sport team have been successfully running in the WEC for quite a while now and have made quite a name for themselves. They were leading the championship coming into this race last year, and we were second coming into the final race this year, so clearly it’s a great team. That’s why I am with them.

WEC-Magazin: You won here at the 6 Hours of Bahrain the weekend before, did that give the team more motivation for the final race of the season?

Historically the Aston Martin has always been good in Bahrain. They were on the front row here last year, but the final race of the season was extremely different to the 6 Hours the week before. The lower temperatures give the other teams an advantage on pace and there has also been some trickery on balance of performance, which has been frustrating.

WEC-Magazin: What’s your opinion on the current situation in GTE?

It’s a complicated situation. In Bahrain, for example, the balance of performance means that the Porsches are quicker in the night-time running because they can run their soft tyres. So it’s very difficult for us to keep pace with them. It’s also difficult because the balance of performance is adjusted with the Pro cars in mind, and Aston Martins are only running in the Am class. It feels like we have been forgotten somewhat.

WEC-Magazin: How will the departure of the Aston Martin works team affect you?

Well it was a shame to see them leave, but with the new GTE class on the way it was hard to justify the continued investment I imagine. Right now it would be great if they were running a GTE Pro car and were slow so that we could get to beneficial BoP adjustments, just like the Ferraris have done! To be honest, everyone is now looking to GT3 and, if I were them, that’s where I would be investing my money. 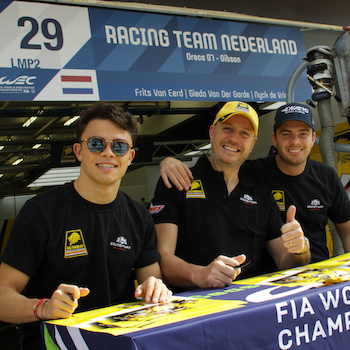 Catching up with Racing Team Nederland

Racing Team Nederland is practically the national team for oranje fans. Our Dutch photographer Ton got the chance to catch up with the team.