British driver Ben Barker is the latest a new crop of young drivers showing off their considerable talent in GTE racing and one-make GT series. Two very recent graduates, Earl Bamber and Nick Tandy, went on to win Le Mans last year. This season marks Barker’s debut in the WEC in a Gulf Racing Porsche 911 RSR alongside Adam Carroll and Mike Wainwright – and therefore also his debut at the 24 Hours of Le Mans. WEC-Magazin caught up with the young Briton in the run-up to the famous race. 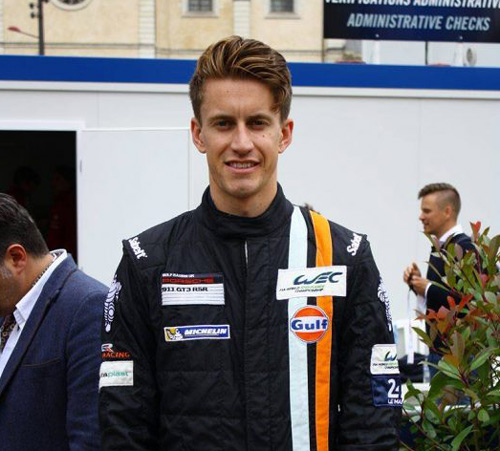 Ben Barker has had a busy year so far, with two races under his belt in both the World Endurance Championship for Gulf Racing and in the Porsche Supercup for MOMO-Megatron Team Partrax, as well as plenty of driver training commitments. Nevertheless, he feels upbeat and well prepared for his debut in the 24 Hours.

You’ve obviously raced at Le Mans before, most notably winning the combined Porsche Carrera Cup race here in 2014, but this is your first time at the 24 Hours. How have you been preparing for the race, both physically and mentally?

“I am very busy coaching people and also driving in Porsche Supercup, as well as the WEC testing and first two rounds. So driving a race car is the ultimate training. When I am home in London I try to fit an 8 – 10k run in here and there, that seems to keep me ticking.”

Do you feel confident going into the race?

“Yes, I think it’s key to feel positive and confident with the car and circuit. To be confident about the result is a little far fetched at a 24hr event. As a driver you have to do the best most efficient and cleanest job you can as well as good team preparation and ultimately the result will work itself out.

You’re driving with for Gulf Racing with Adam Carroll and Mike Wainwright this season, what’s the atmosphere like in the team?

“The atmosphere is one of the best I have experienced. In endurance racing particularly, it is so important that you gel as a team, it’s not a one player game. All the guys and girls get on like a family and we can be open honest and to the point about everything. Transparent communication is essential.”

How have you found the transition from the Carrera Cup car to the 911 RSR GTE machine?

“Absolutely fine. The Cup car is the perfect training tool for any GT3/GTE car. They always say that it is the best school for driver technique. After all, there is a reason why nearly all the top Porsche factory guys came through Supercup.”

What’s the strategy for Le Mans? Are you confident that the Porsche will have the pace over the long runs compared to the Astons, Ferraris and the Corvettes?

“I couldn’t possibly say! Yes there is a plan but I don’t think any team can ever religiously stick to that plan in a 24hr race. From what we learned at the test, the Porsche looks competitive enough but ultimately may not be the fastest brand due to the BOP. We are confident nevertheless.”

What would be the ultimate aim for the team at Le Mans? Getting to the finish to maximise championship points or going for the win?

“We always strive for the best possible result, but there is no need to take unnecessary risk for the result to be either one place higher or a non-finish.”

What are your ambitions moving forward? Would you like to progress into prototype machinery or stay with GT racing?

I would love the chance to showcase myself in a prototype, I am very fond of aero grip and that style. But on the other hand GTs are producing a career for me and I have some momentum in this format of racing.