Audi lead at the halfway stage 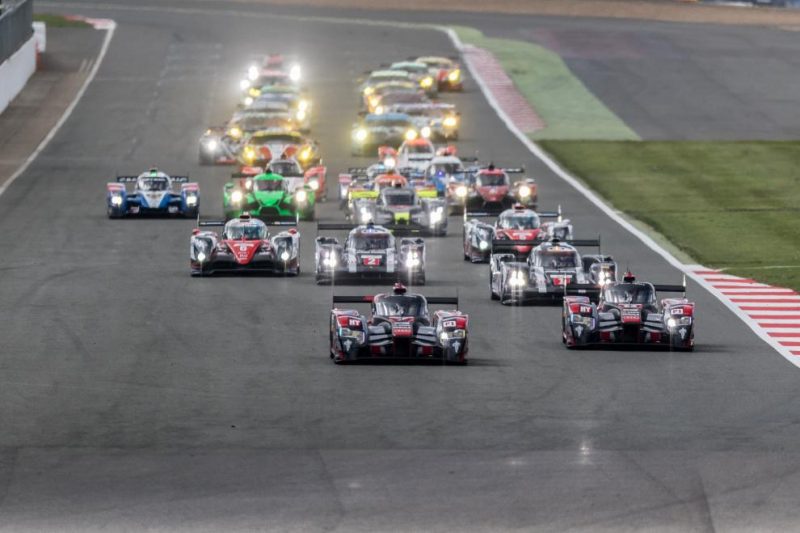 The pole-sitting #7 Audi R18 of André Lotterer, Benoit Tréyuler and Marcel Fässler leads after three hours of the 6 Hours of Silverstone, but that only tells part of the story in an incident-packed race. The erstwhile leader, the #1 Porsche of Hartley/Webber/Bernhard, is out of the race after a serious incident with the #86 Gulf Racing Porsche. Audi have also lost one of their cars, with the #8 R18 of di Grassi/Jarvis/Duval stopping on track with hybrid issues.

The first round of the 2016 World Endurance Championship got off to a frenetic start, with the #7 Audi R18 of André Lotterer leading off the field in overcast but dry conditions. The race quickly settled down to a rhythm, with the Porsches already matching and then bettering the fastest lap of 1:40.8 recorded in the 2015 race.

Mark Webber consistently proved to be the quickest man in the field, catching and passing the #8 Audi and then #7 Audi on lap 16 of the race. The #2 machine also showed impressive pace, slotting in to second position after some side-to-side action with Oliver Jarvis in the #8 Audi.

The #8 car became the first LMP1 to pit on lap 24, quickly followed by the rest of the competition on laps 25 and 26. The Porsche team managed to service their cars more quickly, reinforcing their 30-second lead at the head of the field.

The rapid but calm pace of the race was interrupted violently on lap 70. The race-leading #1 Porsche of Brendon Hartley attempted to lap the #86 Gulf Racing Porsche 911 of Mike Wainwright around the outside of turn 2 but ran out of tarmac and made contact with the GTE Am machine. The impact lifted the Porsche hybrid into the air and sent both cars careering into the gravel trap. The pair were instantly eliminated, but the two drivers exited their respective cars without assistance.

The drama didn’t end there, either. Under the subsequent full-course yellow to recover the two Porsches, the #8 Audi R18 of Lucas di Grassi stopped out on track with power unit issues. Oliver Jarvis had complained of his hybrid boost failing in a previous stint, and the car appeared to give up the ghost completely under FCY conditions. Despite di Grassi’s valiant attempts to revive the ailing Audi, lap 71 marked the end of the race for the #8 crew. The #2 Porsche also had its travails, with the Porsche team changing the front nose section when the car pitted under FCY. 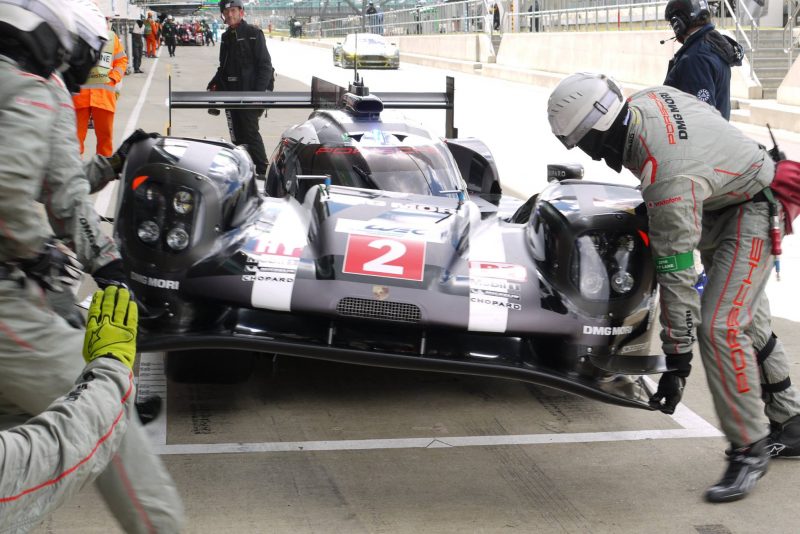 As the race returned to green, the #2 Porsche of Marc Lieb was leading the field with the #7 Audi of Benoit Tréyuler just two seconds behind. The two prototypes resumed the battle for the lead almost immediately, with Tréyuler slipping past Lieb coming out of Copse on lap 75. Tréyuler maintained his lead under green-flag conditions and leads at the three-hour point by a handful of seconds.

That’s how things stayed for the majority of the first couple of hours, with the #43 RGR Sport by Morand of Bruno Senna and then Ricardo Gonzalez also in the mix for the top positions. An as-of-yet unexplained issue for the #26 car of René Rast as the race returned to green, with the Oreca 05 stopping on driver’s left on the entry to Maggotts, saw the Strakka of Danny Watts take the lead on lap 75. But Rast was quickly back to speed, catching and then passing the Strakka machine for the lead on lap 89.

GTE Pro has been relatively straightforward in comparison, with the #71 AF Corse Ferrari 488 of Sam Bird and Davide Rigon holding a comfortable lead of roughly one minute over the #95 Aston Martin Racing car of Marco Sorensen, Darren Turner and Nicky Thiim. The #66 Ford Chip Ganassi Team UK entry of Billy Johnson, Stefan Mücke and Olivier Pla holds an impressive third position with three hours of the race remaining.

The #83 AF Corse Ferrari 458 Italia of Collard/Perrodo/Aguas leads GTE Am at the three-hour point, but owes the rest of the field a pit stop. In second position is the #78 KCMG Porsche 911 RSR is in second while the #88 Abu Dhabi-Proton Racing Porsche is in third.