Audi fastest in FP1 at Fuji 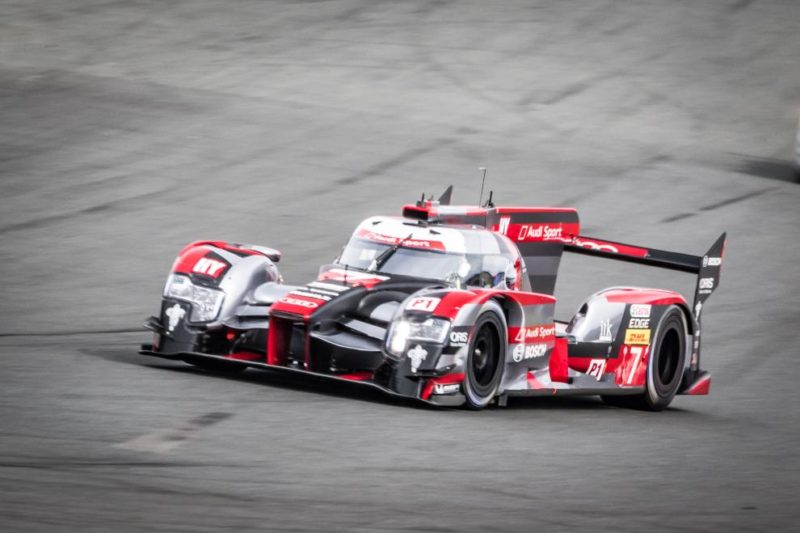 The #7 Audi R18 of Marcel Fässler, André Lotterer and Benoit Tréluyer finished top of the time sheets in the first practice session for Sunday’s 6 Hours of Fuji. Fässler was the quickest man in the morning session, posting a fastest lap of 1:25.030 in dry but cool conditions at the Japanese track. The #6 Toyota TS050 Hybrid of Conway/Kobayashi/Sarrazin finished second in the 90-minute second, with Kobayashi around half a second down on Fässler’s benchmark.

The fastest Porsche could only manage a 1:25.962 in the hands of Swiss Neel Jani, which put the #2 car in fifth position overall. In LMP1-L, the #13 Rebellion Racing machine held a slight advantage over the #4 ByKolles Racing Team car of roughly six tenth of a second.

G-Drive Racing took the honours in LMP2, after Alex Brundle went quickest with a 1:33.204 on lap 16 of his 18-lap run. The #31 Extreme Speed Motorsport Ligier JS P2 ended up in second position just two tenths of a second further back. Strakka Racing, reduced to two drivers this weekend due to Nick Leventis suffering from a lung infection, rounded off the top three.

First blood in GTE Pro went to the #67 Ford GT crew of Andy Priaulx and Harry Tincknell. Priaulx was the quickest man of the session, posting a 1:39.216 – but his teammate’s fastest time was just 0.032 seconds slower. The #77 Dempsey Proton Racing showed encouraging pace after a disappointing season so far, finishing second on the time sheets. Ferrari held the upper hand over Aston Martin in the fight for championship honours, with both AF Corse machines finishing ahead of the Aston Martins. Aston hold a six-point lead in the manufacturers’ title going into the final three rounds.

Championship leaders AF Corse will be looking to cement their advantage in Japan, and the #83 car got off to a great start by finishing first in the GTE Am standings in FP1. Experienced Frenchman Emmanuel Collard was the fastest man on the circuit with a 1:40.775. The #98 Aston Martin Racing Vantage V8 was second and the #50 Larbre Competition Corvette C7.R third.