All change in the drivers’ championships 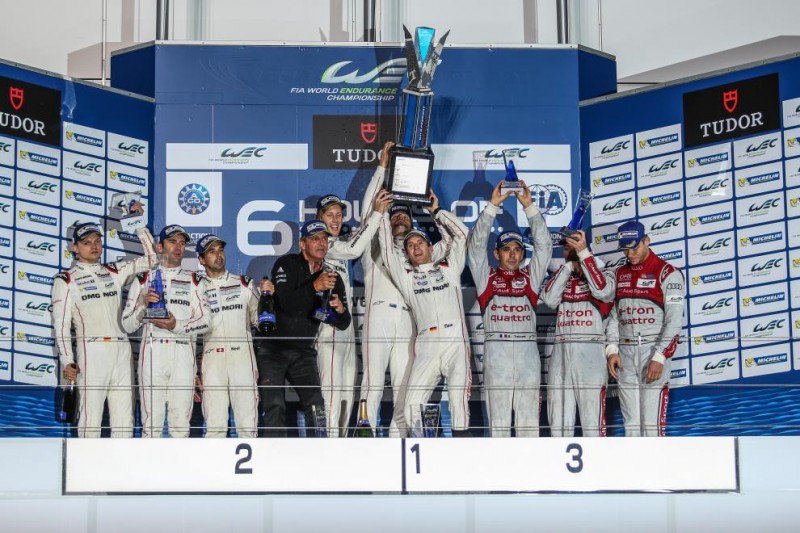 The 6 Hours of Fuji saw some key changes in the championship standings, with the orders of both the FIA World Endurance Drivers’ Championship and the FIA Endurance Trophy for LMP2 Drivers being shuffled.

Victory overall at Fuji has pushed the #17 Porsche trio of Timo Bernhard, Brendon Hartley and Mark Webber ahead of the Audi drivers André Lotterer, Benoit Tréluyer and Marcel Fässler by just a single point. The #18 crew is further adrift and trails the #7 Audi drivers by 32.5 points, hence the team orders to allow the #17 car to pass at the end of the weekend’s race.

Mathias Beche and Nicolas Prost cemented their lead in the LMP1 privateer drivers’ championship with class victory at Fuji. Pierre Kaffer and Simon Trummer continue to close the gap on the Rebellion drivers, but will need the Rebellion cars to fail to finish in one or both of the final two rounds if they are to be in with a shout of championship honours.

It’s all change in the LMP2 drivers’ title, too, with the DNF for the #47 KCMG car putting a serious dent in Richard Bradley and Matt Howson’s championship hopes. The #26 G-Drive Racing team now lead by 12 points. With two races left in the season and a maximum of 52 points available, anything can happen in the championship.

The GT drivers’ championship is also finely poised, Ferrari drivers James Calado, Davide Rigon, Gianmaria Bruni and Toni Vilander closing in on Richard Lietz at the top of the standings thanks to a resurgent performance in Japan.

The SMP Racing trio of Alexei Basov, Andrea Bertolini and Viktor Shaytar still hold a commanding lead at the top of the drivers’ championship and look likely to pick up the trophy barring any major issues at both of the next two rounds.

For full standings click here or click on the Standings tab at the top of the page.