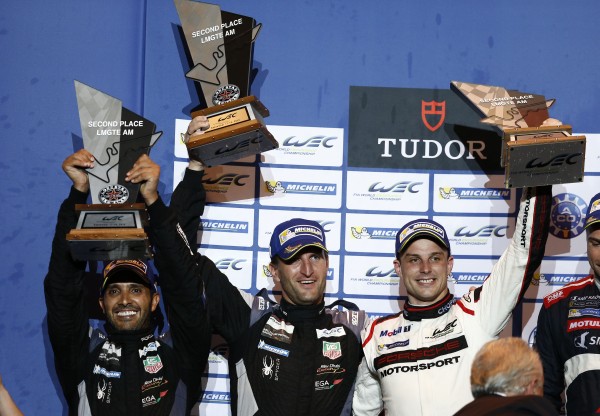 The #88 Abu Dhabi Proton Racing team finished the 6 Hours of the Circuit of the Americas in second position, just 40 seconds behind the victorious – and championship-leading – #72 Ferrari of SMP Racing. What’s more impressive is that Khaled Al Qubaisi, Christian Ried und Earl Bamber fought their way back through the field from last place on the grid.

Qualifying in Austin couldn’t have gone any worse for the Porsche customer team. Due to a technical defect on the car, the team were not able to participate and were forced to start the race dead last on the grid.

The race, however, was a different matter. The problem was fixed by mechanics, and Christian Ried made a lighting start in the Porsche 911 RSR. He made up several positions in the first few laps, before handing over to teammate Khaled Al Qubaisi, who moved up to fourth position by the second hour of the race. But the true star of the team is Le Mans winner Earl Bamber, who put in an incredible stint as the race continued into the Texan night, moving the Porsche up to second place. He also posted the fastest lap of the race in GTE Am of 2:07.177.

Disaster struck in the fourth hour of the race. Chasing the leading SMP Ferrari, Christian Ried suffered a blowout and was forced to pit, dropping the #88 car down to fourth position. Al Qubaisi took over at the wheel and maintained the Porsche’s position just short of the podium. In the final hour, the New Zealander Bamber took over for his last stint and gave absolutely everything. The effort paid off, with the Abu Dhabi Proton Racing team finishing the race in second position – their first podium of the season.

In an interview with WEC-Magazin, Khaled Al Qubaisi said it felt good to be back on the podium: “The key moment came after the tyre blowout. We didn’t lose sight of our goal, but had to fight even harder to achieve it.”