6 Hours of the Nurburgring: 3 hour report

The FIA World Endurance Championship returned to action after Le Mans at the Nurburgring today. With grand marshal Hans Stuck hailing the attendance as “the perfect scenario” and Motors TV commentator Graham Goodwin calling the venue “a fabulous place for a motor race” we were all set for a classic motor race. We take a look at what unfolded in the first three hours of the race. 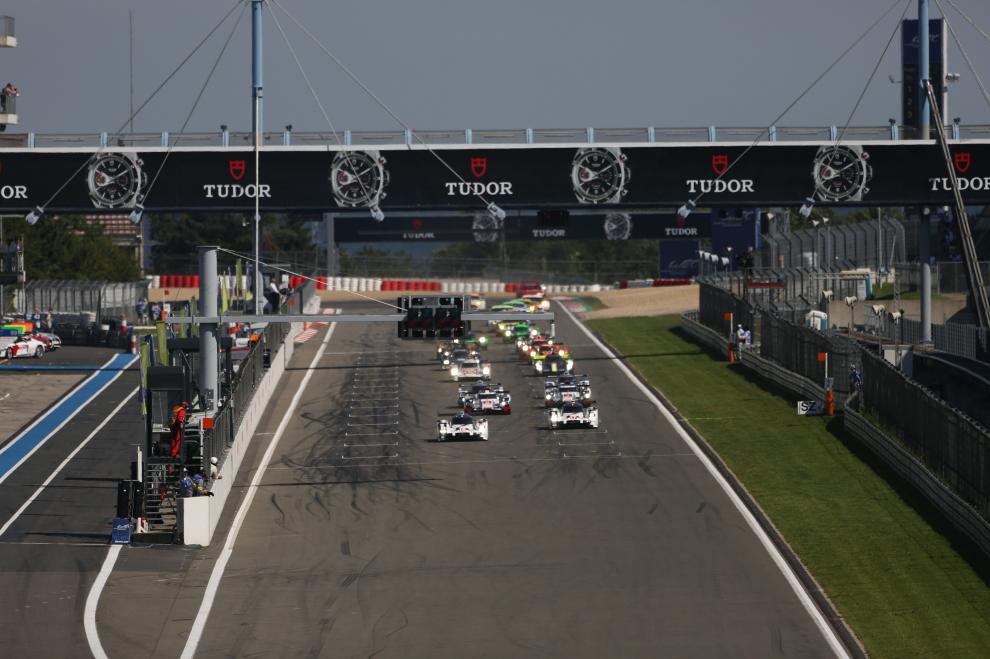 There was drama from before the race even started when the KCMG was slow away from the Le Mans staggered start. However, Tandy did eventually manage to get the ORECA 05 moving. By 10 minutes into the race, The Le Mans winner had a 3.4 second lead ahead of the two G-Drive Ligiers.

Just up the road in LMP1 Porsche led away with a fantastic start in formation from the grid positions. The pair of Audi’s went side by side round the first corner but also slotted into the race start formation. Jani led Bernhard ahead of Duval and Fassler. Jani began his charge early leading early by 3 seconds ahead of his own team mate after three laps.

Frederic Makowiecki and Micheal Christensen joined the Ferraris at the front of the GTE-PRO grid, with the Aston Martin’s slipping back. However Makowiecki dropped back after he picked up a drive through penalty for jumping the start, promoting the #91 car to third.

Meanwhile in GTE-AM the Proton team charged to the front with Patrick Long ahead of Earl Bamber. The pole sitting SMP Ferrari dropped to third. While the trio broke away with pace, and began hustling the back of the GTE-PRO category. However, after Bamber passed Mucke at turn 4, Mucke then hit Bamber knocking him down to last in class. 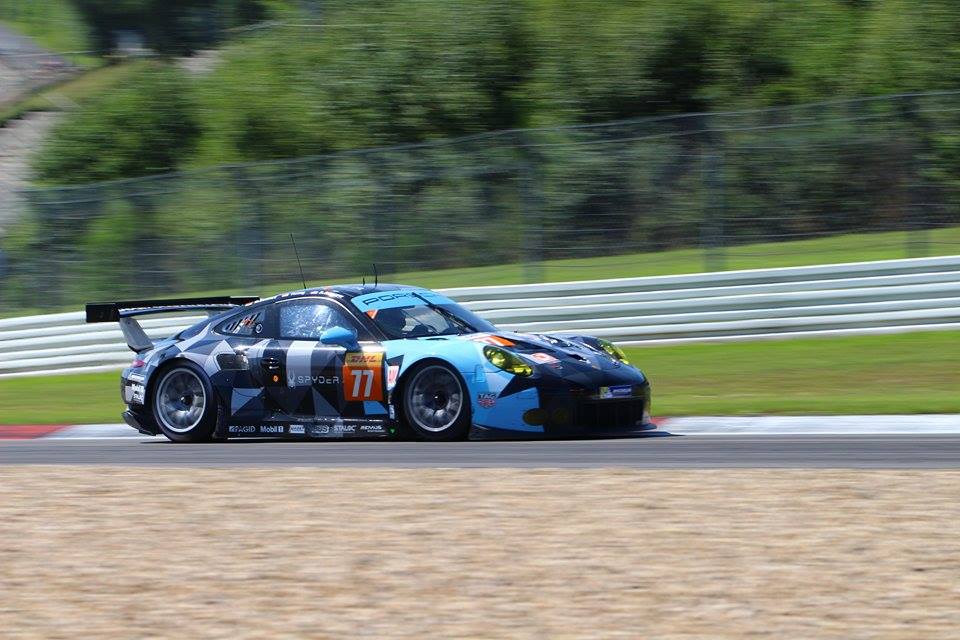 The GTE drama continued, this time with a PRO car in strife as the leading #51 car of Bruni and Vilander ground to a halt at the Dunlop curve, just 15 minutes into the race. With the AF Corse Ferrari still on the track with no power, the full course Yellow was scrambled to neutralise the race. The car re joined the track after the FCY was lifted. 2 laps into the re start however, Bruni pulled off the track at the same corner, making it a day to forget already for the Italian team.

Up in LMP1 there was no shortage of excitement. despite Neel Jani’s 15 second lead out front, the battle for second was white hot. Loic Duval’s Audi began pressing Timo Bernhard aboard the #17 Porsche 919, while his Audi team mate Marcel Fassler made it three in the battle for second place.

The #17 Porsche was then brought into the pits early on lap 24 due to front splitter damage. This would have put the Porsche out of sync with the other LMP1 cars, and let the Audi’s free to begin pressing on the #18 car of Neel Jani. However, Marcel Fassler shadowed the #17 car in in his #7 Audi. In the stop, Bernhard clambered out of the Porsche and Webber jumped in, whereas Fassler stayed aboard the #7 Audi R18 e-tron quattro. The stops were of a similar length, however, the #7 car passed the Porsche in the pits, because Porsche had to put on new front body work.

In GTE-AM, the battle for second place kicked up a gear when Pedro Lamy mounted a challenge on Victor Shiatar into turn one. The Portuguese driver took a late lunge and used all the track to get past the Russian. Despite the SMP Ferrari trying to go around the outside on the grass, Lamy held onto the position.

Meanwhile in LMP1, the #8 Audi finally pitted, however, Mark Webber aboard the #17 Porsche passed the Audi of Duval after setting a string of fastest laps, while the #8 was in the pits.

The leaders of LMP2 and LMP1, Nick Tandy and Neel Jani respectively pitted 55 minutes into the race, with longer stints than all of their direct challengers. Tandy stayed in his KCMG, whereas Jani handed the #18 Porsche 919 to Marc Lieb. The last cars in in LMP1 were Toyota after a 57 minute stint. Both the #1 and the #2 TS040s pitted together.

The second hour began with stops for the SMP Racing Ferrari 458 Italia and the pair of Team Manthey Porsches, while in LMP2, Johnny Kane had a trip through the gravel at the final corner. 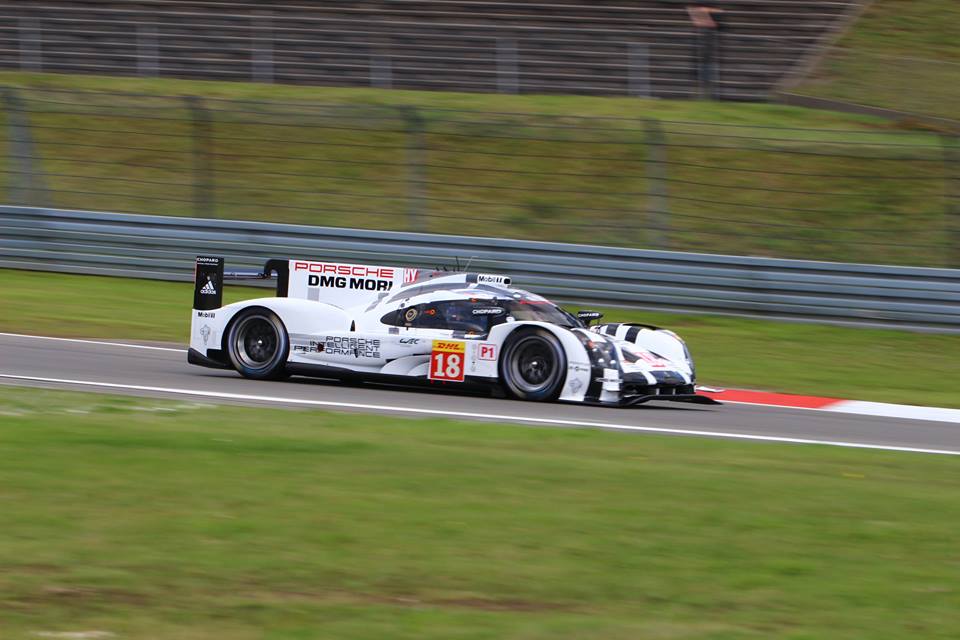 In the very early stages of the hour Mark Webber made a pass on the #7 Audi at turn 1 to reclaim second place and make it a Porsche 1-2 once again. Webber then began to close the gap with blistering pace aboard the #17 Porsche 919 Hybrid.

In GTE-AM Patrick Long finally brought the Dempsey Proton Porsche into the pits from first in class to hand over to Patrick Dempsey himself. The American had such a good stint, he was second overall in the GTE even though he was in the AM class.

Drama stuck the leading Porsche an hour and a half in to the race when a 5 second stop-go penalty was slammed on the #18 race leader for a technical infringement (sensor issue caused over boosted engine). This forced Lieb into the pits and back out alongside Webber in the sister car. It got to close for comfort when the two made contact on the exit of turn two after Lieb ran Webber off the track.

A seventeen second longer stop for KCMG saw Romain Rusinov in his G-Drive Ligier take the lead of the LMP2 class with 4 hours and 15 minutes to go. A couple of slow laps for the KCMG helped the Ligier close on the ORECA previous to the slow pit stop.

With 10 minutes to go in the hour, The #18 Porsche finally made it’s stop and lost the lead for the first time in the race, thanks to it’s 5 second stop go penalty. However it’s ride to pit road was extreme, with Marc Lieb putting all 4 wheels on the grass while passing the GTE-AM Corvette C7R of Larbre Competition. This put Brendon Harltey into the lead in his #17 Porsche ahead of the #18 sister car, with Andre Lotterer aboard the #7 Audi in third.

The hour started quietly with a full course yellow came out to help clear gravel that had culminated on the racing line at the final chicane. Once the race continued, the Porsches continued their blistering pace at the front of the field, with the nearest Audi the #7 of Andrew Lotterer 33 seconds off the lead.

However, heartbreak hit the Porsche team regards the #18. The earlier issue came back to bite them again when excessive fuel consumption in the car earned them a further 30 second stop go penalty. The penalty dropped the former leader down off of the podium moving #7 and #8 Audis up into second and third respectively.

In the mean time the GTE-PRO class was being treated to a fantastic battle for second between the #71 AF Corse Ferrari and the #92 Manthey Porsche. Calado led Makowiecki with the Porsche as close as possible up behind the Italian car for a long time, but despite battling hard, the pair were still the fastest two cars in the class

Matthew Howson drove superbly to re take the lead in LMP2 at turn one after leading earlier in the race. Despite making the move, Romain Rusinov in the #26 G-Drive car kept the British driver honest for a long time. 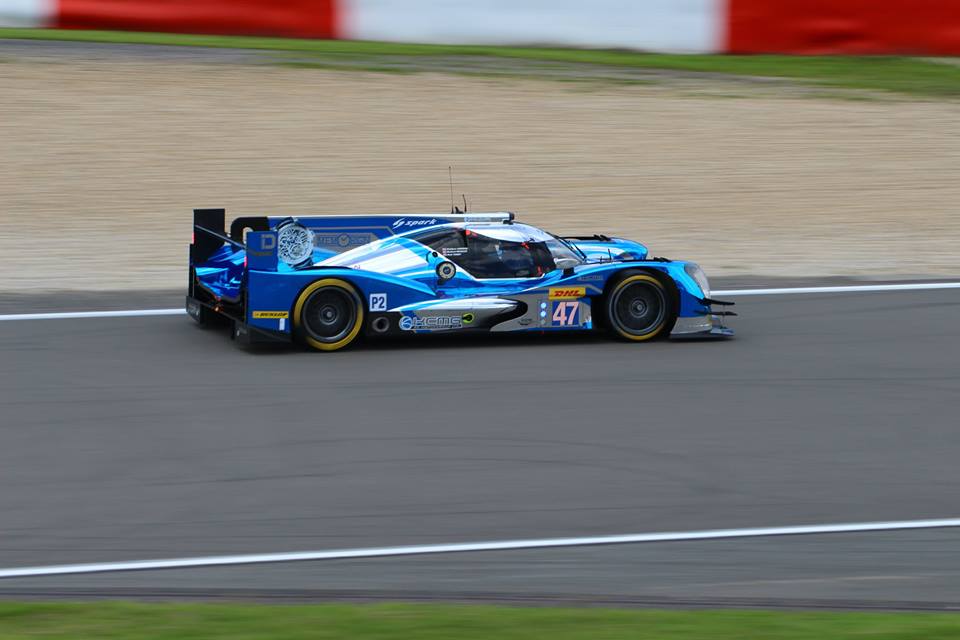 Back in LMP1 it was more strife for Porsche as a further 60 stop-go seconds penatly was slapped on the #18 Porsche for the same reason as the previous two penalties. This confirmed Audi to be in the box seat for a podium finish, but the order of the two Audis is far from decided. Di Grassi was closing on Lotterer for second position anyway, but when Lotterer got caught up in a fight between Christian Reid and Poulsen, Di Grassi found his way up to the rear wing of the #7 car very fast. The incident cost Lotterer 7 seconds to the leading #17 Porsche.

The battle between Calado and Makowiekci continued with Calado driving masterfully to keep the Porsche at bay. However, an incident at the Schumcher esses between the Proton Porsche and the ByKolles car saw the AM car spin and the ByKolles car pick up damage, which later saw Kaffer’s rear wing fall off down the main straight. Kaffer did a great job to get the car stopped with no rear wing, but the debris bought out a full course yellow. When the yellows were shown the Ferrari of Calado reacted before the Porsche which saw the German car drive into the back of the Ferrari. Both cars pitted straight away and the Ferrari held its position.

At the three hour and half way mark of the race, LMP1 was being led by the #17 Porsche of Webber, Hartley and Bernhard led the charging #7 Audi of Lotterer, Treluyer and Fassler. Third in class was being held by the #8 Audi being driven by Oliver Jarvis, Lucas Di Grassi and Loic Duval.

LMP2 sees KCMG in the lead with Matthew Howson behind the wheel. Second place belongs to Rusinov in his #26 G-Drive car and third the #28 G-Drive car of Gustavo Yacaman.

GTE-PRO sees Richard Lietz leading with Porsche 52 seconds ahead of the frentic battle between Calado and Frederic Makowiecki. Rigon and Pilet are now aboard those two cars. Pilet made it past the #71 car straight away on the restart, but Rigon thundered round the outside at turn one in an attempt to regain the position. Pilet then squeezed the Ferrari out on turn 4 after Rigon again tried around the outside of the Porsche.

And finally in GTE-AM there are three different cars in the top three places with Lauda in his Ferrari leading ahead of the Dempsey Proton car of Patrick Long and the Le Mans winning SMP Ferrari in third place.