This weekend sees the Circuit Spa-Francorchamps in the heart of the Ardennes play host to the 6 Hours of Silverstone. Ferrari dominated the first race of the season at Silverstone, taking victory in both GTE classes.

The entry list for the 6 Hours of Spa-Francorchamps shows no changes compared to the first race of the season. In GTE Pro, the smart money will be on Ferrari after AF Corse‘s one-two at Silverstone. Ignoring last year’s race, in which the leading #51 AF Corse car of Gianmaria Bruni and Toni Vilander was given a one-minute stop-go penalty with just 20 minutes of the race remaining – very likely costing it the victory – the AF Corse team recorded two victories and one second place at Spa between 2012 and 2014. Vilander may have since departed, but Bruni’s new teammate James Calado is more than a match for the Finn, as his fight back through the entire GTE field together with Bruni at Silverstone showed. In the sister #71 car, Sam Bird and Davide Rigon will have their tails up after a faultless performance at round one.

Elsewhere, Aston Martin Racing will be looking to improve on their third-place finish last-time out with the #95 of Nicky Thiim, Marco Sorensen and Darren Turner. AMR’s new Dunlop tyres are still undergoing development, and Aston Martin have rarely gone well at Spa, but last season’s victory for the #99 machine of Alex MacDowall, Richie Stanaway and Fernando Rees does some grounds for hope for the British manufacturer.

Porsche will hope to put a disastrous Silverstone behind them, in which four separate 911 RSRs suffered right-front failures (three in GTE Am, plus the sole GTE Pro entry). Once again Richard Lietz and Michael Christensen will be handling driving duties for the #77 Dempsey-Proton Racing car.

At Ford, the focus seems to be solely on Le Mans. Damp conditions at Silverstone certainly didn’t help the Chip Ganassi team’s preparations for the 2016 season, but there were no major issues for either the #66 or the #67 GTs. Ford will once again running their Le Mans driver line-ups, with Billy Johnson joining Stefan Mücke and Olivier Pla in the #66 car and Harry Tincknell partnering Marino Franchitti and Andy Priaulx in the #67 machine. 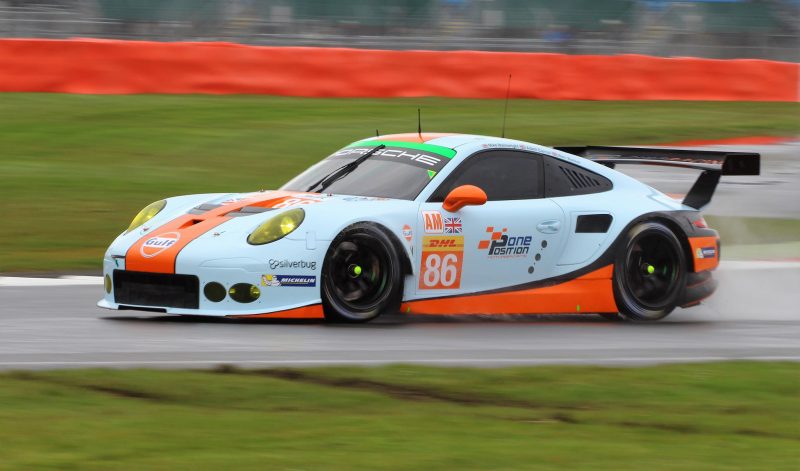 It’s a similar story in GTE Am, with only one minor change to the entry list compared to Silverstone. This comes for the #88 Abu Dhabi-Proton Racing Porsche 911 RSR, with US driver Pat Long replacing Klaus Bachler after missing the first round due to a clash with the Pirelli World Challenge race at Long Beach.

The three Porsches of KCMG (#78), Gulf Racing (#86) and Abu Dhabi-Proton Racing will be looking to bounce back after some serious issues at Silverstone. The Gulf Racing machine of Mike Wainwright, Adam Carroll and Ben Barker was taken out by Brendon Hartley in the Porsche 919 LMP1 car, while the #78 and #88 machines both suffered the same mechanical issues.

Victorious at Silverstone, the #83 AF Corse Ferrari 458 Italia of Collard/Aguas/Perrodo will be hoping to continue this form into the second round of the season. The #98 Aston Martin Racing Vantage V8 of Paul Dalla Lana, Pedro Lamy and Matthias Lauda won here convincingly last season and looked relatively strong at Silverstone, too. The #50 Larbre Competition Corvette C7.R rounds out the GTE Am grid, coming off a third-place finish in the first round of the season three weeks ago.