Round 2 of the 2016 FIA World Endurance Championship got underway at Spa-Francorchamps and the drama ensued. A tough day for Porsche and a strong fight between Audi and Toyota make up the headlines from the first half of the 6 Hours of Spa. 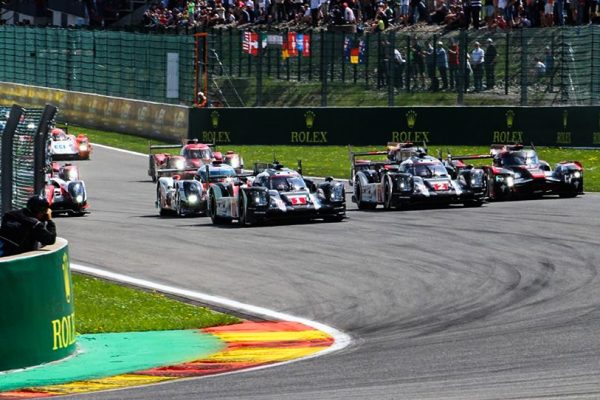 Audi charged  up to third and fourth positions at the start after what looked like a threatening start by Toyota fizzled out into 5th and 6th positions. The leading Toyota however of Conway kept the pressure on the Audi of Benoit Treluyer. Meanwhile Brendon Hartley extended his lead ahead of Marc Lieb’s #2 Porsche. Lucas di Grassi sitting the highest of the Audis in third.

Drama soon ensued in the LMP2 class. Roberto Mehri was tipped round into a spin at turn one by one of the Alpine cars before Vitally Petrov’s SMP car suffered a puncture, and then Nelson Panciatici came together with Pipo Derani at Le Combe. All cars despite their issues continued.

After the field settled down, LMP2 had Rene Rast lead the way in the #26 G-Drive car. Will Stevens sat in second position and the highest of the Manor cars. Nicolas Lapierre rounded out the top three in the  #36 Alpine.

Gianmaria Bruni lead GTE-PRO ahead of team mate Sam Bird in their pair of Ferrari 488s. Richie Stanaway was the best of the rest placing his Aston Martin third in class. GTE-AM was also lead by AF Corse Ferrari, this time by Rui Aguas. Pedro Lamy was second in the AM class for Aston Martin ahead of Porsche’s Patrick Long. 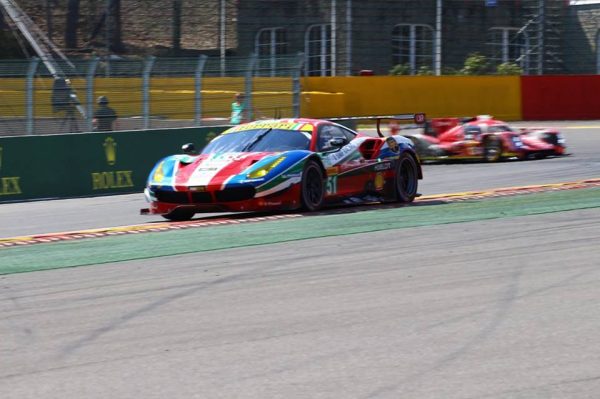 LMP1 then took it’s turn in the drama fifteen minutes into the race. Second place man Marc Lieb hit trouble and dropped dramatically in pace, falling to fifth. This promoted the Audi #8 of Lucas di Grassi up to second overall. Then both Toyotas made it past the #7 Audi of Treluyer. Buemi’s battle with his fellow Frenchman featured an attempt at a move around the outside at the famous Eau Rouge corner, however he was forced to run off the circuit and drop back in behind the Audi. Buemi then made the move stick into the bus stop chicane at the end of the same lap. Mike Conway followed through at the same corner a few laps later when Treluyer out braked himself.

Sebastian Buemi then set about closing down the #8 Audi of Formula E rival Lucas di Grassi. After several laps of being seemingly glued to the back of the new R18 e-tron quattro, the Frenchman made a bold and successful move on the inside of the Pouhon corner. Di Grassi however was to fight back, as coming out of the Paul Frere corner, the Brazilian made a move with two wheels on the grass to get himself on the inside line before Blanchimont, which saw the Audi back ahead of the Toyota, before Buemi then was the last of the late brakers at the bus stop chicane, pulling off a move around the outside under breaks.

In GTE-PRO the #67 Ford of Franchitti was collected by the leading GTE-AM car of Rui Aguas at Le Combe, sending both cars around. This handed the AM lead to the Aston Martin of Pedro Lamy.

Soon after, the #7 Audi made the first LMP1 pit stop of the race. The second car into the pits was the #2 car of Marc Lieb. The Porsche was still on the go slow, however was put back out on track, this time in the hands of Neel Jani. Buemi also pitted from second place, however was to be the only LMP1 car to not take new tyres after the first round of pit stops.

During the stops, Conway missed the braking point at the bus stop chicane and collected the #37 SMP BR-01. This forced both cars to go straight into the pit lane and also picked up a drive though penalty for the #6 car. Fortune however soon turned back in the favor of Toyota, as after the stops played out, their decision to keep Buemi on the same tyres left the #5 car in the lead of the race. 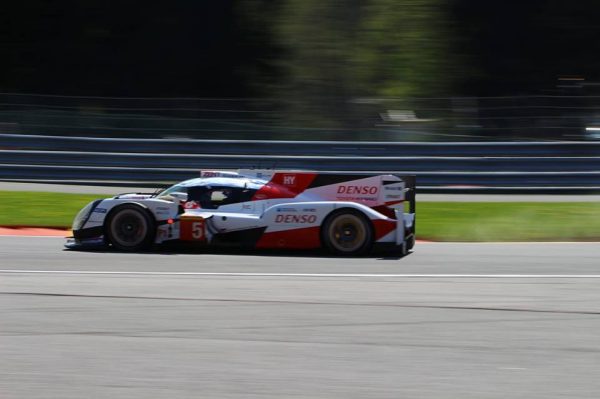 AF Corse had their #51 488 Ferrari at the head of the class ahead of the #71 car. Jonathan Adam was at the wheel of the third place Aston Martin. Pedro Lamy lead in GTE-AM ahead of the #83 AF Corse 458 Italia. KCMG was third in the AM class.

Sebastian Buemi continued on with his staggering pace in the Toyota #5 at the head of the field, and was leading by four seconds ahead of the #1 Porsche that sat in second position. However, ten minuets into the second hour, Timo Bernhard began closing down the gap.

Buemi made a mistake into the bus stop, being forced to take to the escape road. However Bernhard was stuck behind the ByKolles car, so Buemi didn’t loose the position. Bernhard did however slip past on the inside at La Source, but to only be re-past by Buemi back on the run down to Eau Rouge. Buemi presented a defending master class to keep the Porsche behind until a lap later at the top of Radillion, Bernhard suddenly slowed due to a left front puncture, forcing the #1 919 Hybrid into the pit lane, where Mark Webber climbed aboard.

Porsche’s second dose of misfortune gave Buemi a chance to breath at the front of the race with a 24 second lead and to focus on looking after to his older tyres relative to the rest of the LMP1 cars. It also promoted the #8 Audi into second place as well as Benoit Treluyer into third. 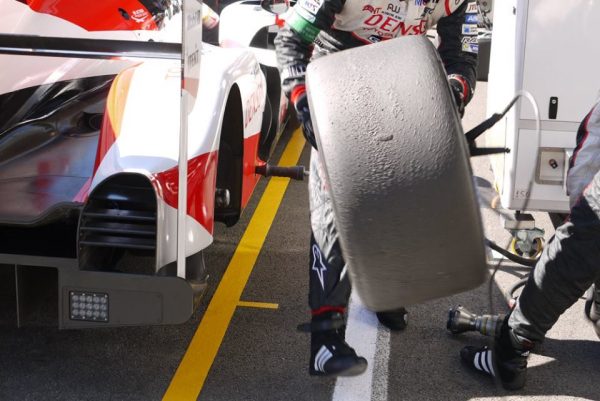 Toyota looked after their tyres

Porsche’s puncture then was to turn into poor luck for the Strakka team. Danny Watts was unfortunate to pick up the tyre carcass from the Porsche in the front body work of his LMP2 car, forcing it to slow until the former Porsche tyre was dislodged. In the meantime, the #7 Audi put a lap on the troubled #2 Porsche.

The 6 Hours of Spa seemed to be all about Porsche, but for all the wrong reasons. One and a half hours into the race, Mark Webber picked up another left front puncture in the #1 car a matter of minutes after Timo Bernhard suffered the same fate in the same car, taking Porsche’s day from bad to worse. One the Australian got back to the pit lane, the car was pulled back into the garage for repairs. Audi also had a stroke of bad luck as the #7 car was also backed into the garage, due to a suspected floor issue.

Over in GTE-AM, the former leading #83 Ferrari 458 Itallia picked up a drive through penalty for exceeding track limits.

Next into the pit lane was the #6 Toyota which had the rear body work panel replaced due to earlier contact. Then it was the turn of the leading #5 Toyota to come in. Buemi ended his perfect double stint and handed over the TS050 to Anthony Davidson. In the meantime, the hobbled #2 Porsche pitted from a staggering third position overall, considering the troubles that the 919 Hybrid had already faced in the race.

As soon as the pit stops were over, the race went under full course yellow (FCY) after contact between the #38 Jota G-Drive car of Simon Dolan and Nicki Thiim’s Aston Martin at the Paul Frere corner sent the Danish driver into the wall, causing a subsequent role over. Both drivers were un hurt, and Dolan continued on his way. Before the end of the FCY, the #7 Audi  and the #1 Porsche made their way out of the garage and back onto the track after loosing five laps each. 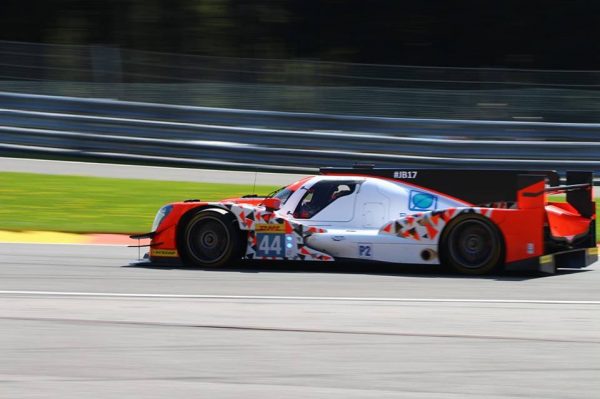 The race went green once more right at the end of the second hour.

At the end of the second hour the Anthony Davidson in the #5 Toyota continued to lead by 25 seconds ahead of the #8 Audi being driven by Loic Duval. Third position was held by the #6 Toyota of Kamui Kobayashi. Manor Racing had progressed up to lead the way in LMP2 ahead of former leading G-Drive Oreca. The Alpine was third in class. 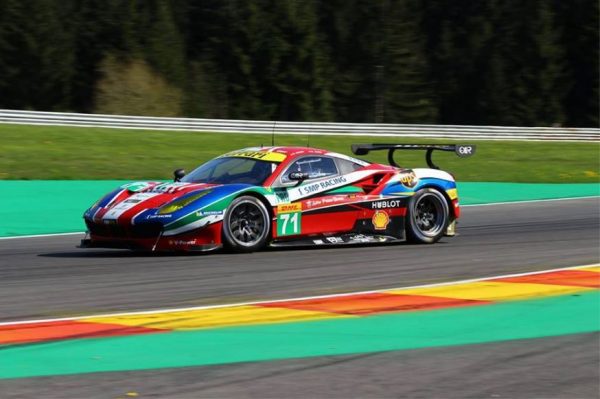 GTE-PRO saw no changes from the end of the first hour. Bruni still lead the way in the #51 Ferrari ahead of Sam Bird in the #71 Ferrari and Jonathan Adam in the #97 Aston Martin. Paul Dalla Lana was aboard the GTE-AM class leading Aston Martin at the turn of the hour. Khaled Al Qubaisi was placed second in class in the Proton Porsche ahead of the #50 Larbre Competition Corvette in third.

The third hour started with a puncture for the #26 G-Drive car of Nathanael Berthon. In the mean time, Toyota continued to extend it’s lead. At the end of the earlier FCY, the gap was at 25 seconds, but after roughly 15 minutes of green running, Davidson’s lead went out to 38 seconds.

The next action came courtesy of the #5o Larbre Competition Corvette and the rather anonymous #77 Porsche 911. Both cars were given a drive though penalty for exceeding track limits at the half way stage of the hour. The Larbre penalty meaning that the team was to loose third position on track to the Abu-Dhabi Proton team.

With thirty minutes to go until the half way stage, the stewards decision on the #38 Jota G-Drive’s clash with the #95 Aston Martin was finally made. The penalty going the way of the #38 crew being a 2 minute stop go.

GTE-AM then saw a spin for Michael Wainwright in the #96 Gulf Racing UK Porsche at turn 8. The British driver however continued on his way. Audi once again hit trouble with the #7 car in the mean time. Some rubber in the front air ducts forced the car into the garage to get the rubber out to prevent the car from over heating at a very hot Spa-Francorchamps.

Debris on on circuit brought out a full course yellow towards the end of the hour, however the race went green once more with five minutes left in the third hour. As the race entered the half way stage, the order looked like this.