The 14-car GTE Pro class is the largest seen at Le Mans since the World Endurance Championship’s inception in 2012. WEC stalwarts Ferrari and Aston Martin are joined by two Corvettes and additional entries from Ford and Porsche in what’s set to be an epic battle. 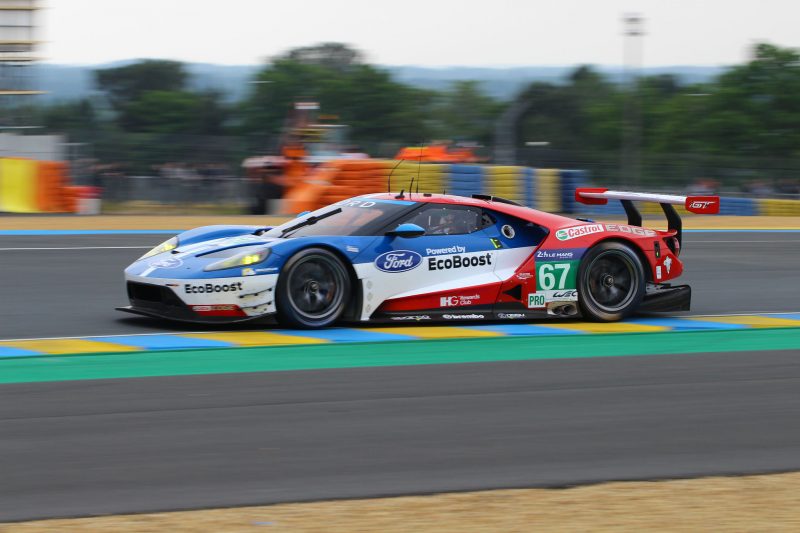 Reigning champions Corvette Racing are back with their now-customary pair of Chevrolet Corvette C7.Rs for 2016. Antonio Garcia, Jan Magnussen and Ricky Taylor will drive the #63 machine, while Oliver Gavin, Tommy Milner and Jordan Taylor will handle driving duties for the #64 car. It’s already been a hugely successful year for Corvette Racing following victories at two US classics, the Rolex 24 at Daytona and the 12 Hours of Sebring. Evidently learning from last year’s mistakes, when a practice shunt involving Jan Magnussen ruled the #64 out of the race, Corvette Racing will be bringing an additional chassis which will be on stand-by in the event of any issues.

Representing Italy’s finest is AF Corse with its pair of Ferrari 488s, which have dominated the WEC season so far. Gianmaria Bruni and James Calado are joined by Alessandro Per Guidi in the #51 car, while Andrea Bertolini partners Sam Bird and Davide Rigon for the #71. Bird and Rigon have won both of the first two rounds in 2016, whereas the #51 has been plagued by reliability issues (including an engine problem while leading within sight of the chequered flag at Spa). The Ferrari is the newest of the new GTE cars and has been pegged back in terms of balance of performance for Le Mans. AF Corse know how to run their cars, and the three-times world champions are certainly capable of being there or thereabouts come the end of the race.

Arguably the biggest talking point at Le Mans this year is the return of Ford on the 50th anniversary of its debut victory here in 1966. There will be an unprecedented four new-for-2016 GT40s, the two full-season WEC entries run Ford Chip Ganassi Team UK and the two IMSA Weathertech Sportscar Championship machines run by Ford Chip Ganassi Team USA. Taking charge of the #66 machine will be Olivier Pla, Stefan Mücke and Billy Johnson, while the #67 car will be in the hands of Marino Franchitti, Andy Priaulx and Harry Tincknell. Over from the US are Sébastien Bourdais, Joey Hand andDirk Müller in the #68 car and Ryan Briscoe, Scott Dixon and Richard Westbrook in the #69 machine. There has been much talk of whether Ford has shown its genuine pace so far, while reliability also remains a big question mark.

Porsche return to Le Mans with a three-car effort: two over from the US-based works programme and one WEC entry run by Dempsey-Proton Racing. Reigning GT drivers’ champion Richard Lietz is set to plot the #77 Dempsey Proton Racing car alongside Dane Michael Christensen and Austrian Philipp Eng – the latter making his debut at the Circuit de la Sarthe. Despite not being an official works entry, the #77 car does enjoy support from the Porsche Motorsport team. The fully works-entered #91 Porsche 911 RSR will be driven by Patrick Pilet, Kevin Estre and reigning Le Mans champion Nick Tandy. The sister #92 car will be driven by Frédéric Makowiecki, Jörg Bergmeister and – another reigning Le Mans champion – Earl Bamber.

So far this season Porsche have appeared to be off the pace somewhat, especially in the US where the team has only picked up one victory in the first five rounds (at Long Beach). However, the latest balance of performance adjustments raised the Porsche’s minimum weight, so the performance may indeed be there. We could be seeing shades of 2014 here, in which Porsche looked average in the run-up to Le Mans before wiping the floor with everyone and finishing one-two in class.

Another US entrant is the famous name of Risi Competizione running, of course, a Ferrari 488. Former AF Corse drivers Giancarlo Fisichella and Toni Vilander are joined by Matteo Malucelli in the “outsider” #82 car. We haven’t exactly seen fireworks from Risi over the past few years, but consistency and five podiums in the 2015 IMSA Tudor Sportscar Championship saw the US team finish fourth in the championship. Vilander should strengthen the team, having won at Le Mans both in 2012 and in 2014. Malucelli’s last Le Mans appearance came in 2013, when the 31-year-old Italian finished sixth with Gianmaria Bruni and Fisichella.

Last but not least comes Aston Martin Racing with a pair of Aston Martin Vantages. Piloting the #95 machine will be Danes Nicki Thiim and Marco Sorensen and British driver Darren Turner, while the #97 car will be driven by Johnny Adam, Fernando Rees and Richie Stanaway. It’s been eight years since Aston Martin last won in class here. Numerous opportunities have fallen by the wayside, perhaps most notably Bruno Senna’s accident while leading by two minutes in 2013. Arguably the most important part of Aston Martin’s programme this year is the addition of Dunlop tyres. With all other GTE Pro and Am cars running on Michelin tyres, could AMR win the tyre war and finally record a GTE Pro victory at the Circuit de la Sarthe?