The entry list for the 2022 24 Hours of Le Mans has been revealed, with a total of 62 cars set to compete at the Circuit de la Sarthe in June.

The original list had been due for release a number of weeks ago. However, the machinations of Russia’s invasion of Ukraine and the subsequent sanctions imposed on many Russian companies and banks evidently impacted a number of teams’ plans.

The Hypercar class will feature five cars: two Toyota GR010 Hybrids, a pair of Glickenhaus 007 LMHs and a sole Alpine A480 – Gibson. Toyota Gazoo Racing will be looking to record their fifth victory in succession at Le Mans, which would see the Japanese manufacturer overtake Ford and Alfa Romeo to become the sixth most successful marque at the famous endurance race.

Having decided to postpone their debut “until the summer” – likely until the 6 Hours of Monza in July – the French manufacturer is absent from the list. Despite much-publicised efforts to find a buyer for an as-yet-unbuilt third car, Glickenhaus Racing will only be present at La Sarthe with two.

A swathe of new cars are set to make their Le Mans debuts in the Hypercar class from 2023, including Porsche, Ferrari and Peugeot.

The GTE Pro is back to something resembling a healthy entry of seven cars. Corvette Racing make a much-welcome return to Le Mans with its single WEC full-season entry and a second C8.R from the US.

The other guest entry in the GTE Pro comes from US squad Riley Motorsports, who will be entering a Ferrari 488 GTE EVO with Felipe Fraga, Nick Tandy and Shane van Gisbergen. Two-time V8 Supercars champion Van Gisbergen, who also has victories at the Bathurst 12 Hour and the Bathurst 1000 to his name, will be making his long-awaited debut at Le Mans.

LMP2 will feature a bumper 27-car entry for the 2022 edition of the 24 Hours of Le Mans. Almost all of the entries will be Oreca 07 – Gibsons, with the exception of a single Ligier JSP217 – Gibson entered by Spanish squad CD Sport.

Algarve Pro Racing is arguably the biggest story in the LMP2, having been affected most by the Russian sanctions due to its relationship with G-Drive Racing. The Portuguese-flagged squad has confirmed a two-car entry in the Pro/Am subclass of LMP2.

Touch of Hollywood in GTE Am

Hollywood is returning to the 24 Hours of Le Mans in 2022. Actor Michael Fassbender, famous for his roles in Inglourious Basterds and the X-Men franchise, will race in a Proton Competition Porsche 911 RSR-19 alongside Matt Campbell and another as-yet-unconfirmed driver.

Fassbender has been competing in the European Le Mans Series for the past two years and is the latest in a long line of actors – including Steve McQueen, Paul Newman and Patrick Dempsey – to make the pilgrimage to La Sarthe.

The 2022 24 Hours of Le Mans begins at 4:00 pm local time on Saturday 11 June. Check our Calendar page for the latest schedule. 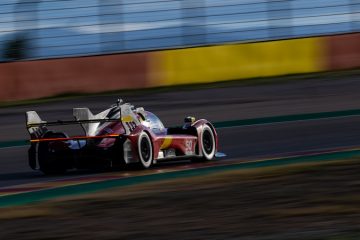 The FIA World Endurance Championship has confirmed the field for the 2023 season. In a breakthrough year for the series’ top category, no less than 13 cars will competing for the full season in Hypercar. Read more…